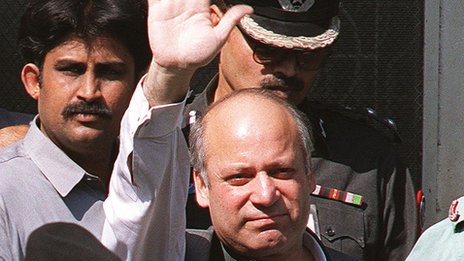 ISLAMABAD, Pakistan, Oct. 20— The military said today that Nawaz Sharif, the Prime Minister the army overthrew last week, is being investigated for corruption, including stealing hundreds of millions of dollars from state banks.

This kind of challenge to Pakistan’s politicians is popular among ordinary Pakistanis and has been presented by the military as justification for seizing power from the elected Government last week. It is routine in Pakistan for a new Government to investigate its predecessor and for corruption charges to become the fodder of political vendettas.

Even before Mr. Sharif was overthrown, federal investigators in his Government and the one before him, under his rival, Benazir Bhutto, had compiled evidence against him. It suggests that Mr. Sharif was part of a longstanding culture of corruption that has nearly bankrupted the country and turned its political parties into criminal enterprises.

Pakistan, a nation of more than 140 million people, has about $1.4 billion in its treasury. Its national banks say they are holding at least $4 billion in unsecured loans.

And at least 70 percent of those bad loans can be traced to the democratically elected leaders who held power over the past decade, along with their families and friends and politically powerful military officers, according to state bank records and interviews with senior bankers and former Government officials.

Their use of unsecured loans has ”brought the banking system down on its knees and rocked the financial stability of the nation,” said Mehriyar Pataudi, senior vice president of Askari Commercial Bank. ”The national banks have been treated as coffers for people who took money without a thought of having to return it.”

The corruption accusations against Mr. Sharif have yet to be proved in the nation’s politically crippled courts. But the evidence suggests that Pakistan’s rulers in recent years have collectively beggared their country.

Mr. Sharif, the ousted Prime Minister, has been held in isolation at one of his residences near Islamabad since the coup last week. Repeated attempts this week to reach him, his Government spokesman, who was also being held, and representatives of his Government and his family have been unsuccessful.

Mr. Sharif has not been formally accused of any crime since beginning his second term as Prime Minister in 1997.

But he was accused in a formal report, submitted last year to Pakistan’s President, of theft from the state, money laundering and fraud, including taking hundreds of millions of dollars in bad loans from state banks.

The origins of that report date to Mr. Sharif’s first term as Prime Minister, which ended in 1993, when he was dismissed, constitutionally, by Pakistan’s President for allowing corruption to flourish in Government institutions, including state-controlled banks.

In that same year, 1993, Mr. Sharif, a multimillionaire even before taking power, paid $60 in income tax. He has never paid a tax judgment of $50 million levied against him in 1995.

The investigation into Mr. Sharif’s alleged wrongdoing nonetheless continued and, after a five-year inquiry, culminated in a report written by Rehman Malik, then deputy director of the nation’s top criminal investigative agency. In 1997 Mr. Sharif suppressed the final draft of the report and threw Mr. Malik into solitary confinement for almost a year.

The report, which has been reviewed by The New York Times, said Mr. Sharif used ill-gotten gains to buy, among other things, a $5 million family pied-a-terre in London. It was, the report alleged, one of four apartments bought with laundered money siphoned from Pakistani banks.

”The extent and magnitude of this corruption is so staggering that it has put the very integrity of the country at stake,” the report said.

Mr. Malik said in an interview from London, where he now lives, that Mr. Sharif and his family had taken hundreds of millions of dollars from Pakistan’s banks.

”No other leader of Pakistan has taken that much money from the banks,” he said. He added that Mr. Sharif had no fear of prosecution while he was Prime Minister. ”There is no rule of law in Pakistan,” he said. ”It doesn’t exist.”

He and his family, the report said, used dummy companies as repositories for millions of dollars. It cited, in detail, the family’s purchase of its properties in London as one example.

The report documented the following transactions:

*Mr. Sharif used a close friend’s nephew to open three dummy accounts at a Swiss bank in the names of non-existent people.

*At least $3.8 million flowed into those dummy accounts from two other accounts at a bank in Lahore, Mr. Sharif’s hometown. It said those accounts were opened in the names of two Pakistanis who lived in London and had nothing to do with the transaction.

*The Swiss bank funds, it said, were used to purchase the London property, where two of Mr. Sharif’s children live, through two offshore companies registered in the British Virgin Islands.

Ittefaq, a company that began as a small foundry, was started by Mr. Sharif’s father, Mohammad, a blacksmith. But as Mr. Sharif rose to power, the company grew to become ”an unparalleled industrial empire in Pakistan,” the report said.

When he served as a minister under Pakistan’s last military dictator, Gen. Zia ul-Haq, who seized power in 1977, the foundry became a diversified holding company of nine industrial concerns. By the middle of his first term as Prime Minister, it had grown to 30 companies.

The growth of Ittefaq was financed in part by at least $200 million in unsecured loans from Pakistan’s banks, the report said.

The use of nationalized banks as cash cows has destabilized Pakistan, according to bankers and politicians, and has created a climate in which legitimate loans became hard to find, international lenders looked askance and the nation’s reputation as a sinkhole for finance capital deepened.

”Pakistan is a criminal society,” said Irshadullah Khan, a prominent businessman and former Rhodes scholar. ”Our banking system is the most corrupt in the world.”

[Note: Once again, this New York Times article, published in 1999, makes references towards Swiss Accounts, large transactions and money laundering activities; no Pakistani court could ever prove these charges, though these were published and were part of Pakistani investigations and FIA Reports – Panama Leaks are merely giving credibility to these old alleged crimes; Can a Pakistani Govt Commission successfully investigate all this?]