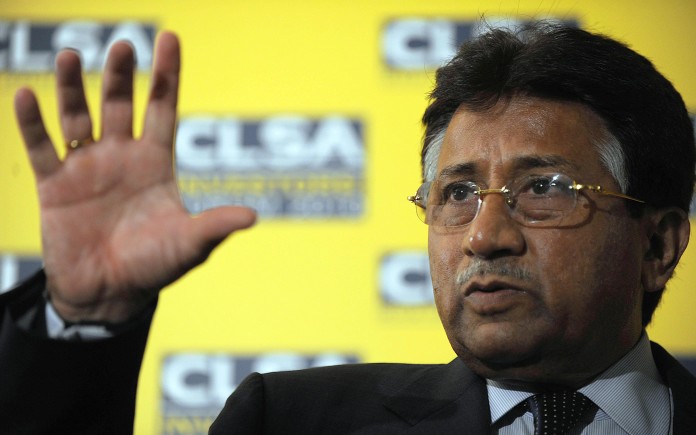 RECENTLY, in Karachi, a poor man living on the coast, went fishing and caught a big fish. Happy with his catch, he gave the fish to his wife to cook. But the disgruntled wife shouted: “Throw it, stupid man… I cannot cook; we have no gas, no electricity, no atta (flour) and no cooking oil.” The disappointed man went back and threw the fish into the water. It is said the fish then jumped back to the surface and shouted, “GEO Musharraf!” (Long live Musharraf).

Someone sent this to me as a text. And many such arrive almost every day. I had read somewhere that if you want to know a people, watch their dances for bodies never lie. I think the same is true of the jokes. They too have a weird, uncanny window to the pubic mind. And the interesting thing is not that there are these jokes; every dictator, perhaps every ruler is subject to this juicy gossip mill; what I find interesting is how increasingly these comic life forms are drained of their earlier acidity. Could it be that just like the political field the retired generalissimo has managed to exorcise the public mind of its venom against him? More importantly, is he on a path to a successful resurrection of his image?

It is time to make confessions. Many of us in the media were far too quick to write him off. One such journalist was my friend, Omar Warraich. Immediately after the first sacking of the Justice Iftikhar Chowdhry that had kick-started the lawyers’ movement in March 2007, he penned down an op-ed, in Guardian, with clear prognosis: “The End of the General.” A few days ago, we met again in Islamabad. And while reflecting on the thick steam clouds rising from his mulligatawny soup bowl, Omar confessed that it is embarrassing to recollect how hasty his conclusions were. I sympathised wholeheartedly. I think I also added patronisingly, “We all make our misjudgments.”

I was patently dishonest. I should have told him that how seriously I had believed this: The “beginning of the end” theory. And not only on March 9, but again on November 3, I spent hours convincing everyone around me and on top of it myself that the good general simply cannot tide this over.

I think Bertrand Russell had written somewhere that most people are more happy and excited in the days of war as long as it does not mean a personal loss. And on November 3, the day emergency was imposed, I found myself amidst a whole crowd of mediapersons possessed by the same frenzy, the kind of which makes you believe that something big is about to happen; history is being made and we are part of it, that sort of excitement. In that mood I confronted a stony faced senior colleague much known for his radical activism as an once powerful editor. And I tried marketing this “beginning of the end” thesis to him. His sombre face lit up with an ironic smile and he said, “I am afraid, he has rather saved himself.” And on hearing that cynical remark, I told myself, “Oh! He simply does not get it.”

A few days ago, we were again together in the newsroom. President Musharraf was on TV screens giving a rather brash dressing to the Western Press core, telling them more or less that they don’t understand this country; neither know the language, nor the culture and merely rely upon translators to understand. I remarked, “How desperate he sounds!” And my senior colleague said wryly, “Desperate? I think he is getting confident.” And this time around I knew that he knows better. And then he added, “I think they miscalculated; they don’t understand this country.” I did not ask him who are “they” for I knew what he meant.

Looking back at all these weeks since the imposition of emergency, I think Musharraf’s strategy of deliberate escalation and then a pre-planned step wise de-escalation, which he effectively managed at his own pace, has given him political dividends all along the way. His principal aim on November 3 was decapitation of the judiciary; rest of all including his fight with the media was an inevitable default of that option. But at every step down the hill – ending the emergency, easing restrictions on most of the media, taking off his uniform and announcing the elections, he managed to control domestic passions and international  concerns.

Let there be no mistake: I am not giving him any credits for sincerity or for substance; I am only deconstructing his technique and apparently it worked. Though courts are powerless to restrict the executive, but he takes the credit for lifting the emergency; the army is behind him, but he is without uniform; the media are tamed but he can point to fifty television channels as he just did in a public meeting in Brussels. His arguments may be flawed, but he ensures that they are half true. The most important message he has conveyed, internally and externally, is that: he is still the man who can control.

Musharraf’s gradual tiding over the storm that erupted with Bhutto’s assassination only reinforced this point. Only Gordon Brown might know what Scotland Yard found out in Pindi, but no one will deny that their presence certainly helped ease out the pressures on Musharraf government. And now Brig (retd) Cheema of Pakistan’s Ministry of Interior has earned the rare distinction that his rather hasty pronouncements on Bhutto’s murder investigation have been seconded by CIA.

Connect the dots and President Musharraf appears all set to be with us for a few more years. The only tiny weenie puzzle is: how to hold the coming elections in a way that they still look like elections. But looking at his impressive resume so far, I am sure he will find a way out.