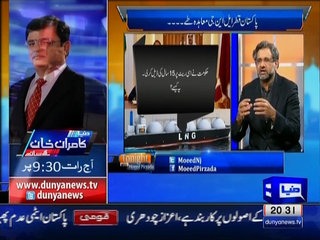 In this part Dr. Pirzada raised critical questions in front of Federal Minister for Petroleum and Natural Resources Shahid Khaqan Abbasi on LNG deal regarding its cost on which we are receiving LNG and at what cost it will be available to end users as many conspiracies have circulated regarding this deal specifically the Price of imported LNG. Pakistan on Wednesday had signed a 15-year agreement to import up to 3.75 million tonnes of liquefied natural gas a year from Qatar, a major step in filling Pakistan’s energy shortfall. Pakistan and Qatar signed The $16 billion sale and purchase agreement on Wednesday the long-awaited multi-billion dollar liquefied natural gas (LNG) deal which would see it import the fuel for 16 years to meet domestic energy requirements.