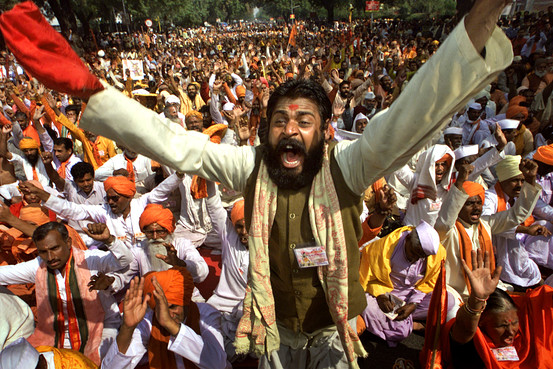 James Feibleman had stated, “A myth is a religion in which no one any longer believes.” Just a few weeks before Indian Prime Minister Narendra Modi addressed the US Congress (8 June 2016) – bragging-about India’s success story, á-la Hollywood’s epic “Slumdog Millionaire – a student leader out on bail from made-up sedition charges struck-a-chord with many Indians: “We don’t want freedom from India, we want freedom in India.”

Never mind Mr. Modi was denied an American visa in 2005 for his controversial role as chief minister of Gujarat during anti-Muslim riots in 2002. However, while India has skillfully branded itself as “Shining” and “Modified” – an allusion to Mr. Modi and his Bharatia Janata Party’s (BJP) landslide victory in May 2014 elections – the country’s inherent discrepancies impede its rise to global stature. Despite impressive economic growth in recent years, its ‘hegemonic mindset’ not only keeps India embroiled in communal violence, political manipulations and insurgencies internally; it also keeps India entrapped in territorial disputes regionally.

India’s problem is its radical Hinduism – the extreme ideologies of “Hidutva” (Hindu nationalism) and “Akhand Bharat” (greater Hindustan). These dogmas, espoused by the BJP and its associated right-wing Sangh Parivar, consisting of groups like the extremist and cult-like Rashtriya Swayamsevak Sangh (RSS) – are so well-entrenched in Indian psyche that even the (secular) Congress party could not stamp out Hindu-Muslim pogroms, age-old caste-system, discrimination against ethnic groups, and continuous interference in the domestic affairs of neighbouring countries.

With BJP coming into power, Mr. Modi’s mother-organization – the RSS – took centre-stage and started spreading a climate of intolerance. It began with lynching a man for allegedly eating beef and threatened Muslims against slaughtering cows (due to the animal’s sacredness in Hindu religion). RSS’s Hindu deification campaigns through ‘Ghar Wapsi’ (return to mother faith by inciting minority Christians and Muslims to convert to Hinduism) as well as ‘Love Jihad’ (discouraging Hindu girls from marrying Muslim boys), stigmatized the Indian society to such an extent that dozens of prominent artists, scientists, and writers returned their national awards as a mark of protest.

RSS carries notoriety not only in the persecution of minorities but also in Hindu-cleansing. A Hindu mob first demolished Babri Masjid – a sixteenth-century mosque in Ayodhya – on 6 December 1992, and the ensuing violence resulted in the death of some 2,000 people. The Gujarat massacre of some 1,000 Muslims under Mr. Modi’s watch is another blot on secular India. On 17 January 2016, a 26-year-old PhD student, Rohith Vermula – belonging to the (lowest) Dalit caste – had to commit suicide by hanging himself at the University of Hyderabad after BJP stalwarts, including two ministers, labeled him “anti-national” and “castiest.” Furthermore, a student leader at Jawaharlal Nehru University, Kanhaiya Kumar (mentioned-above), was arrested by police in February 2016 on fabricated sedition charges by another BJP minister.

In an excellent dissection of Mr. Modi and his supporters, Siddhartha Debb notes: They admire “a kind of unmoored nihilism that dresses itself in religious colors and acts through violence, that is ruthlessly authoritarian in the face of diversity and dissent, and that imprints the brute force of its majoritarianism wherever it is in power.” Debb continues, “They assail the ‘anti-nationals’ who stand in their way, beating and molesting people while shouting, ‘Bharat Mata Ki Jai’ [Long-live mother India].” In its scathing criticism, Human Rights Watch noted “India’s abusive laws are the hallmark of a repressive society, not a vibrant democracy.”

While India’s democratic credentials are lauded, one must be mindful of the ills of its multi-party system. First, in cobbling together alliances to form governments, bribery, corruption, and foul-play become rampant. Secondly, political-party machinations often lead to a government’s fall, sometimes forcing fresh elections – demonstrating political volatility and causing a heavy toll on the exchequer. From 1989 to 1999, India saw no less than five elections with seven prime ministers. The possibility of enjoying only a short time in power can generate rash decisions. In Inside Nuclear South Asia, Kanti Bajpai points out the motive behind the BJP government (a coalition of 20-odd parties) carrying-out nuclear tests within just three-months of coming into power in 1998 – Prime Minister Atal Bihari Vajpayee’s “fear that his second stint as prime minister might not be very long;” a trepidation brought home by Mr. Vajpayee’s previous time in office in 1996, which only lasted 13 days.

Repression, social injustice, and economic deprivation further make India home to a number of insurgencies. The struggle in Jammu and Kashmir led India to deploy nearly 700,000 troops in the valley, granting unrestrained powers through the much-abused and condemned Armed Forces Special Powers Act. Meanwhile, the Sikh community’s Khalistan movement has been reincarnated after it was brutally crushed in 1984. The president of the Sikh-centric political party Shiromani Akali Dal, Simranjit Singh Mann, demanded (in June 2015) a state of Khalistan to act as a buffer between India, China and Pakistan. Meanwhile, an overseas Khalistan-2020 referendum-drive for Sikh homeland has gained momentum and demands have been made for a UN inquiry to probe Golden Temple massacre 32 years ago. Finally, India is occupied in a full-blown Naxalite-Maoist insurgency since 1967 in its eastern “red corridor” and “seven-sister-states.” Castigating India, famed writer and social activist Arundhati Roy noted there has not been a day since 1947 when the Indian army has not been deployed against its own people.

Furthermore, India’s hegemonic mindset – or its Greater Hindustan notion – has often contributed to tense relations with neighbouring countries. Following the 1962 Sino-Indian War, India remains mired in territorial disputes over Aksai Chin and Ladakh regions in the west (claimed by India) as well as south of the McMahon Line at Arunachal Pradesh in the east (claimed by China). Nepal, on the other hand, claims Kalapani, which India forcibly took in 1962. In fact, on allegations that India was trying to topple his government, Prime Minister K.P. Oli cancelled the Nepalese president’s visit to India and recalled his ambassador in May 2016.

India’s dubious role in Sri Lanka’s 26-year-long civil war against Liberation Tigers of Tamil Eelam (LTTE) – where initially the Indian army (as peacekeepers) supported the LTTE only to change tack in the end – demonstrates the country’s expansionist proclivities. The assassination of Indian Prime Minister Rajiv Gandhi at the hands of LTTE in May 1991 reveals the group’s rancour about this about-face. Moreover, it took India 68 years to settle its dispute over 162 enclaves in the Bay of Bengal with Bangladesh; yet Bangladesh continues to lament reduction of water in the River Ganges – and floods during Monsoon – due to India’s Farakka Barrage on Ganges. Wary of India’s interference, Bangladesh denies India trans-country access to India’s northeastern seven-sister-states.

India-Pakistan rivalry, meanwhile, remains deep-rooted and intense (for some perspective see here and here). The arrest of a serving Indian naval commander spying for Indian intelligence in March 2016 provides a good reminder of India’s meddling in Pakistan. Despite having fought three wars (plus five close-calls in 1986–87, 1990–91, 1999, 2001–02, and 2008), the major dispute over the princely state of Jammu and Kashmir continues to afflict their relations since subcontinent’s partition. Another dispute over a 60-mile-long tidal estuary, called Sir-Creek, also remains unresolved – largely due to India’s political obduracy rather than any legal hindrance. Furthermore, India clandestinely occupied Siachen glacier in April 1984. Said to be the highest battlefield on earth, the harsh weather conditions have led to a steady number of fatalities for this otherwise nonsensical troop presence.

Stephen Cohen, an authority on South-Asia, notes in his book Shooting for a Century: “Normalization [in relations] is as much in India’s interest as in Pakistan’s. New Delhi will have difficulty ‘rising,’ ‘emerging,’ or becoming one of the major powers of Asia if it has to haul a wounded Pakistan around.”

In order to join global elite, India needs to change its outlook and address its internal inconsistencies. India’s “geospatial information regulation bill” proposing heavy penalties for representing India’s geographical boundaries against its wishes is absurd, to say the least. India’s domineering approach has already put it at odds with the very purpose of the South-Asian Association for Regional Cooperation. India must also stop acting like an American Sheriff in the region, following its signing of a few nuclear and defence deals with the US. Having hurt its non-aligned credentials by courting the former Soviet Union during Cold War, India’s ‘Bollywood style offerings’ to the US – presenting itself as a countervailing force against China – only diminishes its international standing. But then its the India’s charm that speaks when US Admiral Harry Harris admits his Pacific Command stretches “from Hollywood to Bollywood.”

However, as Hollywood’s Spiderman said, “With great power comes great responsibility;” India’s time to fame is yet to arrive.

Adnan Qaiser is a political and defence analyst having had a distinguished career in the armed forces as well as in international diplomacy and public and social sector development. He can be reached at: a.qaiser1@yahoo.com