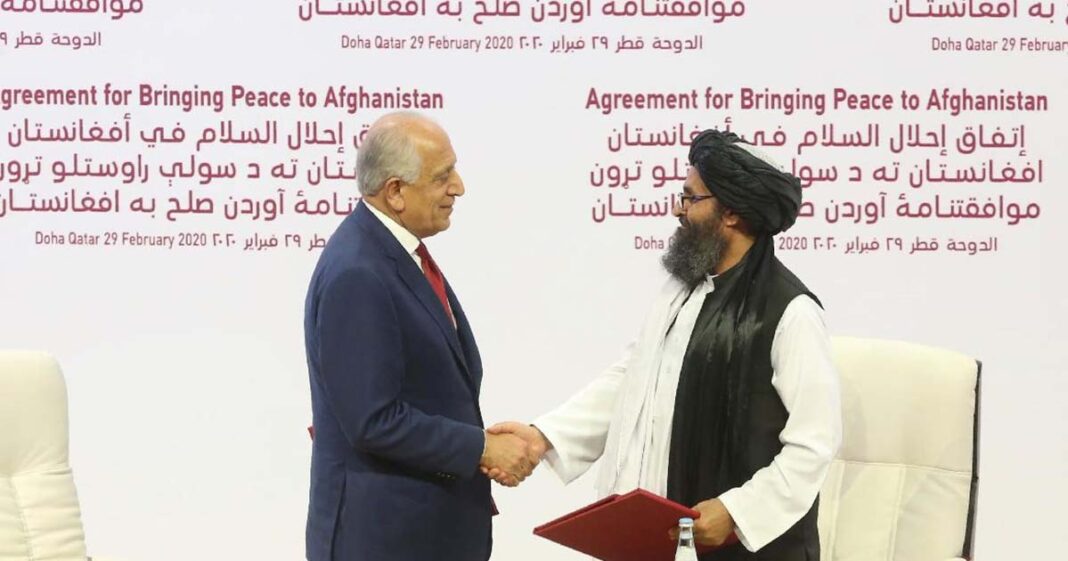 Peace Agreement signed in Doha between the US and Taliban is certainly historic and a moral victory for Pakistan. But New Delhi is bound to see it as a strategic reversal and will react in its own ways. Without Pakistan engaging India, to allay its fears, peace in Afghanistan remains uncertain. Editor GVS examines.

The “Agreement for Bringing Peace to Afghanistan” signed between Afghan Taliban and the US in Doha on 29th February is a development of huge historic significance for Afghanistan, Pakistan, India, Qatar and the whole region – and off course the United States.

This was and still is, United States’ longest war in its own history that began on Oct 7, 2001 when the US and the UK started bombing on Taliban ruled Afghanistan exactly 25 days after the terrorist attacks on World Trade Centre that killed more than 2000 innocent men and women in downtown Manhattan.

Since then more than 100 well researched books, hundreds of policy papers (more than 100 in US publication, Foreign Affairs alone) and thousands of media reports have been written or broadcast about this conflict – yet there is no consensus or clarity across the dividing lines on why United States was in Afghanistan and what was it trying to achieve.

Was the US preventing another 9/11, was it on a nation building mission or it wanted to use Afghanistan as a strategic outpost (like South Korea) against China, Pakistan, Iran and Russia?

On 29th Feb, two agreements were signed; one was at Doha and the other was in Kabul. Zalmay Khalilzad, US Special Envoy and Mullah Baradar, Taliban’s point man signed in Doha while Pakistani delegation observed – Afghan government was not part of this deal

Perhaps opposing sides to this conflict will never be able to agree on the real motivations of the United States – just like there has never been a consensus on why the Soviets entered Afghanistan in December of 1979. Just consider this: to this day Taliban are not convinced that Al Qaeda planned 9/11 sitting from within Afghanistan -and one can imagine the agreement on other issues.

Today – according to a report in New York Times – youngest US soldiers serving in Afghanistan were born after 9/11, they have no idea why they are there, most US public is disgusted by this unending war and it’s not only Trump but all presidential candidates for 2020 want the troops to come home. In the end, war is ending due to internal US political dynamics, past is dead, mystifying and perplexing; everyone is tired and it’s time to move forward into future.

Many US and western analysts will continue to find excuses – like sanctuaries in Pakistan, disunity among Afghans, interference from neighbouring countries, capacity issues of Afghan National Army – for a “good war” to have gone astray but the fact remains that US failed despite all its financial and military muscle because this adventure was conceptually flawed.

Barnett Rubin, an authority on Afghanistan from long before 9/11, had brilliantly summed up the situation in his August 2019 article in the Foreign Affairs. (Diplomacy Can’t Solve All of Afghanistan’s Problems). Rubin had argued that the US must withdraw because while it is not a perfect solution it is still better than all other options.

Agreement in Doha is a huge moral and political victory for Pakistan, its key institutions and its current Prime Minister, Imran Khan – who had always argued that war in Afghanistan was a US mistake and there is no military solution to this conflict.

US military, intelligence, strategic community, media and think tanks had demonized Pakistan for not taking decisive coercive actions against what was described as “Haqqani Network”. Pakistani institutions had always asserted that maintaining engagement with Taliban groups was a must for finding a solution and for delivering them to the US on negotiation table.

It goes without saying that Pakistani institutions played a crucial role in making possible the “Peace Agreement” signed in Doha. Without their continuous efforts, it was not going to happen. When on 20th Feb, opinion piece of Sirajuddin Haqqani – leader of the Haqqani Network – appeared in New York Times, it was obvious that Pakistan had won its case.

Question is: what lies ahead? On 29th Feb, two agreements were signed; one was at Doha and the other was in Kabul. Zalmay Khalilzad, US Special Envoy and Mullah Baradar, Taliban’s point man signed in Doha while Pakistani delegation observed – Afghan government was not part of this deal.

But at the same time, US Defence Secretary joined President Ashraf Ghani, in Kabul, in making a joint declaration – that reiterates continuous US support to Kabul regime and its assistance in the negotiations with Taliban to agree on a “Post-Settlement Afghan Islamic Government” -and this is where real challenge lies.

Both documents – signed in Doha and Kabul – overlap with each other. US forces will be reduced to 8,600 troops in 135 days of signing of the agreement, full withdrawal will be completed in 14 months and the US will withdraw from all five bases– and given fulfilling of conditions by Taliban, all US assets including special forces, air units will leave Afghanistan by the end of 14th months.

Anti-Muslim feelings bred under the RSS/BJP power politics of past 25 years have now assumed a life of their own. Even in February, BJP stoked these feelings to gain advantage, in Delhi elections, against Arvind Kejriwal’s AAM Admi party

US will work with the UN to end sanctions on Taliban personalities and prisoners will be released. US has accepted most of Taliban demands – complete withdrawal of the US forces is a huge victory for the Taliban. What the US wants in return is mostly a figure of speech; it wants Taliban to guarantee that Afghan space will not be used against the US and its allies.

This fits with the overall narrative – but in reality, there was always a limited scope of Afghanistan being used to do another 9/11 or something even remotely similar. Taliban were never an extra-territorial or pan-Islamist force. Nothing has ever suggested that they had the slightest of inclination to hurt the US outside the theatre of Afghanistan.

However, the rather mysterious presence of “ISIS” and term, “allies” may become problematic as those unhappy with the Doha Peace Agreement may find ingenuous ways to test the US resolve to leave. The risk is that Afghanistan, in the run up to complete US withdrawal, may revert to the old fault lines of pre-9/11 era when country was divided between different zones of influence.

Afghanistan: battleground between India and Pakistan?

Before the US arrival in Oct 2001, for more than a decade country was a battle ground for influence between India, Pakistan, Iran and Saudi Arabia. After 9/11, India got a relatively free hand in using Afghan soil, citizens and institutions against Pakistan. New Delhi created huge influence with Kabul establishment and used its access to destabilise Pakistan’s Baluchistan and erstwhile FATA areas.

US kept blaming Pakistan for providing “sanctuaries” to Taliban but ignored the Indian activities. India later emerged as the only country in the region that continuously opposed US withdrawal. Peace Agreement in Doha is thus a huge setback for New Delhi.

A peaceful post-settlement “Afghan Islamic Government” as being referred to in the Agreement will be unacceptable to New Delhi – because Taliban (whom Delhi sees in the image of Ahmad Shah Abdali) will have huge influence upon this hybrid set up and this means that New Delhi’s two decade long investments will fizzle out – so it’s only logical from the lens of international relations that Delhi will do whatever works to destabilise the process.

If our reading is correct, then the US is exiting under its domestic political compulsions – it will thus not be willing or motivated to spend huge energies on managing affairs after few months. Pakistan will have to engage New Delhi directly in its own way to reassure Delhi that it will respect Delhi concerns and redlines. However, this will be an uphill task.

First Delhi real needs in Afghanistan are very different than what it affords to admit. Its official position is that Afghanistan’s space can be used against it the way it was used in 1999, when an Indian plane (IC-814) was hijacked, allegedly by Harkat ul Mujahideen, and was brought to Kandahar.

But India’s real needs are to keep Pakistan under pressure (strategic squeeze) from both east and west. It’s a geo-strategic requirement from Delhi’s lens. Pakistani overtures towards New Delhi – however sincere – may not work with Modi regime. The kind of violence that emerged in Delhi, before Trump’s visit, in third week of February, was proof once again of the nature and direction of Indian politics set into motion under BJP and RSS rhetoric.

In a weeklong mayhem, at least 43 people (mostly Muslims) died and hundreds were injured. Shops, houses, mosques and schools in Muslim majority areas were attacked and burnt by BJP/RSS crowds directly incited by the BJP leaders like Kapil Mishra.

Modi and Amit Shah would certainly not have desired ugly violence and riots at the eve of Trump’s visit. But Kapil Mishra could not have been acting on its own. It looks like that BJP wanted to clear Delhi roads of the Anti-CAA protesters, before Trump’s visit, but the aggressive approach backfired.

Anti-Muslim feelings bred under the RSS/BJP power politics of past 25 years have now assumed a life of their own. Even in February, BJP stoked these feelings to gain advantage, in Delhi elections, against Arvind Kejriwal’s AAM Admi party.

Hatred against Muslims and Islam has thus become the political lifeline of Narendra Modi and BJP/RSS combo. Such a regime will find it impossible to negotiate meaningfully with Pakistan on any issue.

PM Imran Khan, in his speech, on Feb 26, as part of the “Surprise Day” celebrations expressed his disappointment that how Indian media has been producing more and more negativity – he referred to film Panipat, on Netflix, as being very biased. He might have been troubled by the historical inaccuracies of the film but much larger issues exist underneath.

Movies like Panipat (2019), Padmaavat (2017) and Kesri (2018) all are part of an aggressive Hindutva discourse. At times producers have been accused of currying favours with the ruling BJP. But there might be a bigger problem. This discourse now sells. Padmaavat, produced by Sanjay Leela Bhansali, was one of the largest box office hits; it grossed almost INR. 6 billion in its first year.

These powerful cinematographic products present Muslims as crude savages attacking cultured and often peace-loving Hindu kingdoms for lust or money. Two essential themes flow out: Muslim were crude tyrannical invaders and sophisticated Hindus were their victims. Both Padmaavat and Panipat end up with painful tragedies.

In Padmaavat, Rani (Deepika Padukone) commits “jauhar” a collective self-immolation with hundreds of Rajput women instead of letting the savage Alauddin possesses her. In Panipat, Parvati Bai (Kriti Sanon) wife of Sadashivrao Bhau, Marhatta general, dies of her shock in remembrance of her loving husband slain by soldiers of Abdali.

Gone are the days of films that united Indians like Mughal-e-Azam, produced by Shapoorji Pallonji in 1960, starring Prithviraj Kapoor, Madhubala and Dilip Kumar and Umrao Jan Ada (1981) starring Rekha, Naseeruddin Shah, Raj Babar and Farooq Sheikh. In the present India these movies will probably not be box office success.

Indian emotional appetite has moved on – along with direction of Indian political identity. Peace Agreement signed in Doha is certainly positive but what will follow in Afghanistan remains uncertain.