An exclusive talk with Tehrek e Insaf Chairman Imran Khan’s Ex wife Reham Khan at Banni Gala on 7th May, 2015 just few months after they got married. Reham khan is a media personal and was doing her own current Affairs show before getting married.

Dr Moeed Pirzada raised some important questions and controversies attached which are in at that time in media that Reham Khan will join PTI politics but she denied in the interview. She said that being dual nationality holder UK and Pakistan she is not allowed to take part in Pakistan politics but she is interested in social welfare projects that’s why she became ambassador of street children in Khyber PakhtonKha Province. Also there were scandals about her alleged fake educational degrees but she cleverly covered that during the interview. 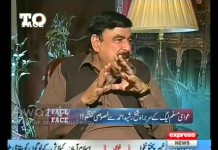