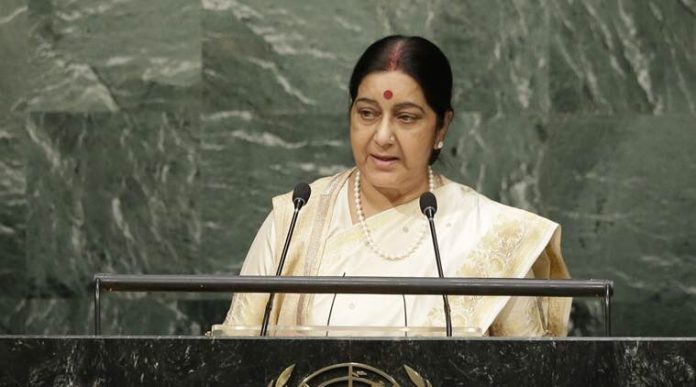 Indian Foreign Minister, Sushma Swaraj, completed her 19 – 20 minute speech at United Nations General Assembly short while ago. She spent first 9 minutes talking of the need to fight poverty, talking of the 400,000 plus toilettes which her government, Modi Sarkar, had developed across India. She then moved on to ‘Environment’, mentioning Mahatma Gandhi rekindling his memories as part of the elevated rhetoric for which India became famous in Nehru era. And finally after these ‘side shows’ she reached what every one was waiting to hear from her: Pakistan and terrorism. UN Website: Sushma Swaraj’s Speech at UNGA

She then spent the remaining 10 minutes of her speech lambasting Pakistan, its cross border terrorism in Indian controlled Kashmir, human right violations in Baluchistan, and the need for isolating Pakistan – sometimes mentioning directly and sometimes implying – as the state that is carrying out or sponsoring terrorism in the region, an issue which all member states are concerned with. While concluding, she demanded that there should be a treaty to isolate such countries that sponsor terrorism. It was obvious that the only country she and her government are obsessed with is: Pakistan, so in simple terms she made the case for ‘Pakistan’s International Isolation’. Times of India – Full Text of Sushma Swaraj’s Speech at UNGA

Not that any one is taking it seriously, or Pakistan is fearing international isolation; but moment warrants serious analysis of Indian actions. International cases and demands for action are not made in a vacuum. There has to be an overall context, a developing situation that has already focused the minds, created receptivity  and acceptance across the world, in major centers of power for a consensus to develop for taking an action. 9/11 had made the case for attack on a country, Afghanistan. Taliban’s regime had very limited international recognition – only from Pakistan, Saudi Arabia and UAE – and very bad reputation especially after their destruction of ‘Bamiyan Buddhas’ and the Al Qaeda attacks in Kenya and Tanzania that lead to hundreds of civilian deaths. Even then, still it was considered a ‘sovereign state’ but the sudden, cataclysmic nature of events of 9/11, unbelievably shocking images transfixed on television screens in every city, every home, helped create an immediate consensus for action. In contrast in 2002, despite the the hoax of Weapons of Mass Destruction, despite the wicked nature of Saddam Hussain’s absolutist dictatorial regime and the widely circulated stories of his brutality the case for action against Iraq divided world opinion. Even within the main western camp, countries like France, Germany and Canada had serious reservations. Because there was no ‘sudden cataclysmic context’. Fortunately or unfortunately, human minds need a dramatic event to focus minds.

This is an important question – for all intelligent minds, for all students of international relations, for all academics, all experts of South Asia and for the common sense of mankind. Because what transfixed the minds – from 9th July to September 18th – what filled television screens and newspaper headlines, after the death of Burhan Wani, from India to Middle East to the west were images of young unarmed Kashmiri boys and girls, battling Indian security forces, tragic images of young faces – sometimes as young as 3-4 years – punctured by pellet wounds, Hundreds Suffer Eye Injuries from Pellet Guns – Al Jazeera   images of the hundreds and thousands protesting on streets of Kashmir, images of dead bodies, of funerals, of markets shut down and news of papers, periodicals being confiscated, printing presses being shut down, statements of doctors describing the wounds of their young patients, images of Indian celebrities poke marked being distributed across the world, “India Can’t See” campaign morphs pellet wounds into celebrity faces to highlight atrocities  of Human Right organizations and even United Nations High Commission for Human Rights in Geneva demanding access. Indian government was cracking on Amnesty International in India and Indian papers, writers and columnists were talking of a political solution, of Article 370, of the need to revert to the original pact between Pundit Nehru and Sheikh Abdullah of 1952, of the need to do something. Prem Shankar Jha – With Time Running Out, Delhi Can No longer Afford to be Complacent

Indian papers were surprised by the ‘conspiracy of silence’ from Modi government. They were surprised that PM Modi is not taking any political initiative to resolve the situation in Kashmir. This was the context, which existed before the ‘Uri Attack’ of 18th Sept. This was hardly the context in which Indian Foreign Minister, would have stood up in United Nations General Assembly and talked of ‘Isolating Pakistan’ on charges of ‘terrorism’ or of an international treaty to that effect. So who did ‘Uri Attack’ to provide this context, or some immediate pretext to Modi government to take this position at United Nations General Assembly? Every one with common sense ought to ask this question?

Could it be possible that Sushma Swaraj’s positioning and demands of ‘Isolating Pakistan’ were in response to the ‘Uri Attack’? Had ‘Uri’ not happened then her position towards Pakistan and Kashmir would have been different? Makes sense, Is not it? Unfortunately this is not true either. What Sushma Swaraj said in UNGA was exactly the position Modi government was working upon for the past several weeks. Plans were being made, being perfected of unleashing a strategy of isolating Pakistan, of defining Kashmir as nothing but ‘cross border terrorism’ and blaming Pakistan for creating all what Indian government faced in Srinagar and adjacent areas. Indian papers talked of the workings of a ‘Doval Doctrine’ Hindustan Times – Modi is implementing Doval Doctrine in Kashmir  that emphasized that there is no need of showing leniency, or offering political dialogue to the Kashmiris or Pakistan; situation needs to be dealt with a sustained strong hand, till Kashmiris collapse  in helplessness and realize that they cannot face up to the power of India and Pakistan needs to be put on defensive by raising ‘Baluchistan’ on international forums like United Nations – something which Sushma Swaraj finally did in her UNGA speech.

But there is more for us to grasp the contours of the thinking that was developing for India’s international agenda at United Nations General Assembly. In the first week of September – while Kashmiri youth were bleeding on streets of Srinagar, and being disfigured by pellet shots – almost 14 days before the morning attack on “Uri”, on 4th September, Indian Prime Minister participated in G-20 summit, in the Chinese city of Hongzhou. There he also attended a meeting of the BRICS heads of the state.  And here Modi demanded that countries who sponsor terrorism should be internationally isolated. Though he did not mention Pakistan but his reference was clear. He said that a single country is responsible for it. Hindustan Times – One Single Nation spreading terror

He emphasized upon the need of some sort of international mechanism to achieve this, to isolate these countries. This was precisely what Sushma Swaraj said at the United Nations General Assembly on 26th. The only difference is that ‘Uri Attack’ had happened, which India immediately blamed on Pakistan. Question again comes to mind: Who did ‘Uri’ to fix it nicely, perfectly within a context, providing support to the Indian international agenda? The Hindu – Modi at the G-20 Summit

Was there a risk of war in South Asia? No, Never. What will follow from here? Modi may surprise everyone by landing in Pakistan for SARRC summit. Wait for my next analysis for it but if in the third week of September Indian objective was to displace media attention away from the political and humanitarian situation of ‘Kashmir’ then it has – at-least for now – succeeded. Now ‘political crisis of Kashmir’ has been replaced in Indian media and minds – that matter in the end – with the talk of ‘Indo-Paksitan tensions’ and the need to do something with a recalcitrant Pakistan: Surgical strikes, scrapping Indus Water Treaty and isolating Pakistan internationally. This may last for next several weeks – may be till the beginning of campaigns for state elections in the early part of 2017 – meanwhile Kashmir stands supplicant at the door step of Indian consciousness – asking for the real spirit of Mahatma Gandhi – not the one which BJP’s Sushma (the political progeny of the killers of Gandhi) clandestinely referred to at UNGA, but the sprit of Mahatma that had kept ‘fast unto death’ for forcing Delhi to let Pakistan have its financial share. Every man has to die – but Nathoram Godsay’s bullets immortalized Gandhi. Its the same ‘immortality’ which even BJP – political progenies of his killers – today, try to benefit from.

[Moeed Pirzada is Editor Strategic Affairs at Dunya News; he studied International Relations at Columbia University and Law at London School of Economics; he tweets at: MoeedNj]