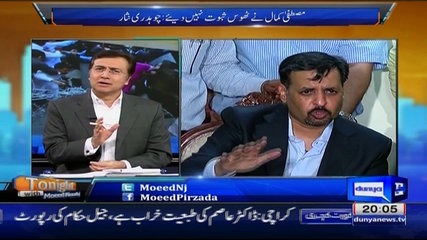 Dr Moeed Pirzada in this program segment gave analysis on Interior Minister Chaudhry Nisar Ali Khan’s Press conference in which he categorically shunned need for any judicial commission to probe Mustafa Kamal’s allegations. Interior Minister Chaudhry Nisar Ali Khan has said former Karachi mayor Syed Mustafa Kamal did not present any documentary evidence against the Muttahida Qaumi Movement (MQM) and its chief Altaf Hussain. Addressing a press conference in Islamabad on Saturday, the minister said most of the allegations levelled by Kamal were not new and he did not present any proof to support his statements.Reacting to the demands of constituting a judicial commission to probe into the former mayor’s allegations against the MQM and its supremo, Nisar said, “Every other day, there’s a press conference, should the government constitute a commission after every such news conference?” Commenting on the revelations made by Sarfraz Merchant, a trader who was accused alongside MQM chief in a money laundering case, the interior minister said the government had decided to take legal action and constituted a committee to investigate the matter as Merchant claims that he has documentary evidences against the MQM that it is receiving funds from India.