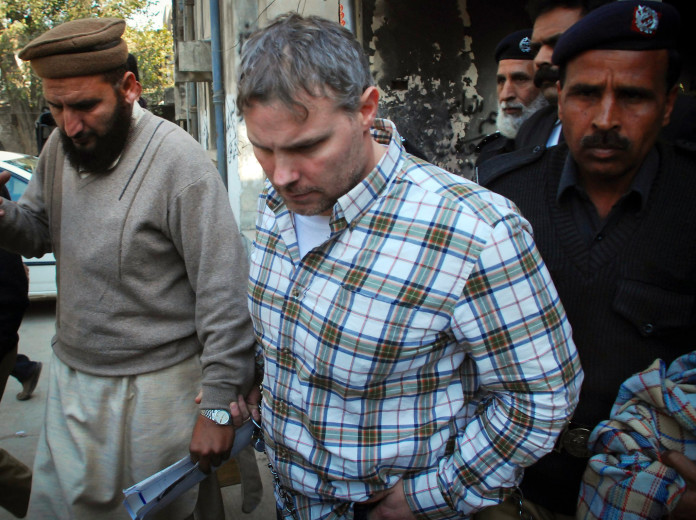 The Pakistani military establishment ought to realise that now even those Pakistanis who have been traditionally sympathetic to the military’s position are losing patience with its perceptions of ‘divine wisdom’ under which it keeps striking ‘Faustian bargains’ of one or the other kind with different actors.Historians of Pak-US relations will be forced to grapple with what can be best described as the ‘Raymond Davis affair’. The kaleidoscopic turns and twists of the seven weeks between January 27 and March 16, 2011, while this CIA contractor was in custody in Lahore, will deserve a special chapter in all historical accounts and textbooks of international law. For these events not only transformed the relations between the US and Pakistan but also exposed the fault lines between Pakistan’s elected government and its security establishment; fault lines that kept emerging and resonating throughout the 12 months that followed and finally surfaced again during the tensions of the ‘Memogate’ affair. And one year after, some awkward questions still plead for reflection from the pundits of the international community in Washington, Brussels and London.

Before the Davis affair, there was a plausible deniability on the underlying tensions that long existed between the US and Pakistani intelligence communities. But this episode brought the genie out of the bagit became apparent that inter-agency dynamics had reached a point where the ISI was actually fighting the CIA to desperately preserve its turf inside Pakistan, and perhaps used this opportunity to manoeuvre and settle its boundary issues with the CIA. Many argue that the CIA, and especially its then Italian American boss, did not take the ISI’s brinkmanship lightly and in the months that followed it, hammered the Pakistani agency to make it understand the American behemoth’s prowess and deep penetration. These sources maintain that the music and the heat the ISI faced on the eve of Osama bin Laden’s dramatic discovery in Abbottabad was part of the CIA’s revenge because otherwise the CIA and Leon Panetta knew for sure that the ISI’s ‘over-celebrated goofs’ were incompetent but not complicit. Many other developments are cited, but irrespective of the merit of these claims, the bottom line is that the Raymond Davis affair was a game changer between the intelligence agencies and it set the stage for their future relations and increasingly difficult interaction.

This episode saw: Senator John Kerry paying a high profile visit to Pakistan for trouble shooting, President Obama taking an unprecedented position to support the CIA, Secretary Clinton refusing to meet Shah Mehmood Qureshi in Bonn, and finally the Pakistani government losing its heavyweight foreign minister who was unwilling or unable to persuade the Foreign Office to extend ‘diplomatic immunity’ to Raymond Davis. Qureshi, now a leading force in Imran Khan’s PTI, constitutes a significant political threat to the incumbent government in its erstwhile strongholds of southern Punjab and Interior Sindh. So from whatever angle or perspective we view this episode, it turns out to be a significant chapter in Pak-US relations. But despite all this, the fundamental questions that were thrown up by the events were never adequately answered or taken up for consideration by either side. One year after, they still pain and puzzle all thinking minds.

First, to what extent was Pakistan’s military and intelligence complicit in permitting the CIA contractors into Pakistan and at what stage? It is true that fingers, often privately and sometimes even publicly, have been pointed towards the lax visa policy adopted by the government, under US pressure, and the role of the former ambassador to the US, Husain Haqqani, in granting such visas has been criticised repeatedly. But does that mean that such ‘armed contractors’ only started to arrive after 2009? Jeremy Scahill, a US journalist known for his path breaking book, Blackwater: The Rise of the World’s Most Powerful Mercenary Army, had claimed in a longish piece in December 2009, ‘The Secret US War in Pakistan’ in the left-leaning US publication, The Nation, that in 2006 the US and Pakistan struck a deal that authorised “Joint Special Operations Command (JSOC) to enter Pakistan to hunt Osama bin Laden with the understanding that Pakistan would deny it had given permission”. Many others, including ex-military and intelligence officials, argue that CIA contractors had started arriving, in small batches, with the understanding of the Pakistani establishment, much earlier than 2009.

So what were they doing? Were they recruiting Urdu, Punjabi and Pashto speaking sub-contractors? More importantly, what happened after the Davis affair? Over the past one year, there have been many unreliable leaks with different macho claims but there is no clarity from the Pakistani establishment or the government as to how many CIA-aligned contractors are still in Pakistan and what are they doing.

The Pakistani military establishment ought to realise that now even those Pakistanis who have been traditionally sympathetic to the military’s position are losing patience with its perceptions of ‘divine wisdom’ under which it keeps striking ‘Faustian bargains’ of one or the other kind with different actors (be it the jihadis or the US) deluding itself again and again that some ‘higher national interest’ confers it the legitimacy to set aside common sense and principles of statecraft to strike such self-destructive deals and bargains. And when these bargains go awry, then the establishment’s ‘Pied Pipers’ entice hordes of ‘political zombies’ to march on the streets to either build support for the establishment’s latest brainwave or to rescue it from its last misadventure.

Secondly, we may quickly conclude that all state organs in Pakistan suffer from degrees of irresponsibility and lack a long-term view on governance but what about the US? Under what understanding did the US administration use such armed contractors inside Pakistan? Pakistan is not a military zone for the US; Washington has never admitted any military placement or operations inside Pakistan. Key US officials repeatedly denied the presence of any ‘armed contractors’ inside Pakistan. In September 2009, the then Ambassador Anne Patterson, in my programme, ‘Dunya Today’, categorically denied the presence of any Blackwater-style contractors inside Pakistan. In the early part of 2010, while talking to anchorperson, Quatrina Hussain, Robert Gates, the then Secretary Defence, was tricked in response to one question and the anchorperson and the media claimed that Gates had admitted the presence of contractors, but it was a question of semantics and in reality he was denying it later the US embassy and his own staff were adamant that Gates never meant any such thing.

Most debates on the armed contractors have taken place in the context of Iraq and Afghanistan but these were countries occupied by the US and were active military zones and contractors were supposed to help the military in various roles and functions. In the new Status of Forces Agreement (SOFA), the Iraqi government of Nouri al-Maliki has brought the US contractors under the ambit of Iraqi law. So the logical question is: under what legal instrument or bilateral understanding US governments have allowed such contractors, who are not even regular employees of the CIA or the US government and not fully liable under the US laws, in Pakistan?

But this is also perhaps the most bizarre aspect of this situation. US Congresswoman Janice Schakowsky who had introduced the bill, ‘Stop Outsourcing the Security’, in the Congress had pointed out that on the one hand these contractors are not supposed to be part of the official chain of command but on the other hand the moment they fall in trouble the whole US system is standing on one limb repeating mantras of their immunity. This is precisely what happened in the case of Raymond Davis when for full seven weeks the US embassy in Islamabad, and all those 18 or 19 fountains of cerebral matter that deal with Pakistan in Washington, were doing nothing but trying to bail out their mercurial asset, Raymond Davis. Could an argument get more pathetic?

Finally, what is the international community’s position on granting diplomatic cover to such armed contractors, mercenaries and trained assassins under the Vienna Convention? During this embarrassing episode where the CIA contractor had killed two men and was responsible for the death of a third pedestrian, the US government adopted a twin strategy: for psy-op purposes it maintained that Raymond Davis killed in self-defence, a position that was not supported by forensic examination but legally it took a narrow cover under the Vienna Convention. Its argument was that since Pakistan’s Foreign Office had never declared Raymond Davis a persona non grata, he thus enjoyed diplomatic immunity, irrespective of whether he was formally accorded a diplomatic status or not. Though Pakistan’s Foreign Office never accepted this argument, I personally thought it was technically persuasive. But as a political analyst, I had predicted in these pages (‘Raymond Davis saga: lessons to be learnt’, Daily Times, February 8, 2011) that given what actually happened, this will never be settled inside the Vienna Convention and needs to be resolved inside the framework of bilateral relations.

One year on, I am amused that all those pundits, especially in the European Union who are never tired of lecturing us on ‘Rule-based Order’, have never taken this question up. Should the Vienna Convention be allowed to extend diplomatic cover to the Blackwater or Xe type trained assassins? Is this not stretching an international convention beyond its original scope? I can assure you, despite your insensitivity or partisan fear, this question will not go away.

The writer, a political analyst and anchorperson. He can be reached at director@media-policy.com