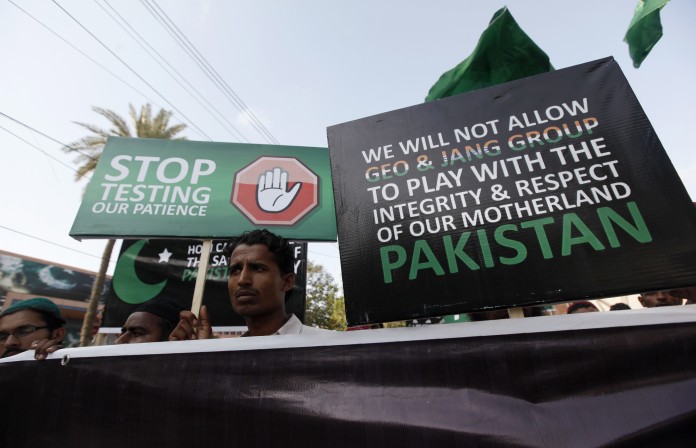 A supercharged rumour turbine is churning out speculation that the Geo & Jang Group will soon offer public apologies — through its television and newspapers — providing an appropriate finale to the two-week-old political drama that has gripped this nation of 200 million. Apparently, the owners of the media group have repeatedly offered profuse apologies in private — through the political government — but the military establishment is not ready to accept anything less than a public apology to the nation.

Sources claim that this settlement might be unpalatable to the junior officers for this in essence will set the precedent that anyone defaming the military and bringing the institution into disrepute with wilful malignant intentions will be pardoned after offering public apologies. A mere slap on the wrist would not satisfy the military which is engaged in fighting threats across different fronts. They ask: Could General Pervez Musharraf also be pardoned after offering apologies? So the question arises: why is the military establishment accepting this after taking a high moral ground?

This settlement, sources argue, is taking place in the context of the military establishment’s realisation that despite all its protestations, outbursts of anger, censure by other media and reactions emanating from streets to cyberspace, Prime Minister Nawaz Sharif stands solidly with the owners of Geo. And since the media regulator Pemra works under the information ministry, a formal legal process on the complaint sent by ISI is not expected to yield any results.

Sources within Geo & Jang and others in the government familiar with the process claim that Geo’s owners have insisted that the several hours long broadcast that happened from 7pm onwards on 19th April, with the photo of the ISI director general on screen, as an accused in a murder plot, was an editorial mistake that in no way represented a campaign or agenda against the military or the ISI. Others in the media find this hard to believe. They point out that had it been a mistake then the Geo would have offered apologies as soon it realized its blunder; it instead went on posturing and flexing muscles through its sister publications a process which continued for several days onwards.

Others argue that these attacks on the intelligence agencies and the military have now become a norm with several sections of the media. They point out to several instances in the past including the burning of Quaide-e-Azam residency by BLA in June of 2013, murders of Hammad Raza, Additional Registrar Supreme Court, and murders of the parents of Justice Javaid Iqbal, all instances where ISI was blamed for gruesome acts in kneejerk reaction by sections of media. No actions were initiated or anyone held accountable in media when facts were discovered otherwise and cases were resolved.

Looking at these divergent opinions, it becomes clear that any resolution of the current crisis without addressing the basic issues of editorial responsibility by Geo – especially in the domain of news bulletins and breaking developments – will neither bridge the wide gulf that has emerged between the political government and the military nor will it offer any guarantees against such “gross acts of misconduct” in future. Similar ugly situations will emerge again. Though many voices in media and politics have taken strong positions against Geo and its misconduct but most media persons are also convinced that closing a popular channel like Geo or cancelling its licence is no solution either.

They argue that news operations — which represents a direct decision making by the channel management and are heavily influenced by the owners — should be brought under tighter scrutiny and mechanisms should be in place to create a layer of management professionally responsible for editorial decisions independent of media bosses. This may also offer a template for wider adaptation by other news media. It remains to be seen how the government’s interlocutors find a reasonable solution that can take all sides along.

The writer is group analyst at the Express Media Group.