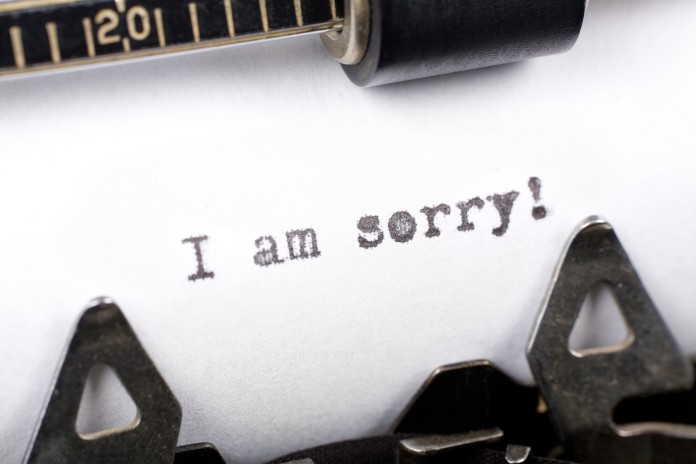 Apologies & Regrets Easy but Accepting Mistake Difficult: This afternoon I was hit by a motorist. She was waiting at a cross-section to a major road, and I, a pedestrian, was about to cross a small, 10 feet road, across the major road. She perhaps could not see because of traffic on the main road that interfered with the sight. However as soon as the traffic passed she throttled at huge speed and came and hit me, dragging and throwing me off road. It was my first ever road accident and I realized it is a matter of seconds between life and death. I fell next to a wooden bracket with lots of pointed metallic projections but none hit me. As I recovered my orientation I found myself bleeding from several points on arms and legs, due to drag on the rough road, but realized how lucky I was that despite a huge impact no serious injury.

Next I found myself looking at the Madam Irresponsible Driver, who was in panic, sorry, apologetic, who regretted all this, told me that she knows me, had even met me at some conference or something and wanted to take me to a hospital. I asked her: At what speed you were driving? this was a small residential road. Few other pedestrians who had seen all this happening reminded her that she was very fast and suddenly accelerated. Her innocent response was that I did not see her and suddenly came in front of her car. Was I committing suicide? I realized saying sorry and regrets are all easy in our culture but accepting exact mistake is difficult, even when we don’t have any liability culture. This is what I observe continuously in politics too. I just wanted her to realize that sudden acceleration may work at motorway but at inter-sections it can cause accidents, but realized that more important for me is to stop bleeding and getting injections as my wounds were all soiled by mud.

She insisted that she should take me to hospital. I thought given her driving skills and state of mind of guilt and panic, it will be safe to walk myself; I walked to Ali Medical Center. It was painful to walk but I was so happy that every limb was working and when I reached emergency for dressing and anti-tetanus I discovered a young man who was being stitched after a motorbike accident. My pain ended too.

Now lets focus on NA-246 & how stupid arguments are being advanced…not easy to accept the exact issue! South Asian Curse!