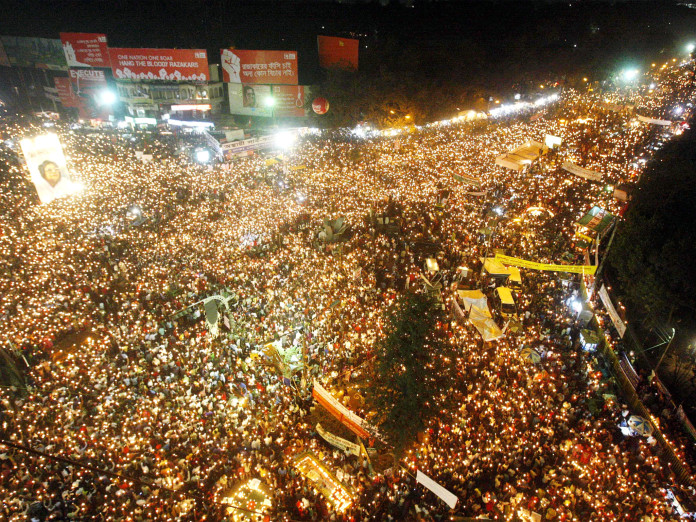 This relates to today’s program (Sat, 17th Dec) This program had a limited and defined focus on certain key aspects and questions related to the break-up of Pakistan and the creation of Bangladesh in Dec 1971. These are the kind of questions and themes which are often debated in Pakistan without making an overall sense so I only wanted to focus on them; discussing everything was not possible, therefore there is a feeling that I have not discussed this or that. So let me explain what was discussed and why?

First, this needs to be understood that the basic structure of the State of Pakistan as it existed in 1971 was essentially flawed. A poor developing world country, in two parts, seperated from each other by 1000 miles of enemy territory in between did not make any sense. This whole notion of sentiments and feelings expressed repeatedly are not enough for good statecraft; states need ‘geographical contiguity’. A rich powerful state like United States can have an appendage like Alaska but a poor West-Pakistan could not have not an “East-Pakistan” certainly not for long.

Second, this was a flawed design but was the result of a flawed partition that should not have ever happend or certainly not on the grounds it finally happened. Jinnah’s arguement for Pakistan was to win a legal arrangement within the larger context of an India. He always referred to India as the overall overarching entity, umbrella entity that contained both Hindustan and Pakistan. Pakistan in that legal arrangement was different from Hindustan only in the sense of being a collection of Muslim majority provinces or States in the East (today’s Bangladesh with Calcutta) and West (today’s Pakistan but with whole Punjab and Kashmir) but with its own Hindu, Sikh and Christian minorities. This was actually the way India was before British came and brought a new political model which started seeing Hindus and Muslims as majorities and minorites. It was this political concept against which Jinnah militated for he argued that British have placed a political system upon India which will reduce Muslims into a minority and will work against their socio-economic interests and growth. Jinnah was merely arguing for a looser confederation of Muslim majority and Hindu majority provinces inside the framework of an overarching India. In this model, if it was approved, there was no possibility or fear of the bloody migrations and killings that took place in 1947, because Jinnah never argued for the division of provinces and States. Punjab and Bengal were not to be divided.Muslims and Hindus had to live and work where they were living and working.

Third, this did not happen because Nehru and Patel (but not Ghandi and Azad) had started believing that such a looser confederation will deprive them of the powerful center which they needed in Delhi to create a bigger power. It was Nehru who argued and was able to win support of Mountbatten for the division of provinces on the basis of Hindu and Muslim Districts. This was the June 3rd Plan which was shared with Jinnah only a few weeks before the actual partition on 14th Aug, 1947. It was this partition of Punjab and Bengal that lead to migrations, and killings. And it was these killings that produced the hatred and mind set in which the states of India and Pakistan defined their relations. And it is these ‘poisonous relations’ from which we can not emerge since then; imagine if we cannot emerge above this hatred and mistrust within the virtual reality of this facebook then what are the chances that we can over come this hatred and mistrust in the real physical world that exists outside..??

Fourth, If the political formula agreed by Jinnah in the Cabinet Mission Plan of Dec 1946 had been agreed overall, and a loose confederation of Indian Provinces and States would have emerged in 1947 or 1948 then India today would have been like the European Union and it was quite possible that, without the acrimony of the migrations and killings, its various components pulling apart in 1947 would have developed deeper institutional relations, bonding and inter-dependence thus bringing them closer together in a volunatary fashion the way we see happening in Europe. Alas it did not happen that way, but bottom line is that the ‘migrations and killings of 1947’ were not part of the Pakistan plan of Jinah or its effect; these were the effect of the division of Punjab and Bengal, the concept advanced by Nehru and Mountbatten.

Fifth, Once the ill fated and ill-designed partition happened, the East Bengal/East Pakistan and now Bangladesh should then have been an autonomous entity from the beginning; if it was not, then it was only lack of political vision. Problem was that Karachi/Islamabad had inherited the power of British Raj the way it devolved upon Delhi in India and Bengal minus Calcutta was literally a weak limb to begin with in 1947. My arguement is that even after partition if the State of Pakistan had been an organic political system with a vision then with each five year plan or election the former East Pakistan would have gained more autonomy untill it was virtually free and on its own the way Australia or Canada have evolved into independent states from dominions of Great Britain.

Sixth, Emergence of East Pakistan into an independent Bengali State was thus inherent in that flawed model. Whatever happened in 1970 – 71 could have either happened earlier or later. Even if India had not instigated an insurgency, and supported it through a military intervention Bengal would have gained its autonomy from West Pakistan sooner or the later; though without much violence. The massive violence that took place was an outcome of the Indian plan. The Indian State’s narrative of an innocent India affected by the Pakistani brutalities and thus forced to intervene is essentially flawed for the reason that Indian Intelligence (RAW) was actively working to create the insurgency and the circumstances that will force Pakistani military to deal more and more harshly with the Bengali nationalists and insurgents thus setting the stage for the larger conflict that will get out of hand and will become politically unmanageable, thus setting the stage for India’s military intervention. (This is precisely how Pakistani military later frustrated Indian militatry in Kashmir and India’s own complaints of Pakistani support from across the borders should help understand the dynamics of such actions. The difference is that Pakistan, given its overall weaker position, could never afford to support the Kashmiri insurgency the way India could do in East Pakistan; this is a long discussion we should do separately).

Seventh, Sarmilla Bose is not the first one to narrate that how four or five armed groups were fighting each other in Bengal in 1971; this has always been known. Sarmilla Bose has only added the death figures through research. Pakistani military and citizens of West Pakistani origin and Bengalis aligned with the Pakistani state were being attacked by Indian supported Mukhti Bahni and other Bahnis. And Pakistani military had in turn created the militias like Al-Badar and Al Shams. Later after March 1971 the Bengali officers of Pakistani military joined the insurgents thus further increasing their fire power. In this conflict people died from all sides; it was not killing by one side of the other but was happening from all sides.

Eighth, What India gained?….India gained every thing; it was in Dec 1971 that India for the first time emerged as the clear and unquestioned dominant power of South Asia, inheritor of the Raj, relegating its principal foe (and once its own part) to a much reduced position and embarked on a journey to ask the world to accept its position in the region and beyond. However in the process it created more insecurities in the region from which we all, including Indians, suffer and keep on shouting at each other without realizing from where all this is coming from…!

Whereas given the hostility between India and Pakistan we cannot blame India for their role in 1971; they saw an opportunity and exploited it, however all of us- Indians and Pakistanis – ought to be aware of what we did or did not. Lets not be like those idiots who feel perverse happiness on 9/11 tragedy and fall of Twin Towers and then blame Americans for doing it…Indias and Pakistanis both ought to live upto their own actions in shaping a painful and difficult history from which we must emerge…with understanding of what we have done…