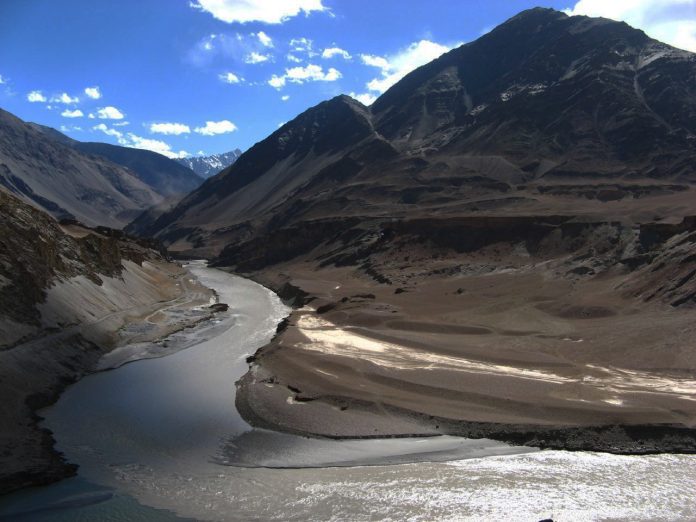 Indus Waters Treaty Will Be an “Act of War”: Sartaj Aziz

September 19, 2016 marks the 56th anniversary of the signing of the Indus Basin treaty by India and Pakistan. The agreement signified the end of a long dispute between the two countries and opened the door for increased economic development in the region. Though the treaty has survived India-Pakistan wars of 1965, 1971 and 1999, this time India is evaluating its pros and cons, indicating that the government may look at options to claim water resources without breaking the alliance.
Under this accord (Indus Basin treaty), control over the three “eastern” rivers — the Beas, Ravi and Sutlej — was given to India and the three “western” rivers — the Indus, Chenab and Jhelum — to Pakistan.
Indian PM Narenda Modi soon after urging a joint India-Pakistan war against poverty, unemployment, illiteracy and infant mortality, threatened Pakistan to use water as a weapon— A region which wholly depends on agriculture and the agrarian chain for their livelihoods.
Indian war frenzy paradigm indicates the real intention as to prolong and undermine the bone of content between Pakistan and India on the serious issue of Kashmir and Distribution of water resources. The indian strategy is to fade this matter so that after some time, the intensity will be diluted. With the passage of time, sooner or later, the incident would become another ‘historic incident’.
BJP Government and his followers must remember that Mahatma Gandhi’s birthday is on October 2; is this the way you want India to celebrate his birth anniversary? Since PM Narendra Modi was not born in 1947, let me explain something that happened in 1947. Government of India wanted to cancel due share of their money to Pakistan after partition. It was Father of Indian Nation Mahatma Gandhi who fasted to compel the Government of India to release an amount of Rs.55 Crores due to Pakistan.
Adviser to the Prime Minister on Foreign Affairs Sartaj Aziz on Tuesday addressed the Senate that revocation of the Indus Waters Treaty by India “can be taken as an act of war” against Pakistan.
He stated that there is no provision of suspension in the treaty which was mediated by the World Bank in 1960, adding that India cannot alternate or revoke the Indus Water Treaty unilaterally.
Earlier in the day, Aziz addressed the National Assembly saying that provocative statements and actions from the Indian leadership on the Indus Waters Treaty are a violation of international laws and breach of the treaty. He said unilateral revocation of the treaty can pose a threat to Pakistan and its economy. He said that if India violates the treaty Pakistan can approach the International Court of Justice.
Pakistan will ‘react befittingly’ if India attempts to violate the Indus Waters Treaty, the adviser told the NA. Pakistan will not accept any pressure from India and will continue to highlight human rights violations perpetrated by Indian forces in India-held Kashmir (IHK), Aziz said.
This was in reply to the Prime Minister Narendra Modi’s on Monday had chaired a review meeting of the 56-year-old Indus Waters Treaty during which it was decided that India will “exploit to the maximum” the waters of Pakistan-controlled rivers, including Jhelum, as per the water sharing pact. He said, “Blood and water cannot flow together.” Modi Looks at Water Treaty With Pakistan After Terror Attack.
To show how this would work in practice, the Indian government cancelled, indefinitely, the meeting of the Indus water commissioners.
Under the treaty, which was signed by late Prime Minister Jawaharlal Nehru and Pakistan President Ayub Khan in September 1960, waters of six rivers — Beas, Ravi, Sutlej, Indus, Chenab and Jhelum — were to be shared between the two countries.
Pakistan has been complaining about not receiving enough water and had gone for international arbitration in a couple of cases. The experience of the Kishanganga and Baglihar arbitrations suggests that poor policies, indecisive leadership and weak external representation have had a discernible impact on Pakistan’s ability to press for its maximum rights under the IWT.
If Mr Modi does want to wage a joint fight against poverty, Pakistan should welcome it. If he wants to threaten our country’s water resources, Pakistan should be prepared to defend itself legally and diplomatically because this matter is of life and death for Pakistan.

[Imran Khan is Program Coordinator and Researcher at Governance and Policy Advisors, Islamabad; he studied International Relations at IIUI; he tweets at: imrankhanniazai and can be reached at imran31255@hotmail.com]