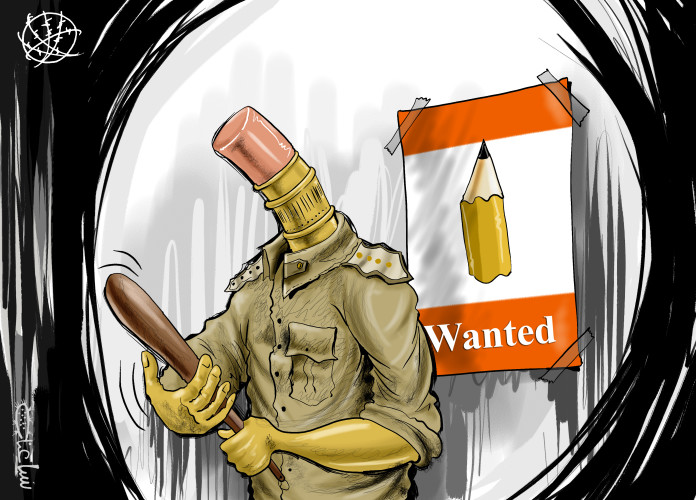 So the argument goes that we can use ‘the medium’ to send the message across to the world that we are bold enough, strong enough and determined enough to hang a killer; that we have a determinition to implement the law but we will block ‘the medium’ the same medium, we need for sending the message if it reports back to us that some sections of the society react to it, consider it unfair, are blocking roads, and unfortunately thousands have gathered to honor this killer. So now ‘News’ in Pakistan is something we like or we do but is not something that happens…?

On 4th January 2011, few minutes past 4pm, when this misguided zealot, Mumtaz Qadri, took 28 shots at the then governor of Punjab, Salman Taseer, I, Nasim Zehra and Fahd Hussain were all at Dunya News TV. If today’s logic has to be accepted then our channel should have suppressed the news, kept our mouths shut; should have denied that high and mighty Governor of Punjab has been shot dead by his own body guard; public should have sat in their living rooms or offices and suspected Taliban, Indians, NDS, CIA or his enemies in Punjab government as many in the PPP did.

But No, Fahd Hussain, the then Director News Dunya, went on air asking me and Nasim to join to analyze what happened. I was the first to suspect, to speculate that this must be the work of religious zealots; my reasoning was clear that only inconspicuous fanatic hidden in the governors’ security detail – someone not being seen as a threat – could have done it and given the personalized rhetoric against the governor over the last few weeks this must have happened. As news poured in, minute by minute, we were proved right. Given the legacy or the curse of the free media which we inherited from a so called ‘dictator’ by 4.30pm, whole Pakistan, the whole world knew that Governor of Punjab, of the largest province in Pakistan has been shot dead by his own guard, who was acting alone.

Over the next few years, while speaking to parliamentarians and officers in universities like NDU in Pakistan and while speaking to students of Georgetown and Harvard and other places I always gave the example of this tragic incident as the power of Pakistani media to report the truth, to describe what happened. I explained that in our childhood, growing under the Frankenstein unleashed by Gen. Zia and in the lives of our parents, as long as we can remember, we in this country listened to BBC, to Akashwani, to Radio Moscow, to Voice of Germany, Voice of America and all kinds of ‘voices from every where’ like schizophrenics – because we didn’t have our own voice – to know what might have happened in our own city, may be next bloc.

I remember whenever something ‘political’ was happening, in Karachi, in Lahore, in Sindh, my father, a doctor in Mirpur, least interested in politics, would switch to ‘Saer Been’ a BBC radio program, that was broadcasted from London, at 8.15 pm Pakistan time to know what is happening in his own country – and sometimes in a neighboring town. Given weak and fluctuating signals, we would move, with a radio glued to our ears, from room to room, sometimes from street to street to get a good earshot of what BBC was saying. But in the last few years, in seminar after seminar, I told students in Pakistan and across the world that we in Pakistan have broken this ‘trust deficit’ and now we can tell ourselves about ourselves and that we have kicked out BBC and CNN and VOA and off-course ‘Akashvani’; and we are proud that we are getting a bit more confident, a bit more mature and lot more sovereign — because what is ‘sovereignty’ without the ‘freedom to know thyself’.

Now over the last few months, we are increasingly returning back to our ‘primitive selves’; the hapless nation, informed by Ptv, that did not know in 1970 what Bengalis were thinking of Punjabis and rest of West Pakistanis, that did not know in 1971 that town after town has fallen to Indian forces that are advancing towards Dacca, that did not protest when in 1980’s front pages of newspapers had empty columns, or that did not know in May of 1999, that we have almost started a war with India in Kargill. The level of political discourse is crashing with such a speed – like a jet falling down after being shot – that in the last 48 hours most people failed to distinguish between ‘news’ and ‘current affair programs’. Upset, or hurt or distraught by the ‘agendas’ of some unscrupulous anchors, large sections of public are even prepared to accept ‘blackouts of news’. They have even forgotten that news is an altogether different commodity from ‘gossipy discussions’ and that ‘News’ is sacrosanct. Many activists masquerading as ‘columnists’ and ‘responsible journalists’ are part of this idiocy.

How can television channels be advised or forced not to tell the public that sizable crowds have protested in Rawalpindi, Lahore, Karachi and other parts of the country; or that roads remained blocked in different parts of different cities? How could lens be blocked from registering that these crowds are much smaller than what could have been expected if the country had not moved ahead in its thinking on these issues? How could simple physical facts happening in major towns of the country just disappear from our screens and from our consciousness?

God forbid, if we expect this logic then Pakistani tv channels should not have reported that a man existing by the name of ‘Ajmal Kasab’ belonged to Faridkot, that hundreds of people are missing in Baluchistan, in Swat and across the country; then courts will have no basis to admit petitions and take actions; then we would not known that terrorists and sectarians and insurgents of one or the other kind have struck hundreds of times in the last few years; perhaps thousands of Pakistanis just disappeared, vaporized. If this logic expands then soon all things considered bad, ugly and dangerous will disappear from ‘the news’. Since ‘news’ is about ‘happenings’ then those ‘bad things’ will not be happening. Since corruption, nepotism, kick backs, abuse of authority by government agencies are all ‘ugly things’ that bring bad name and discomfiture to the government then surely these should disappear. What about gang rapes, rapes by policemen and those connected politically, surely these unsavory things don’t sound good to our ears and may be banished as Plato once set out to banish poets and Ayub Khan ordered destruction of goat and sheep. Politicians in Sindh already complain that children have always been dying in Thar; why such fuss now?

When I was in nursery, my aunt told me that in Iran or Japan or somewhere during a tremor, earth shattered and people fell into the crevices; shocked devastated and sleepless, I asked my mother: could this happen? She replied: No! aunt is lying. Later a driver told me that babies are born from the bottom of the mothers; my mother found out and driver was sacked. Just like the Media in Pakistan – dismissed. Its embarrassing to admit that till how late in my life I kept on believing that babies are delivered by female angels in hospital, and I used to wonder: why Angels come only to hospitals?

So people of Pakistan are children. At least someone in Prime Minister’s Office, in the Ministry of Information and PEMRA is convinced that public be given as much information as it can absorb or digest. But this ‘discovery’ certainly predates the hanging of Mumtaz Qadri. The advisories being issued from PEMRA, over the last few weeks, are getting more and more ‘interesting’. I will request all colleagues in media to make copies and file them for posterity; for these ‘advisories’ built around ‘arbitrary authority’ instead of the logic of law and constitutionalism increasingly sound like the hand outs issued by Colonels in a martial law regime. Perhaps the genius of our state institutions still fails to distinguish between ‘control’ and ‘regulation’. This is why today I saw headlines that ‘PM has reduced oil prices’ So what is the regulatory authority doing?

If one wants to purposefully act naïve then one may persuade himself to believe that since hanging of Mumtaz Qadri was an unusually sensitive decision so the censorship was justified. Qadri after all was a killer but not an ordinary criminal. He was a zealot mislead by clerics and politics of the day whose actions polarized the society and his execution may add to this polarization. Why forget that Salman Taseer was PPP’s governor in Punjab, an outspoken, fiercely independent mind and spirit, someone who was not impotent of expression like governors these days are supposed to be but a hard-hitting, articulate force in himself who was appointed governor with a purpose. He was a man with a mission. And the atmosphere of hatred unleashed against him after his visit to Aasiya Bibi in jail, was not merely a work of clerics but had serious political overtones. It was in this atmosphere in which an impressionable ‘Mumtaz Qadri’ did the cruel horrendous act. Qadri believed that Taseer was doing the unthinkable; insulting the Prophet (PBUH) – something still believed by countless men and women across the country. This is how the public was deliberately misinformed. It was dirty politics. Reality as known to all those who followed the events, by the day, and as amply documented by high courts and supreme court is that Taseer never uttered anything that could be remotely construed as ‘blasphemous’; his conflict, a battle of egos, was with powerful clergy and the politicians playing mischief. TV programs and newspapers of few weeks before his tragic assassination in Jan 2011, will amply document the politicians who were inspiring hatred and contempt against him. But that is beyond the scope of this writing.

What should matter to all sane minds in media, politics and civil society is that ‘Qadri Hanging’ has been used as a successful experiment – a kind of testing waters – in ‘News Blackout’ by a government that has been sending these signals of ‘controlling airwaves’ for the past several weeks. The most interesting, rather provocative part of this irony is that those who ruthlessly exploited the platforms of free media to advance their political goals and careers between 2002 and 2008 and those who again used these platforms between 2008 and 2013 to undermine the PPP government are now using a charge sheet against media to deny public’s right of information and its ‘freedom of expression’. This is called: politics of self-interest and dictatorial mind set. Dear Media and civil society, its time to wake up and smell the coffee! Party was not in 2007; party tu ab shuri hoi hay!