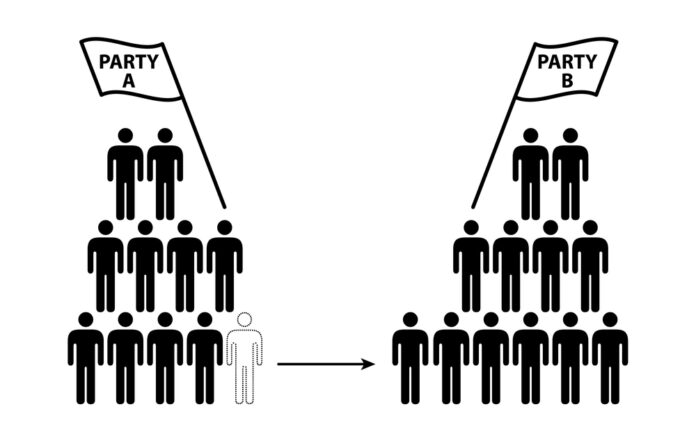 PPP and PMLN, Pakistan’s main opposition parties that intend to de-seat Prime Minister Imran Khan through a vote of no confidence are banking on PTI MNA’s elected on PTI tickets to defect PTI and vote against PM Imran Khan.

However even a cursory legal review of the constitution makes it obvious that it will not be easy, will lead to a messy legal and constitutional battle that will scar political institutions and courts and even in the end will not satisfy media and the public.

Just like Nawaz Sharif’s disqualification in July 2017 by Supreme Court for UAE work permit polarized Pakistani politics, floor-crossing if permitted by courts will lead to another wound that will make the country ungovernable.

The way things are; courts will inevitably get involved and one wonders if a Pakistani High court in 2022 will make a decision, sanctifying “floor crossing” when floor crossings in popular imagination merely represent buying and selling of votes through dirty corrupt money. Why “dirty money”? because the large amounts of cash that are used for such buying and selling represents untaxed, undocumented part of the economy.

Political grapevine and even tv discussions suggest that amounts as high as Rs. 180 to Rs. 200 million may be offered – much of that has been openly discussed in tv programs and on social media over the past few years; in certain instances, videos of such meetings also surfaced.

In the age of FATF (Financial Action Task Force) where Pakistan is stuck since March/June 2018, it is difficult to see if any serious legal expert, forum, association, or court will offer arguments to support “floor crossings”

The history of law-making on floor-crossing is interesting, reveals the dynamics and challenges of Pakistani politics and has been discussed extensively in Pakistani media – especially English papers like The Dawn, The News and The Nation and in recent years on Pakistani TV channels. The 1973 constitution, framed by Zulfiqar Ali Bhutto and his legal wizard Abdul Hafeez Pirzada, in its original form did not have an anti-defection clause.

It was the 14th amendment, introduced by Nawaz Sharif government (1997-1999) that incorporated provisions against defection into the constitution vide insertion of Article 63-A. The purpose was to “prevent instability” in relation to the “formation and functioning of the Government”

There were good reasons to use words,” prevent instability” and “formation and functioning of Government” in the language of 63-A. In the early 1990s Pakistani politics earned lasting shame when PPP and PMLN power tussles used “Murree” and “Changha Manga” as detention centers for literally imprisoning their MPAs and MNAs where police was used to keep members of parliament under lock and key before a vote.

Any member of parliament going to the toilette in the famous Changha Manga episode was accompanied by a police officer that ensured that member parliament actually went to the toilette or latrine to pee and did not meet anyone with an offer. This was an age before mobile phones and later WhatsApp changed political culture offering new avenues of political dialogue and intrigue.

However, the 14th amendment had defined ‘defection’ in a very broad sense. PMLN under Nawaz Sharif then had two third majority because of the Feb 1997 elections often referred to as the “Biggest Mandate” A parliamentarian or member of a provincial assembly elected on the ticket of a political party, under 63-A, was deemed to defect if (a) he violated party discipline, (b) voted contrary to directions of his parliamentary party, or (c) abstained from voting against party directives on any bill.

It was for the head of the political party to determine whether any of his legislators had committed defection on any of the above grounds. After his decision, the role of the Chairman, Senate or Speaker of the National or Provincial Assembly (the presiding officer) and the Chief Election Commissioner (CEC) was mainly in the nature of a post office – or ceremonial. The grounds of defection were such that a member could be shown the door most conveniently.

General Pervez Musharraf, after his coup in October 1999, needed political engineering inside parliament and purely for his own interests brought several changes to the constitution including amendment of Article 63A, through 17th Amendment. Gen. Musharraf’s new version of Article 63A diluted the grounds of defection.

However, despite this dilution, defection was deemed to have taken place on two grounds: One, when a member resigned from his political party or joined another parliamentary party; Second: member voted or abstained from voting contrary to the directions of his parliamentary party in case of election of the leader of the house, vote of confidence or no-confidence, or a money bill.

Under Gen. Musharraf’s new Art. 63-A, a member could vote contrary to the orders of the parliamentary party he belonged to on a non-money bill or a constitutional amendment bill without invoking the defection clause. This was what Musharraf then needed for his political engineering – and running the show.

In order to weaken the hold of political party heads, under the 17th amendment, the reference sent by the head of a parliamentary party regarding the defection of his member to the Election Commission through the presiding officer concerned was not binding on the Election Commission which could reject it or confirm it within thirty days.

The decision of the EC could be challenged in the Supreme Court, which would decide the matter within three months. However, it is important to note that emphasis in 63-A on “Vote of Confidence” and Money Bill remain unchanged. Later 18th Amendment in 2009/10 again brought changes and strengthened the hold of political party heads.

Will any court afford justifying floor crossings in a FATF troubled Pakistan?

“Vote of No Confidence” against a party head. No Prime Minister has ever been de-seated through a vote of confidence.

Now PPP and PMLN are trying to interpret 63-A to mean that PTI defectors can vote against the PM and can only be declared defectors and thus disqualified through a long-drawn process after they have voted. This clearly defeats the intent and purpose of 63-1A, because if in the presence of 63-1A such votes of defecting members are allowed, and a government falls then their subsequent defection is meaningless.

Any legal process afterwards will be a cosmetic exercise in futility to fool the public, will reward the defectors and those who buy their loyalties, offers no protection against future floor crossings and will bring Pakistani politics back to the age of “Changa Manga” when governments needed to use police officers to detain and control their parliamentary members. 63-A was introduced in 1997, by Nawaz Sharif, precisely to prevent the political instability he now wants to create. This is the irony, and this defines the crisis of Pakistani politics.

The only functional interpretation of 63-A, that can serve the long-term interests of Pakistani politics and democracy, is that any member who clearly demonstrates his intention to vote against clear instructions of his party headstands disqualified with immediate effect and any vote he casts is “invalid” and “void ab initio” – in simple words such a vote has no legal value and cannot be counted.

Process of disqualification can then follow. Any attempted digression from this interpretation means to reward and encourage floor crossings -and political instability. And when one keeps in mind that irrespective of legal discussions of proof and evidence inside courts, almost 99.99% of the public believes that floor crossings represent huge exchanges of dirty money.

Dirty money that remains undocumented, untaxed and represents money laundering. Given Pakistan’s ongoing troubles with FATF, this is not a trend that needs encouraging from any serious quarter. Test of any law or legal document lies in its implementation; any law is meaningless if it fails to create a deterrence against the crime it is supposed to prevent or stop. One hopes sanity will prevail in Pakistan’s best interests.