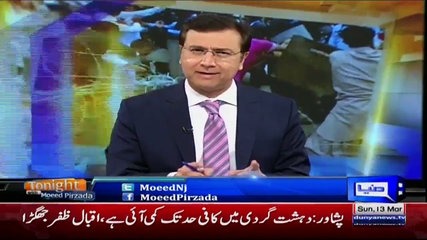 Dr Moeed Pirzada with Mohammad Tahir who is a investigative journalist critically discussed the Ashura blast in a mourning procession on December 28, 2009 and series of violent events started after this blast. On 3rd June, 2010 Dr. Moeed Pirzada along with Mohammad Tahir discussed the implications of this blast in program “Dunya today”. After six years and two months Faisal Mama, Ranchorr Line’s sector member of a political party revealed to the JIT that Hammad Siddiqui had the principal role in Ashura blast. Siddiqui chaired a meeting for the purpose at a political office, he added. Mama revealed, “Junaid planted the bomb in a box for the sacred pages of Quranic verses fixed to a power pylon. Habib Langra blew up the explosives with a new sim and fled away.”.