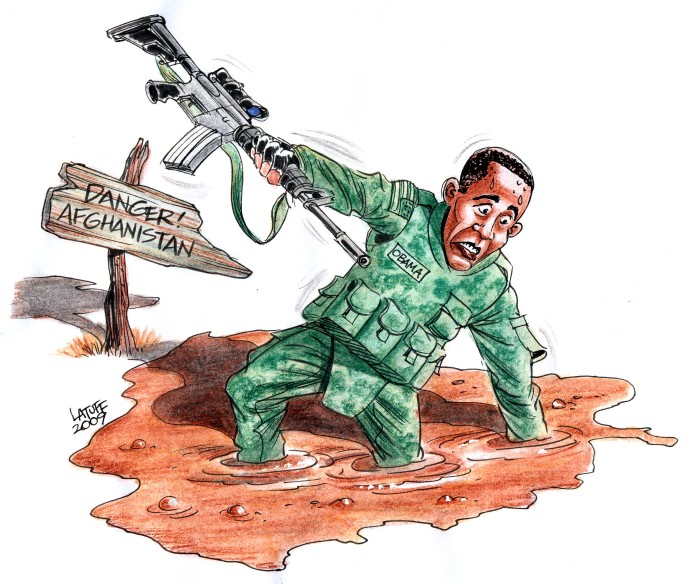 Grappling with the puzzle

What will happen in Afghanistan once the US and allies withdraw the bulk of their forces? Will Afghan Security Forces hold and for how long? Will Taliban overrun the periphery? Will Kabul be under-siege? For how long the US Congress will be willing to cough up $18-20 billion a year for a war in a remote forgotten part of the world? And how whatever happens in Afghanistan will it affect its neighbours?

What will neighbors then do to use the new space and power vacuum to interfere across borders, to squeeze each other or to prevent their interests and affiliates? How that competitive paranoid relationship, affect Afghanistan, its politics and society in turn? And how this chaos will affect the US interests in the region? These questions were being asked for the past several years but now more and more people, experts, publications and institutions are getting involved to grapple with this puzzle.

The Council on Foreign Relations is blue planet’s foremost think tank and Foreign Affairs is its prestigious and most sought after publication. If one searches the term Afghanistan on its website, several dozen pieces spring up in few seconds.

This is natural given the presence of US and international forces in the region since 9/11. Such essays and articles could be diverse, dealing with a huge variety of issues from corruption to drug trade to human rights. However ever since President Obama has announced complete withdrawal by end 2014, such analytical pieces have increasingly shared one theme in common and that is: what will happen to Afghanistan and the region around it once the US power withdraws? One such piece, Ending the War in Afghanistan appeared in the issue of Sept/Oct 2013; it was written by Prof Stephen Biddle who teaches at the George Washington University.

Biddle argued that basically the US is now only left with two options: One, is to spend political capital at the Hill to engage Taliban in open ended negotiations with a view to achieve a settlement that can bring Taliban in a power sharing arrangement in Kabul. Second, to prepare itself for what Kissinger had calculated as a decent interval in Vietnam, before the set-up Washington leaves in Kabul collapses under the weight of insurgency and its own incompetence, this is what Biddle referred to as final defeat.

In this respect ironically, Biddle writing from George Washington University at the edge of Potomac and Gen. Hameed Gul, Ex DG ISI and now convener of Difa-e-Pakistan Council (DFC) are perhaps on the same page except that Biddle had argued this in 2013 and Gen. Gul has been saying this for the past several years.

But increasingly this debate is not restricted to the pages of Foreign Affairs or Foreign Policy or the likes of Prof Biddle and Gen. Hameed Gul. Now this question: what will happen in Afghanistan and how it may affect the region around is on many institutional minds. The Istanbul Process of which many have casually heard without much thought is one such example of a growing collective thinking.

This ministerial engagement between countries of South and Central Asia and Middle East supported by the US and twenty other countries had been trying to grapple with this question since Nov 2011. The third such ministerial referred to as Heart of Asia Ministerial Conference took place in Almaty, Kazakhstan in April of 2013. A joint declaration at the outset of this impressive congregation that also saw delegates from Saudi Arabia and the UAE = affirmed a regional interdependence.

The Joint Declaration argued that the region plays a vital role in ensuring a stable peaceful and prosperous Afghanistan, while long term stability and prosperity in the region in turn requires peace and stability in Afghanistan. It then argued that our shared interests are best served by cooperation rather than by competition. The next ministerial will take place in China this year.

But running parallel to the Istanbul Process has been another kind of institutional vision a Track-II engagement created by Friedrich Ebert Stiftung (FES), the leading German think tank affiliated with the Social Democrats in Germany. The FES created a process of engagement between the policy makers, officials and intellectuals of the region; this took the form of four key Policy Groups (Afghanistan, Pakistan, India and Central Asia) taking shape in the mid-2012.

These policy groups worked on creating dialogue at three levels: One, internal or national within their countries; second, regional with each other and third with experts in Iran, Russia and China.

Bilateral meetings between these policy groups and draft of policy papers led to inter-regional summit in Dubai in Nov 2012. Throughout 2013 meetings took place in several parts of the world including Tehran, Beijing and Berlin. In Tehran the FES delegation shared its policy papers with the Institute of Political and International Studies (IPIS) and in Beijing, the Afghan and Indian Policy Groups briefed Chinese Institute for Contemporary International Relations (CICIR) and China Institute of International Studies (CIIS) and other leading Chinese experts at Renmin University.

Series of meetings followed between all groups including the Indian and Pakistani Policy Groups in Dubai leading to a second meeting of Conveners, Facilitators and Experts in Berlin. During this meeting the overview of a Joint Declaration was presented and feedback was given by regional conveners and experts. Finally after a second meeting between the Indian and Pakistan Policy Groups in Dubai in late October of 2013 the final declaration was vetted and agreed upon by all.

Just like the Istanbul Process with which it has many intellectual overlaps but perhaps in a more pronounced fashion, the FES Joint Declaration on regional peace and stability admits that neighbouring countries around Afghanistan may have conflicting interests in Afghanistan; and what is needed is to replace the competitive model that has defined their relationships historically with a cooperative framework for future.

The goal is to turn Afghanistan into an asset for all in its period of transformation from 2014 till 2023. What distinguishes FES Joint Declaration from the Declaration of Istanbul Process is its recommendation of a Security-bound Neutrality framework to draw upon the Swiss, Austrian and other models and then developing mechanisms to protect that neutrality framework not only through the crosscutting regional mechanisms but also through the United Nations Security Council on behalf of the international community with enforcement mechanisms.

This FES Joint Declaration had a national launch in Kabul, followed by a presentation in Istanbul in end 2013. It will now be presented to Pakistan’s Foreign Office in the second week of Jan 2014 in Islamabad in an event attended by all the regional Policy Groups and by large number of foreign policy and security experts, development bodies, civil society organizations and Pakistani and international media based in the capital city. This will be followed by a seminar with presentations and question answers.

This will be an opportunity not only to learn from the regional narrative but also to critically examine the assumptions it is built upon. Like the Istanbul Process, the FES Joint Declaration keeps on referring to mutual interest, trade, energy sharing but terms like conflict, work of High Peace Council (HPC) and legitimate opposition, appear without a hint of the dreaded T’ word, but many Pakistanis especially from media will wonder: how do we understand or define legitimate and illegitimate opposition in a country under foreign occupation?

Biddle, writing from George Washington University was more honest in admitting to the presence of Taliban when he admonishes that basically the US has no real option but to engage Taliban in a meaningful dialogue, spend political capital in the Congress to make it permissible and find a sustainable power sharing settlement in Kabul. If experts engaged in conceptualizing a regional framework and that too backed by the UN enforcement mechanisms can ignore the destabilizing aspect of un-reconciled Taliban which intellectually unites a Professor in Washington with a General in Pindi then something has been missed in the Joint Declarations. The conference in Islamabad may be an opportunity to debate some of these issue.