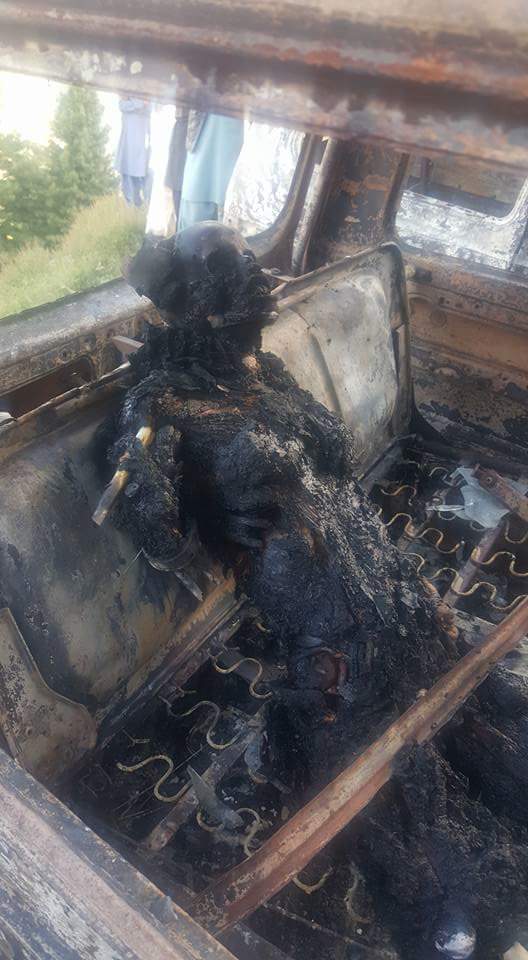 When Khurram Rashid, District Police Officer (DPO) of Abottabad, was descending down the winding hilly pathway towards the ill-fated village of ‘Maqool Payin’ located few kilometers off Donga Gali, he had a sick feeling in his stomach. It looked so beautiful and so serene with calm sheets of green spread all around him, yet it felt horrible. ‘I don’t know why? but may be it was the sense of tragedy that occupied my mind’; he told me.

It took him almost 40-45 minutes of walking down, and down the twisted pathways before he reached the collection of 600-700 poorly constructed houses, at the very bottom of a cup shaped area, spreading up and down the small hills, that defines the village of ‘Maqool Payin’ anonymous, unknown and hidden from the world till its councillor, Pervaiz, reported to Police, on 30th April that a young girl had been found mysteriously burnt, with hands tied, in the back seat of a Suzuki carry van at a local bus stand. Suzuki vans serve as public transport for the village, that lies some distance off the main highway that connects Abottabad with Donga Gali and all that area that is known in rest of Pakistan as ‘Galiat’.

A helpless figure of charred flesh, hands tied on the back, unmistakably the body of a young woman was soon identified to be that of 16 year old Ambareen, referred to as Amber in earlier reports. She dropped off from the local school after finishing 9th grade, her father, Riasat, is a poor laborer in Gadani (not far off from Karachi) struggling to feed the family. Her mother is now in jail, apparently on allegations of being an accomplice. Though Khurram Rashid while talking to Ayesha Khan, Dunya’s correspondent, defined Amber’s mother as a ‘helpless woman’ who could do nothing to defy the will of what has been defined as a ‘local jirga’

But was that really a ‘jirga’? A jirga is a traditional assembly of elders, in Pashtun culture, that meets, with representation of local community, assisted with religious figures, to reach consensus to avoid wider conflict amongst tribes or within that community. It has been claimed that ‘Jirga’ follows principles of Islam to reach conclusion but it may have predated the advent of Islam in the ancient areas of Bactria or Aryana now called Afghanistan. Most parts of KPK were not long ago Afghanistan; lost to the Sikh empire of Maharaja Rangit Singh and inherited by the British. So many parts of Pakistan, even beyond tribal areas, beyond KPK, still have the tradition of Jirgas.

But the ‘local assembly’ that announced the verdict that ‘Amber’ be drugged, strangulated and burnt in the same Suzuki carriage van in which her friend ‘Saima’ had escaped with her lover ‘Musa’ was not a Jirga. Neither this ‘hindko’ and ‘pahari’ speaking community Pashtoon in culture nor this savagery had anything to do with Islam or religion. It is not about mosque and madrassa either. This was merely an assembly of 15 strongmen, 15 local despots, 15 local enforcers who had thrust themselves on the village for quiet sometime. Village consists of three biradaris: Karlals, Abbassis and Awans. Both friends – Saima and Amber- belonged to ‘Karlal clan’ with one big difference: Saima was rich, Amber was poor.   There is another difference now: Saima is safe and Amber dead; Saima’s poor, weak dispossessed friend now shames Pakistan and haunts the world with the image of a charred female figure, mummified, breasts protruding, hands tied at the back.

Ayesha Khan, Dunya News reporter, who travelled from Islamabad to investigate with a team of cameraman and reporters in a Suzuki carriage Van similar to the one in which Amber was burnt had almost spent two days in and around ‘Maqool Payin’ when I was able to reach her on phone past midnight, in the early hours of 6th May. She had just left the office of DPO, Khurram Rashid – who brilliantly investigated and dug out the truth buried in the stink of Amber’s charred flesh, buried behind smiles of councillor Pervaiz, buried behind looks of surprise and horror on the faces of villagers who all knew what happened, but posed as if they knew nothing.

Ayesha, who loves beating dusty roads, and who once joined me in my program from Muzzafargarh, reporting on an another grisly tragedy, against another young woman, found village, ‘Maqool Payin’ steeped in a time warp. As her team parked their Suzuki Carriage Van on the road overlooking the village, and as she descended down the winding pathways, used by Khurram Rashid, four days earlier, she could feel the disconnect, the mental isolation of a people, of a community living below the hills, below the world, below 21st century, below 20th century, below Pakistan, down, deep down the winding alleys unaffected by time, determined to preserve their values, their way of life. ‘Everyone knew what had happened, why it happened and who has done it, but all posed innocent, unaware’ She told me. But the look of horror on the faces of girls as young as eight or nine reflected the fate that awaits them.

Saima’s father was amongst the strongmen, who kept assembling at the house of local councillor, Pervaiz for three days before reaching the conclusion that their anger, their hurt feelings can only be satisfied by making a horrible example of the poor girl, Amber, who assisted Saima in her elopement or who knew Saima was escaping with Musa, but let it happen. In these three days, they were able to trace, Naseer, the Suzuki Van Driver in whose van Amber and Musa had escaped. Naseer disclosed Amber’s role and Amber confessed her crime: she had helped Saima to escape. Though Pervaiz is a PMLN councillor, but his political affiliation – and those of the others, his partners in crime – has nothing to do with the horrible act they perpetrated. This was not about PMLN, or KPK, or national politics of the day. It was about their ‘primitiveness’. What they did was revenge: pure and simple. It was apparently a revenge of their dishonor, their shame; it was also the revenge of strong exacted upon the weakest link: Amber, daughter of the poor laborer, Riasat in Gadani.

But does it make it an honor killing? Samurai in medieval Japan who committed ‘hara-kiri’ more formally, ‘Seppuku’, in accordance with ‘bushido’ – the Samurai code of conduct, did it with their own bodies and spirits. Sudden disembowelment, sudden splitting open of the stomach, with a short sword, was to let the spirit escape giving back Samurai his honor. Sometimes an assistant, a second player, would deliver a swift decapitation with a trick that head of the Samurai would fall forward as if being carried in his own arms – as a sacrifice. But Samurai honor was never restored by killing his daughter or the daughter of another poor man. What happened in ‘Maqool Payin’ near Donga Gali, close to Abottabad, on 29th of April 2016 is not an honor killing; this was revenge. When Cane, the biblical farmer, killed his brother, Abel the shepherd, whose offering was accepted by God; it was an act of jealousy; Cane killed not to restore his honor but to avenge his anger.

Councillor, Pervaiz, who first informed the SHO, Donga Gali, of the mysterious charred body of a young woman tried to mislead the Police. Being the politico, he loved moving around the uniformed men of the state. It enhanced his image and power. This is what local politics is all about. But KPK police is changing; DPO Khurram Rashid, of 32nd Commons, was suspicious of Councillor’s abundant smiles and his overbearing cooperation and his offers of lunches and tea. Suspicions turned into reality when Khurram’s police units resorted to siphoning ‘Call Data Records’ (CDR) of more than two hundred calls in and around the village on the night of 29th. And they found one strange call, at 1.26am, on the night of 29th April. Why was it strange? I asked. ‘Someone using a cell phone, at 1.26am, in this isolated, dark, sleepy part of the world was unusual’. This was a call made by Saima’s father, part of the 15 member gang of killers. And that call, and police queries that it initiated soon unravelled the mystery.

Once the ’15 member gang’ the unholy jury, that reminds you of ‘Salem Witch Trials’ or Hollywood’s horror movies, pronounced its verdict, Amber was snatched from her mother past 1am. Verdict of death was announced upon the terrified mother and her hapless daughter. Amber was dragged to a forlorn house, then drugged with a cocktail of over the counter medicines – that involved things as innocent as ‘paracetamol’ – sleepy Amber was strangulated with her ‘dubatta’, tied at the back seat of the same Suzuki carry Van in which Naseer had taken Saima and Musa, eloping love birds, to their safety, and set to fire with fuels sprayed over her. She was made to sit on the ‘gas cylinder’ of the Suzuki so that it will burst and all evidence will disappear. Irony is that something as heinously pure as ‘Honor Killing’ was to be done in a dishonest fashion that looks like an accident. All criminals and crooks keep ‘Pakistani law of Evidence’ in mind, as they plan and execute their agendas. Somethings are common from top to the bottom. But unfortunately for the ‘Gang of 15’ (sorry! not the Jirga) police has  collected all the evidence – the fuels, the drugs, the ropes and all others including the CDR – and all of them – the Gang of 15 – are set to be presented to an Anti-terror court.

[Written by Moeed Pirzada, Editor Strategic Affairs, Dunya News, with input from Ayesha Khan who travelled from Islamabad and Shaukat Salar who covered this from Abottabad]