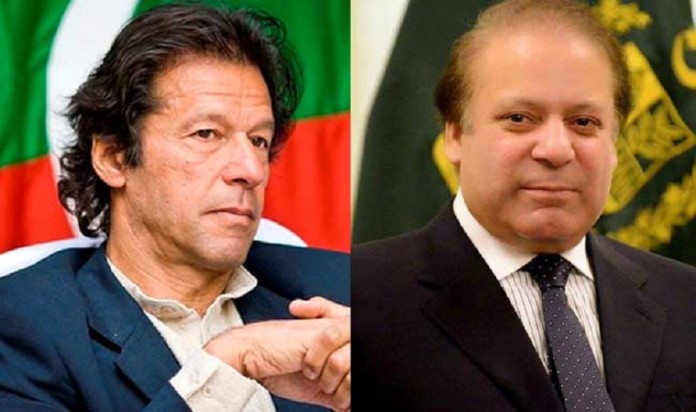 Why Imran & PTI should compromise on Resignation of PM Nawaz in lieu of a genuinely empowered Judicial Commission backed by a Joint Investigation Team with ISI & MI as components?

Because the real progress in Pakistani democratic history will take place when a genuinely powerful Judicial Commission will be able to investigate the rigging, deliberate wrong doings and executive and policy failures that marred the Election 2013 which without any doubt has been the most controversial and hotly disputed election since 1977. An Election that has jeopardized the future of democracy in Pakistan.

If you are watching the debate on tv screens, you will realize that all parties and their “hired guns” afraid of a genuine free fair and transparent election under a reformed restructured Election Commission are trying to sabotage the whole concept of the Judicial Commission. All kinds of funny and ridiculous excuses are being given for instance that this will be involvement of Army into politics. Surprisingly none of these johnnies protested when PMLN invited military under Art: 245 into Islamabad under the phony excuse of terrorism; then PM forced Army Chief to mediate into a political confrontation and sent ISI and MI officers to sit in negotiations. Now these “hired guns” are crying for using Election Tribunals. In our recent programs we were able to highlight that why Election Tribunals are meaningless to investigate the kind of systematic rigging that was done in Elections 2013. Following are some key points:

One, the Election Tribunals worked like Session Courts on the Pakistani convention of Adversarial Trials where both sides (who challenge each other) have to bring accusations and then evidence to back it up. Tribunals then got caught in technical matters as pointed out by the lawyer that most petitions were thrown out for not meeting the requirements of Sec 55(3) of the Representation of Public Act 1976 (ROPA) leading to a situation where facts are never investigated since every step of the work of the Tribunals gets stuck into Technical and procedural issues. This brings us to the first important point that Judicial Commission under Supreme Court should be fully empowered to act as an Inquisitorial Court like the French and Swiss Model where Judges can ask all kinds of questions, frame queries and then direct the Executive/Investigative Agencies to collect facts, all kind of facts and evidence to help the court understand the situation.

Second, this analysis itself helps understand that why Judicial Commission will be meaningless without the support of a powerful “Joint Investigative Team” consisting of Police, IB, ISI and MI. The last two agencies are the only two agencies who have real capacity of collecting and processing all kinds of information and are not under the control of any provincial party that fought elections.

Third, the single most important step which the Judicial Commission has to take is to order the Election Commission of Pakistan to place all Form-14’s (Statements of Count) around 70,000 in case of National Assembly Elections on its website. Why website? because Election Monitors, Political Parties and Media who are in possession of the thousands of such Form-14’s issued on 11th May 2013 can then compare and check if the Form-14’s ECP used to compile election results match with the Form-14’s being issued by the Presiding Officers in the evening of 11th May 2013. This comparison alone will furnish massive evidence to raise questions about the workings and transparency of the Election 2013. In case of differences Judicial Commission can order verification of ‘thumb impressions’ of Presiding Officers on Form-14’s. Specimens of thumb impressions of the Presiding Officers officially designated by ECP to work on 11th May 2013 are available in NADRA and AGPR. These two steps will answer most of the questions; opening way for larger investigation of why Election 2013 went horribly wrong.

Fourth, the deal between Nawaz Govt and PTI should be that govt agrees to create such a powerful independent Inquisitorial Commission supported by a JIT with ISI and MI technical support and PTI agrees to withdraw the demand of the resignation of PM Nawaz Sharif even on the conclusion of such investigations. Sword of resignation dangling on head of Prime Minister & PMLN makes it practically impossible to clear the way for political transition towards a transparent, fair next Elections in 2015.

Instead Judicial Commission should focus on finding the nature of rigging and irregularities, should suggest ways and means to improve the system, recommend the structure of a new reformed Election Commission which should be empowered on the pattern of the Indian Election Commission that takes over administration before the Election doing away the drama of this fake Interim Govt which in Pakistan is only used to do rigging under the excuse that we were not running the government and poor Najam Sethi was the Chief Minister of Punjab and so on. For all practical purposes PMLN was running Punjab, PPP interior Sindh and MQM Karachi before the May Elections in 2013 and all managed to collect as many votes as they needed.

Judicial Commission can’nt and should not recommend the resignation of PM Nawaz Sharif and Imran Khan should compromise on this demand in lieu for getting a genuinely empowered Commission backed by JIT supported by MI and ISI.

Commission once it finds the rigging and irregularities and their scope may recommend an “Early Elections” either in the beginning of 2015 or end of 2015; and political parties can settle amongst themselves the addition of opposition like PTI and PPP into central and provincial governments (Cabinets) to increase transparency before the these elections. But the single most important step at that stage will be the creation of a new Election Commission in which process should be more important than personalities.

This whole debate about who will head the Election Commission is meaningless, [an energetic civil servant in his fifties should head it instead of octogenarian judges] what is important is the internal balance of power between its various organs and total transparency so that all political parties, media, election monitors and civil society organizations can continuously examine what is happening inside the Election Commission. Multan Bye-Elections is a good example of how massive rigging becomes impossible when media and monitors are watching each step and bureaucracies are less inclined to help politicians rig the election.