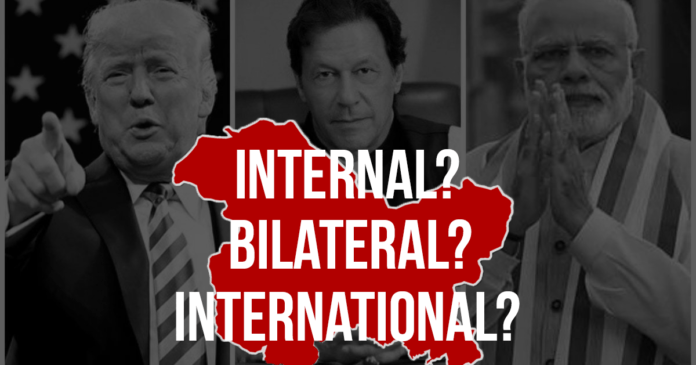 Comments of Narendra Modi, Indian Prime Minister, on Kashmir, during his meeting with US President, Donald Trump, at Biarritz, France, describing it as a “bilateral issue” have exposed the confusion that prevails in New Delhi on its stand on Kashmir.

Narendra Modi met US President Donald Trump, on Monday 26 Aug, during the G7 summit in Biarritz, France. Though India is not a member of G-7, but Indian Ministry of External Affairs (MEA) had worked hard to extract an invitation for Modi so that he can be seen rubbing shoulders with global elite. In view of the negative media attention on abrogation of Art. 370 and 35-A, it was a useful opportunity to show to Indian media and public that all is well on international stage.

As expected by Pakistani and international media, and political commentators, like Michael Kugelman of Wilson Center, Kashmir was one of the key topics of discussion.

Challenge for the Indian team, during the meeting with Trump, was to reject any offers of mediation from the US president. But the way Indian Prime Minister managed it exposed the chaos and confusion in Indian ranks and raised more questions. Its getting obvious that right-wing BJP government had not fully thought through the complexity of Kashmir issue before abrogating Art. 370 and 35-A.

A visibly stressed Modi, with his shoulders slouching forward, flanked by his team including National Security Advisor Ajit Doval said that, “all issues between India and Pakistan were bilateral” He was responding to a question on Kashmir. He went on explaining his earlier telephonic talks with Pakistani Prime Minister, Imran Khan in which he had told him that both countries need to talk as they face similar problems of poverty and hunger.

Modi, who while setting a stage for genocide in Kashmir, on Aug 5, had called it “India’s internal matter” was now saying in the context of Kashmir that its a bilateral matter between Pakistan and India and he did not want to pain any external party, a third country, with the inconvenience of becoming involved in finding a solution. He did not stop there but went on to say that “Pakistan and India were a single country before 1947, so we can settle issues between ourselves”.

Aided by a translator, US president Trump glanced at Modi with mild interest, looking amused, as he said all this. He later added that “PM Modi says that he has the situation in Kashmir under control.”

Modi was immediately described by Indian media as achieving a huge victory. Such was the level of fear on the issue of Trump offering mediation on Kashmir that even Trump’s cynical joke on Modi, “he speaks English very well” and a brief laughter between the two leaders was described as “body chemistry”. In reality, Trump was commenting on Modi’s fluctuating use of languages during the press talk – and Modi was struggling to hide his stress.

When first question was asked on Kashmir, Modi answered a parroted response in English, however when someone asked a second question, on Kashmir and possible mediation, a visibly nervous Modi switched to Urdu/Hindi. It was then that he again reaffirmed in the context of Kashmir, that “all issues between India and Pakistan are bilateral”

However, when the Modi led Bharatiya Janata Party (BJP) Government ended Kashmir’s special status by abrogated Article 370 and 35-A of the Indian constitution on August 5, the government insisted that it was India’s internal matter. The same claim was repeated in Modi’s radio speech broadcast two days later. The position was also maintained by all major news outlets. Even the Indian opposition seems to think the same way. In fact, this is some sort of “patriotism test” because anyone in India that say’s that Kashmir is disputed territory can find himself in danger.

India’s fascist Hindutva government’s position has been brilliantly  summed up an American microblogger, Richard Harris. According to Harris, India is telling the western world that Kashmir is a bilateral issue, to Pakistan it asserts that Kashmir is an internal issue and to Kashmiris who want to know their fate; its say’s; “Fuck You”

Notwithstanding Indian state machinery’s insistence that it is an internal matter, the fact is that there are more than a dozen United Nations Security Council resolutions on Kashmir that effectively make it an international dispute with Pakistan and India as key parties. This was comprehensively explained in an article, “India’s New lawfare on Kashmir and Pakistan’s strategic options” for Global Village Space magazine’s August 2019 issue by Hassan Aslam Shad, an international law expert.

As explained by Hassan Aslam Shad, the resolutions from 1947-8 onwards make it clear that no party could unilaterally change the status of Kashmir as a disputed territory.

After Pakistan’s defeat in 1971 war in what was formerly East Pakistan and is now Bangladesh, India has exclusively relied on Simla Agreement of 1972 to call Kashmir a bilateral matter instead of an international one. The agreement was signed at a time when India had taken more than 90,000 Pakistani soldiers and civilians serving in former East Pakistan as prisoners of war. The agreement was signed with India in a much stronger position with a weaker defeated Pakistan that needed to get its prisoners released.

However, even the Simla agreement, of 1972, says that all bilateral matters must be settled in accordance with the UN Charter and UNSC resolutions.

The Simla Agreement says:
“In order to achieve this objective, the Government of India and the Government of Pakistan have agreed as follows:-
– That the principles and purposes of the Charter of the United Nations shall govern the relations between the two
countries;”

After the 5th August decision by Modi’s right wing fanatical Hindu supremacist government, UN Secretary General Antonio Guterres took a clear position that his office continues to look at the J&K dispute through the lens of the UN Charter.

Since the Indian government’s unilateral action on occupied Kashmir, the US State Department has also said that their position on Jammu and Kashmir has not changed and the conflict must be resolved bilaterally. After the special meeting of the UN Security Council on Kashmir on 9th August, both Russia and China have maintained a similar position. The leaders of France and UAE have impressed upon PM Modi when they met that the issue must be resolved bilaterally.

Its getting obvious that Modi’s RSS controlled government had not thought through the complexity of issues. To them ending special status of Kashmir was an ideological commitment that had to be delivered. BJP is a progeny of Bharatiya Jana Sangh founded by Syama Prasad Mukherjee in 1951. And ending Kashmir’s special status was part of its founding manifesto. It was a religious and ideological commitment, a long standing election promise. There were no real functional or utilitarian reasons for this latest act of aggression against Kashmiris.

Since 2011, the insurgency had gone down. Pakistan under pressure of the US and western countries had gradually reined in pro-Kashmiri groups. Zardari and Nawaz governments, from 2008 till 2018, were afraid of raising the issue of Kashmir, lest it will anger New Delhi and earn them wrath of Washington. With a robust dialogue New Delhi could have pacified the situation in Kashmir. Most in Pakistan believed that Delhi will do so, however Modi government after coming to power in 2014 refused offering any political dialogue. It went on destabilising the Jammu & Kashmir government. It was a not without a forward-thinking that elections were not held in Jammu & Kashmir in 2019. When Modi took the unthinkable step of abrogating Art. 370 and 35-A, there was no government in Kashmir. Center sought approval of its actions altering the status of the disputed state from its own subordinate Governor.

Modi regime’s actions of ending Kashmir’s special status and turning it into a union territory means that New Delhi will have to rule Kashmir with an iron hand. Abolition of Article 35-A has set a stage for brining in migrants from India to change Kashmir’s Muslim demography. There are already reports – not fully confirmed at this stage – that RSS gangs have been made active in outlying districts of Kashmir. Their task is to frighten the locals to leave their homes, and to create a wave of mass refugees towards the Line of Control with Pakistan (LOC). This is clearly the kind of ethnic cleansing, from a primitive mind set that reminds world of Hitler’s Nazis or Milosevic in Serbia in 1990s.

So Modi government’s actions leave no doubt that it considers Kashmir a matter on which it can act with impunity. Modi’s parroted statements at G-7, describing Kashmir as a “bilateral issue” siting next to Trump, were only to give a public excuse to Trump to back off. Indian media’s jubilant reaction on these double standards (obvious lies) demonstrates that there is a universal death of consciousness across India – country of 1.3 billion humans has been conquered by fundamentalists. World however refuses to open its eyes – Appeasement of Indian Nazis continues.

The reality is that United Nations maintains United Nations Military Observer Group (UNMOGIP) in India and Pakistan. The organisation has offices in Srinagar and has often been the site of Kashmiri protests. It also has offices in Rawalpindi and Azad Kashmir. However, unlike Pakistan, India does not let the group anywhere near the Line of Control (Loc). But UNMOGIP’s presence itself is proof that the Kashmir issue is an international one.

Therefore, the Modi government, the Indian opposition and media have no rational basis to claim that Kashmir is an internal matter. The only rationale they have is that they have a strong and brutal military presence in Kashmir and they are now bent upon changing the demographics through fear and mass exodus – something against every cannon of international law.

While the world continues to appease a fascist regime in New Delhi, videos circulating on social media and even international media have shown how the population of 8 million is under siege. Soldiers are seen pumping live ammunition and pellet guns into crowds. Young men are picked up from their houses and beaten on roads. Rape fantasies disguised as “marriages with fair-skinned dark hair Kashmiri girls” are being expressed publicly and turned into popular songs. Kashmir’s beautiful valley, often referred to as ‘Paradise on Earth” has now turned into a maximum-security prison. With curfew running into 24th day, Modi’s India continues to operate behind the secular face of Gandhi and Nehru. Ironically, it was RSS that killed Gandhi. Today RSS controls Modi’s BJP. History has turned full circle.