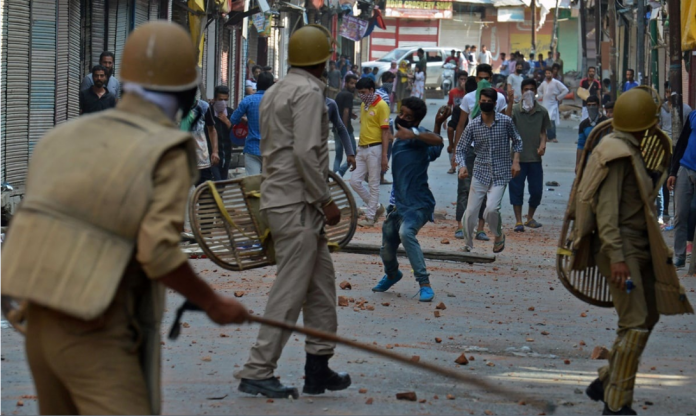 What are India and Pakistan upto? What is going on behind the scenes? Who is sending desperate messages to whom? How come Pakistan suddenly makes an offer to India for talks on Kashmir? And how come India which has  always rebuffed and snubbed Pakistan on the issue of Kashmir, as long as our living memories go shows a kind of interest in talks?

Yes! India has talked of its usual mumbo jumbo of ‘talks on terror’ and all that, but nevertheless is showing willingness for a foreign secretary level talks with Pakistan. Why? What has changed? What are the objectives here? Are both trying to fool Kashmiris? Could Nawaz Govt be trying to bail out Narendra Modi out of a difficult and embarrassing situation? Is Washington signaling something to Islamabad?

Current predicament, and growing human tragedy, in Kashmir is utterly painful. But its a mess wholly and solely created by Indian intransigence. India’s increasing desire, getting worse since Modi’s rise to power in Delhi, to forcibly integrate Kashmir into the India proper like any normal Indian state, in total disconnect with region’s history has set the stage for the massive protests. The killing of Burhan Wani was an Indian action, the spontaneous outpouring of grief by hundreds and thousands of Kashmiris only reflected the helplessness, the widespread anger, the alienation that exists there to India’s rule. Brutal suppression of peaceful unarmed political protests by common citizens was once again an Indian decision. Where else, in which other part of India, have Indian authorities ever responded to political protests by pellets? The highhandedness, the sheer insensitivity towards Kashmiris only proved that its not only Kashmiris who don’t consider themselves ‘Indians’ but Indian state also treats them as ‘aliens’ as ‘outsiders’

Modi government’s repeated attempts to divert attention from the crisis in Kashmir by endlessly talking of Baluchistan, reflects its desire to convince Indians and the world at large that its problems in Kashmir are only due to Pakistan. As the protests in Kashmir mounted, as the international media started to focus, and as the Indian civil society started to ask difficult questions, the entire Indian establishment, its assets in media, its assets in think tanks, its old hands now positioned in social media all started to sing chorus of ‘Why world does not talk of Baluchistan?’. Receiving signals from their minders in Delhi, the self-exiled Baluch leaders, assets in Pakistan’s so called civil society and media all started to harp of Baluchistan. This situation finally culminated in the savage act of terrorism in Quetta in which almost 100 innocent people, mostly lawyers, lost their lives. It looked like the ‘real thing’ Modi government was waiting for. So after the terrorism in Quetta, a visibly pleased Narendra Modi unabashedly took to the podium as champion of Baluch grievances with veiled and not so veiled threats towards Pakistan.

So can the geniuses in Pakistan’s foreign office – Honorable Sartaj Aziz & Company – and PM Nawaz explain what are they up to? What can they offer India at this stage? How can their overtures help Kashmiris? And if they also know what everyone else knows that talks on Kashmir, especially at this stage, will not result in anything then the simple but awkward question is: why are they making these offers? (As Sartaj Aziz and Pakistan’s foreign secretary did 2-3 days ago, first by statements and then by inviting Indian High Commissioner). Even more interesting question, a real million dollar question is: Why India is even willing to talk? What can India get out of Pakistan? After all we have seen and we have heard the positions of Rajnath Singh, India’s home minister and Mr. Parrikar, the Defense Minister. Important cabinet ministers they are, and their sentiments fully backed up by Indian prime minister, Narendra Modi don’t leave any doubts as to what Indian political establishment’s position is. So what is Nawaz Government upto? Series of puzzling questions brings us to the mother of questions: Is this a purely Pakistani initiative or Pakistanis have been told, ordered or requested to come up with optics to fool Kashmiris, and bail out Modi government out of its difficult and embarrassing moments?

Painful reality is: Pakistan has no solution, to the current situation in Indian part of Kashmir. Call it ‘Indian Occupied Kashmir’ or the ‘Indian Administered Kashmir’ the fact is that its under Indian control and maintaining essentials of human life, of movement, of economic activity and so on are Indian responsibility. Irrespective of what long term solution emerges, – autonomy, greater autonomy whatever – in the immediate, its Indian responsibility to provide and maintain peace and to preserve the dignity of human life. None of the Indian actions, spread over the past forty days or so, so far look reassuring. Amidst this scenario, any actions, overtures or gestures on part of Nawaz governemnt that creates the impression that Pakistan somehow holds the key to the present crisis only plays in to the Indian propaganda – internally to the Indian public and externally to the world at large – that ‘Pakistan holds the key’. This is another repeat of the American mess in Afghanistan, where the US continues to demand of Pakistan to fix up what it has filed to do despite its massive resources.

India has to realize that Kashmir is not ‘India proper’; its neither a standard normal Indian state even under the terms of accession which India exploits to justify its control, nor it is so under the Indian Constitutional arrangement that accepts a special status under Article: 370. India must find an immediate solution, an immediate solution for the present crisis; it may not be the maximalist demand of ‘Azadi’ as expressed by Kashmir’s restless youth but it certainly can be some sort of ‘greater autonomy’ that changes the status quo, structured in a way that Indian governments can sell to the Indian public, media and politics.

Acrobatics of Nawaz Government, as witnessed so far, can provide ‘insincere optics of Indo-Pakistani talks’; these optics will be sold by the ‘Modi sarkar’ to the world as evidence of Indian efforts to find a solution and as proof of Pakistani intervention from outside. PM media team in Islamabad can definitely sell these ’empty gestures’ to the PMLN’s poorly educated punjabi support base, as amazingly bold moves by Nawaz Sharif for the suffering Kashmiris and Kashmir cause; but the sad reality is: Nawaz government appears only to be playing in the hands of Modi Sarkar. Is this by stupidity or by design? We don’t know.