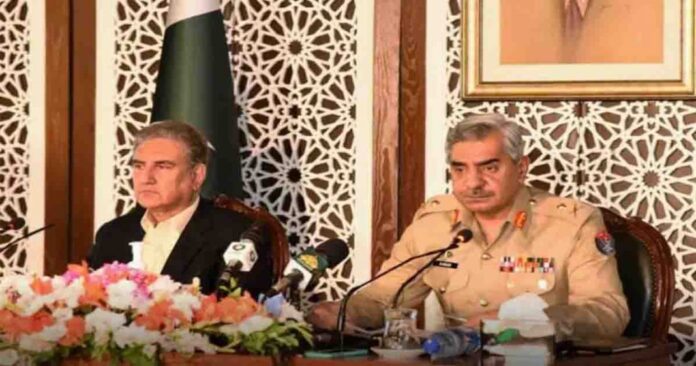 A joint presser by Pakistan’s Foreign Minister Shah Mahmood Qureshi and DG ISPR Gen. Iftikhar Babar, in the second week of November 2020, provided details to media from a large dossier, “Indian Efforts to destabilize Pakistan”. This dossier since then has been shared with the UN and the representatives of P-5 countries.

Though this is not the first time, Pakistan has accused India of launching covert operations against its territories but in terms of scope and the intelligence driven details shared this “Foreign Office Dossier” was a remarkable compendium.

Dossier’s brief abstract of around 8 pages was shared with media persons however a detailed dossier (over 100 pages) – shared by Foreign Secretary Mr. Sohail Mahmood, with the representatives of EU, OIC and non-permanent members of UNSC – outlined how Indian Intelligence Agency (RAW) has been using its diplomatic missions (Embassies and Consulates) in countries bordering Pakistan for organizing, directing and supporting the various terror outfits across Pakistan.

While it used the term “neighbouring countries”, subsequent details in the dossier, made it clear that most of these RAW activities are taking place through Afghanistan. Interconnected nature of details, with names of Indian officers, details of banking transactions, letters, transcripts and audio clips of taped conversations between Indian intelligence officers and their Afghan and Pakistani assets and members of the terror outfits were revealed to send a clear message to New Delhi (and its allies) that its modus-operandi stands exposed.

Economically prosperous Pakistan does not fit in with Indian vision

Perhaps the most shocking revelation was that the Indian PM, Narendra Modi is directly supervising a covert cell against CPEC projects in Pakistan (see details in: Indian PM Modi directly running Anti-CPEC terror cell). This Anti-CPEC cell, created in RAW Headquarters in 2015, with an initial allocation of approximately US $500 million (PKR. 80 billion) is mandated to “undermine, delay and disrupt CPEC projects through patronage of proxies supplemented by well-orchestrated information offensive”.

RAW has also managed to organize a militia of 700 persons to undertake terrorism in Balochistan. A commission of 24 members was created, perhaps to supervise operations, with 10 RAW operatives. $60 million were dedicated to the operations of this force – from Dossier it is not clear if this, 700 strong militia, is also being managed by the CPEC cell or it is a separate initiative.

But one thing is clear, CPEC which is primarily a commercial initiative (with Chinese low interest long term loans) to create better integration in Pakistani economy, production and logistics chain, is considered a strategic threat by Indian establishment.

There is much evidence to suggest that till end of 2015, US State Department did not identify CPEC as a threat. More than one US envoy openly welcomed it, considering it positive for Pakistan’s battered economy. However, by the June of 2015, US diplomats were quietly telling Pakistanis that Indians were doing massive lobbying in Washington to convince the Administration, Congress, media and think tanks that CPEC is a threat to the US and western interests.

Indian activities in recent years – since the arrest of RAW agent, Commander Kulbhushan Jadhav in 2016 – and now elaborately revealed by the Foreign Office Dossier make it clear that an economically prosperous and politically stable Pakistan does not fit into Indian establishment’s strategic vision for the region.

Joint briefing mentions and the dossier explains in depth that Attacks on Pearl Continental Hotel Gawadar (May 2019), Pakistan Stock Exchange, Karachi (June 2020), Agricultural University Peshawar (2017), Army Public School (December 2014), Chinese Consulate Karachi, and scores of other attacks across Pakistan were all planned and coordinated by RAW working with different entities. For instance, attacks in Balochistan and Karachi and all along the coastal belt are being coordinated through the Baloch sub nationalists like BLA, BRA and BLF while attacks across KP and Punjab are coordinated through splinter units of TTP.

In recent months RAW officer, Col. Rajesh based in Kabul, has worked extensively to create a consortium of Islamist terror outfits with the Baloch sub nationalists to provide for better synchronisation of their operations. (see details in: Indian Colonel Rajesh directing terror in Pakistan from Kabul) Joint presser gave facts and information that must have been collected over several months if not years.

Much relevant information was about Karachi and how MQM under Alftaf Hussain (referred to as AHG) kept receiving funding from the Indian intelligence agency, RAW. Presser pointed out that intelligence work is difficult and not every transaction can be traced.

However, it referred to financial transactions about which solid evidence now exists about amounts, routes and dates. For instance, MQM Altaf Hussain was being financed, at one point, through two Indian companies (JVGT and Paras Jewellery) via Britain and received at least US $3.23 million through this route alone. (more than £ 2.45 million, sterlings).

At another point, a table in the dossier points out that out of Rs. 22 billion Indian Agency spent in supporting terrorism across Pakistan around Rs. 18.57 billion went to militants of Balochistan. This again emphasizes the great importance of “destabilizing Balochistan” in the overall India design.

However, there is a word of caution when it comes to financial figures. Sources familiar with the compilation of this dossier explain that actual figures could be much higher – these Rs. 22 billion represent the transactions that have been documented through intelligence work, confessions of arrested individuals and debriefings of suspects.

Presser informed how Indian agencies had been directing terrorists for key assassinations of political, religious and civic leadership and offering financial rewards for successful execu tion of assassinations, suicide bombings and blowing up IEDs. A Rs. 10 million reward was usually settled for suicide bombings, vehicle based improvised explosives device (VBIED) and targeted suicides.

Lesser financial rewards like Rs. 1 million was offered for simply blowing up an IED. Much of that “financial calculus” corresponded with the strategic thinking, referred to as “Defensive Offense” expounded by Ajit Doval in 2014 – for instance his lecture at the Sastra University, Chennai.

He had also spoken extensively about these and similar ideas at several universities and think tanks; his lecture at the Australia India Institute, in early 2014, when he was still with the BJP supported Vivikanada International Foundation is very helpful to understand where all this is coming from. Interesting part is whereas India – unlike Pakistan – never fought and suffered for the west; it successfully created an exaggerated narrative of suffering at the hands of Al-Qaeda and other international terrorists connecting these with Kashmir and Pakistan in global consciousness.

Indians – being masters of shaping narratives – have spoken about Al Qaeda and OBL as if these were not by-products of middle eastern politics and street reactions against the west, were not essentially Arabs, but creations of Pakistan. This was important to preserve India’s diplomatic influence across the Arab middle east, but students of international affairs and diplomacy must appreciate the refinement Indian foreign office has displayed in handling these narratives.

All this – Dossier being only the tip of the iceberg – brings us to the fundamental question that what India’s overall vision for this region is? And how can Pakistan fit into it? 73 years is a brief moment in the kaleidoscope of history. India, in these past 73 years, has used covert operations, political destabilization and coercive military action to change demographics, political landscape and state structures.

1947 Genocide in Jammu, Operation Pollo in Hyderabad, Integration of Goa and Sikkim through covert operations, creation of civil war in former East Pakistan leading to Bangladesh and creation of insurgencies in Balochistan, FATA, Swat and massive political destabilization across Pakistan through the use of proxies after 9/11.

And while it was doing all this, New Delhi was telling the world that it was a victim of Pakistani terrorism and that it wants a peaceful democratic Pakistan. Modi regime, since August 2019, is once again embarked on a mission of “demographic change” in occupied Kashmir with shameless silence of the international community.

What can Pakistan achieve with the Dossier?

Or more specifically with this new bold audacious initiative which has happened because Imran Khan government had the spine to take a stand – in its national interest. One can now understand why Modi regime had spurned all offers of talks from the Imran Khan government and instead went on front foot attacking and vilifying Imran Khan from the very moment he offered dialogue (We will move two steps, if India moves one step, July 25th 2018, Election Victory speech).

New Delhi saw Nawaz Sharif – and perhaps Zardari – as “useful idiots” small characters at the helm of affairs in Pakistan. It was easy to manipulate them, they simply did not belong to the class of men that is supposed to rule nation states. Delhi correctly identified Imran Khan as a potential problem. And the emergence of this Dossier only proves that Delhi’s fears were correct.

Pakistan Foreign Office expects after its detailed dossier – at least in its formal position – that Delhi needs to do the following: institute cases against the officers and individuals mentioned in the dossier, stop using “terrorism as a state policy” and stop using third countries for terrorism against Pakistan.

Privately however all diplomats understand that demands of real politick, strategic and commercial interests of P-5 and most western nations are aligned with New Delhi, so no real pressure is expected. One real breakthrough which Pakistan desperately needs and is not obvious immediately is that this initiative and its diligent follow up sharing more details with media can help eradicate the deep penetration of Indian narrative in Pakistani politics, media and civil society.

New Delhi – especially before the rise of Modi regime – had successfully persuaded large sections of Pakistani media, politics and civil society that India wants peace and stability for Pakistan, and it is Pakistani establishment that wants a continuous unending conflict with India. Nawaz Sharif was not the only “useful idiot” New Delhi was using, these were in hundreds.

If Pakistan Foreign Office and Establishment can manage to win the internal front it will lay the basis for better realistic relations between India and Pakistan. Geography cannot change. Islam and Hinduism have coexisted for more than 1000 years, likes of Khadim Hussain Rizvi and Narendra Modi are aberrations not norms.

India or Hindustan was always a reality; New Delhi establishment has to grasp that Pakistan too is a reality, it has earned its place under the sun, it won’t collapse whatever New Delhi may do and the way forward is a broadbased dialogue (may be a secret one, away from media radars). If Foreign Office Dossier can achieve this “realism” in Delhi, then it has certainly done its job.