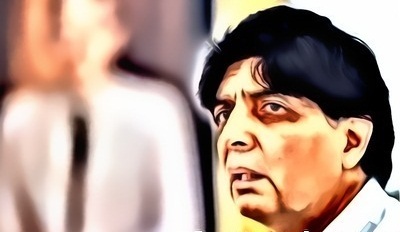 Rumor mills from Lahore to Islamabad are alive with the buzz that PM Nawaz Sharif has finally decided to sack his Interior Minster, Ch.Nisar Ali Khan.

With his audacious uncompromising stand on issues of national security, Indian intervention in Pakistan, relations with PPP and what appeared as a calcuated defiance to the Sharif dynasty, Nisar was always an ‘odd man’ of PMLN. A rare voice from his party that echoed public sentiments on issues as diverse as Ayyan Ali and Rajnath Singh – to whom he recently gave a befitting reply during the SARRC Conference in Islamabad.

PMLN never known for men with spine, has in recent years degenerated to a level where Sharif clan has assumed a ‘God like’ cult where no one has left any courage or capacity to disagree with the line from the top. In this milieu of moral death, Nisar was a continuous  embarrassment to all honorable men who looked small and meaningless every time he opened his mouth on a policy issue. So there was no dearth of dagger drawn conspirators who reported his blasphemies to a Nawaz Sharif, already losing patience with his old comrade. But reportedly Nisar’s outburst against Mehmood Khan Achakzai – admittedly without directly mentioning him but making references that were more clearer than poor Shahid Masood made towards judiciary – and his recent war of words with PPP leaders, Khurshid Shah and Aitzaz, that lead to the opposition’s boycott from parliament have proved to be the last straw on camel’s back. Opposition’s boycott had prompted an unusual pleading from Nawaz Sharif to them to return.

Many wonder why Nawaz had not sacked Nisar so far? After all his audacities and his blasphemies had been continuing for a while and PPP chorus against him  for being an ‘establishment stooge’ a trojan horse inside the Nawaz cabinet, what Khurshid Shah endlessly described as ‘Asteen Ka Sanp’ was going on for a while – at least since the turbulent days of dharnas in the exciting summer of 2014. Nisar remained absent from important meetings and made statements and took positions despite forewarning – as in the case of Achakzai and PPP. Even his rather honorable outburst to fix Indian home minister, Rajnath Singh, was apparently his own gesture – though initially it was thought to be the policy of Nawaz government to preserve some public space and honor in view of Indian arrogance on Kashmir. Reportedly Nisar had also agreed to preside the press conference in which RAW agent, Kulbashan Yadav, was to be presented to the media; though he never got an approval from his panicked boss and later a lack luster press conference was organized, with a video confession, by an ill-informed DG ISPR with a muted information minister who looked very unhappy with his ordeal. So things were cooking right and left, waiting to come to a head.

Despite a commitment with Zardari through his emissaries, for letting Ayyan Ali leave the country, she remained stuck and Nisar could be blamed for the embarrassing situation. Look carefully and you realize that much of the dramatics that played out in Pakistani politics recently, in the last few weeks, again center around Ayyan Ali and her powerful well wishers.

Because, now when the dust is settling on Panama files – or so it seems from the point of view of most pundits – it is becoming obvious that PPP remains the B-team of Nawaz government and whatever overtures it makes in the political field are only temporary tactical moves to fool the public and media and to bail out Nawaz regime with which PPP remains strategically aligned – notwithstanding Bilawal’s rebellious tweets and Barrister Aitzaz Ahsan’s idealistic tantrums. And a recalcitrant egoist Nisar bent upon defending the most useless commodity in Pakistani politics – self respect – is an irritant in terms of close working relations with Asif Ali Zardari. And in the growing ‘Putinistic Surveillance State’ what Pakistan has gradually become since 2013, where almost everybody, worthy of anything in PMLN, is being heard, transcribed and mercilessly analyzed with the help of new gadgets and apps ‘loyalist spooks’ have been buying right and left, it is certain that diaries on some one as big and mysterious as Ch. Nisar had assumed the size of a national library. (though spooks work under him, officially) So many wonder why Nawaz tolerated him for so long?

Because King Nawaz was afraid! Political insiders claim. He was afraid that Nisar must be egging on something, and if fired unceremoniously he might be wooed by the PTI and may be pushed by the establishment into leading some rebel group. So what has changed now? political insiders claim that now Nawaz feels that Imran and PTI have been virtually decimated, rebel groups have been neutralized and his fears of the establishment, though always exaggerated for political reasons by all sides are – quiet contrary to media driven impressions – minimal, almost non-existent. This gives Nawaz the necessary confidence to act.

But the word is already out and is being absorbed in the political circles. As a last resort, Nawaz asked his brother, CM Punjab, (man with all solutions in the PMLN) to restrain Nisar from what is considered by PM secretariat as ‘absurdities’ but apparently it did not work. So will Nawaz finally act? Timing of sack was supposed to be some weeks in future, connected with some other decisions which PM has to take, but will PM still act if the political uproar becomes ferocious. Lets see how it builds up and how PM advisers and official spokespersons respond to these rumors? Will they skirt the question or deny it as ‘totally absurd’. Lets see!

[Moeed Pirzada is a TV Anchor and Editor Strategic Affairs with Dunya News Network. He has worked in Central Superior Services, has studied International Relations at Columbia University, New York and law at London School of Economics, Twitter#MoeedNj ]