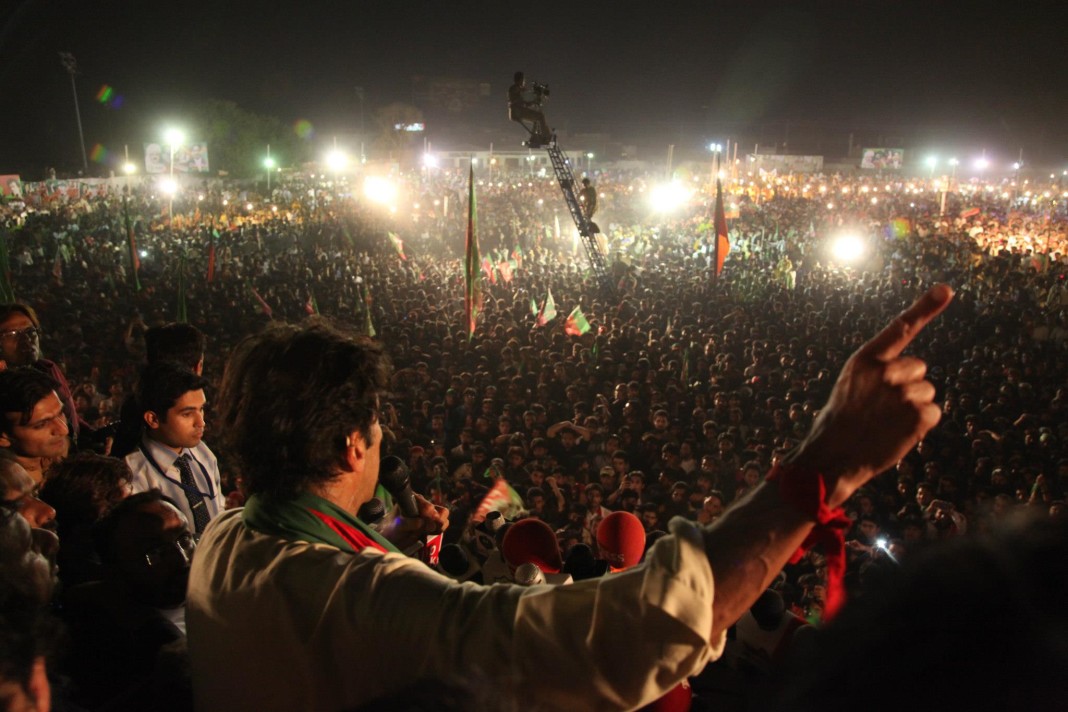 Why Karachi Jalsa is a Game Changer? – Many things can be said about this large assembly of men and women that is described around quarter a million. (250,000 very conservative estimate). This collection of mankind at a short notice at one point around one issue, “Go Nawaz Go” is in itself a big event from any global or historic standard.

Second, these men and women were not brought in buses, trucks and tractor trollies by Police and Patwaris and unlike MQM, Imran Khan’s PTI had no solid organizational structure (no sector commanders or street & mohalla teams) in Karachi that could force, persuade and transport an ocean of humanity to Mizar-e-Quaid. They came of their free will, because they wanted to. It was thus an expression of human spirit and belief in something. They represented Pakistan’s middle classes: professionals, civil servants, doctors, lawyers, Pilots, Air hostesses, engineers, office workers, IT Experts, Army & Police Officers, managers, factory workers, Students and Professors and so on. And there were fathers with their young daughters, and brothers with sisters and many of them proudly told me that they were impressed by the mutual respect, discipline and sense of solidarity from others around them.

For the past quarter century we and the world argued that where are Pakistan’s middle classes? why don’t they participate in politics? why don’t they change the game? So here they were expressing their disgust against a Dynastic rule by few families (Sharifs, Zardaris, Maulana Fazal ur Rehman and Achakzais), and control over all state institutions from Police and bureaucracy to Judiciary and Election Commission and they were there to protest against Rigged Elections and an elitist mindset that is not ready for political reforms. All that is relevant; but the real importance of Karachi Jalsa is that it has broken the logjam of the past few weeks. It has destroyed the lens through which govt and its supported and bought media was trying to portray the “movement for political reform”.

Nawaz Govt had tried all the tools in its kit – from Police crackdowns, Judicial sanctions and arrests to Army bashing in the parliament and garnering international support in the name of civilian supremacy – and was now waiting for the protests to die down under rain and sun and fatigue. Its attempts to paint “dharnas” or sit-ins as the final point of Imran Khan’s struggle and a failing struggle with Imran painted as a loser or desperate charlatan was bearing fruits.

But all of sudden the Karachi masses have sent the roaring message that ” we are not just a few thousand fatigued men and women sitting outside the parliament, they may be the symptoms of us, a focal point, but we are in millions, we are in cities, we represent the brain of this nation, its future and we are everywhere and sooner or later your propaganda mills against us will fatigue and fail, and the world all around us, be it Americans or British or Europeans or Indians or Chinese, will have to realize that instead of believing in sham elections and failed theories of dynastic politics they have to deal with us for we the middle classes of Pakistan represent the future. We carry the destiny of Pakistan and not the illiterate rural voters of Zardari, or the medieval supporters of Maulana Fazlar ur Rehman and Achakzai who still live in 15th century without realizing that how these dynastic parasites are exploiting them. And we want a political deal.

PM Nawaz is continuously hoping against hope to fool everybody in the country and across the world that what he faces is not a genuine political challenge for accommodation and reform but a farce created by his military and that democracy is under siege and he is fighting for civilian supremacy over military. He has succeeded to a great extent that is why even many decent and honest people in media, in civil society, in legal community, in bureaucracy and on social media and most in diplomatic community and across the world supported him for they thought that “democracy is under attack”.

You must question: how is it possible? how can they fool so many intelligent people? Answer is: PMLN disinformation machine is very smart; it is capable of playing tricks through double triple speak and is very well financed; after 2008 elections while they ruled 60% of Pakistan, its richest province with most resources, they successfully used a nexus of media and judiciary to paint themselves as “opposition” and thus saved themselves from the “anti-incumbency” feelings that confront every government after 5 years. Its height of stupidity when most international observers and many in Pakistan say that 2013 elections brought a change. There was no change; change came in 2008 elections when PMLN and PPP displaced incumbents “Q” from Punjab. From 2008 onwards, PMLN controlled Punjab and by virtue of their solid control over Punjab and its bureaucracy they displaced PPP from center in 2013.

Most forget that Elections that determined the federal govt were fought in Punjab. PMLN are smart in mind games; you have to accept that. But that roaring sea of humanity in Karachi alive with slogans of “Go Nawaz Go” will now compel minds in and outside Pakistan. World will also have to ponder: Can Nawaz continue to rule Pakistan with iron hand without a political compromise? Why he has no ability to resolve conflicts? What is the nature of this conflict aferall? Is he pitched against the military or urban middle classes? And Can he deliver in his present demeanor?

Nawaz Sharif & PMLN have consistently tried to avoid a meaningful political deal. They are only playing tricks and gimmicks. They cannot do that anymore. They are only fooling themselves. Sooner or later Nawaz has to agree on a “Credible Meaningful Election Audit with a JIT”, Electoral Reforms and new reconstituted Election Commission and Early Elections, (under the supervision of a credible supervising force) may be in the beginning of 2015 or autumn of 2015. And I don’t see how politics of Punjab can be healed without resignation of CM Shahbaz Sharif; he may even renovate his politics by presenting himself in front of the courts and clearing his name before the next elections. This will be best for him.