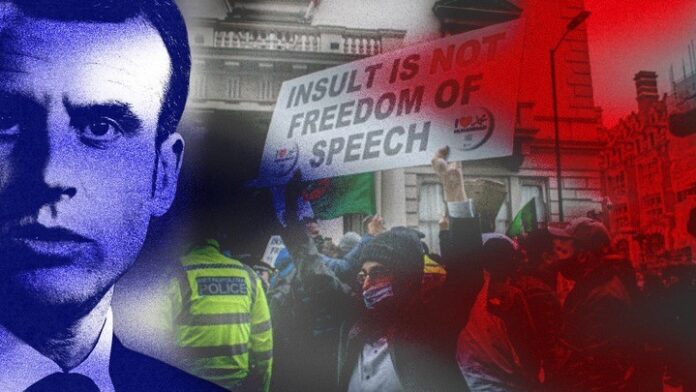 France and its revolutionary ideas have given much to the world. From Rousseau and Voltaire to Emile Durkheim to Fernand Braudel – the historian and leader of the Annales School whose work, “History of Civilizations” was a treat for intelligent minds everywhere. French ideas have inspired respect for French intellect.

Unfortunately, the narrow-minded reactionary mentality that has gripped France in recent years does not look good for this great nation. A decision, a few weeks ago, by French cities – Montpellier and Toulouse – to project Prophet of Islam’s controversial depictions from the French satirical newspaper Charlie Hebdo onto town halls in Montpellier and Toulouse for several hours appears to be the classic textbook example of this “shrinking mindset” -and unfortunately being defended in the name of “ideas”.

If any Muslim government, for any perceived reason, reacts by displaying insults outside a church – and remains unchallenged by a superior authority of the land – it will be seen insane by most of the world. Yet most in France have not realized that actions like the ones repeated in Montpelier and Toulouse – with official blessing were disgusting acts of hate towards two billion Muslims of the world. And these are precisely the kind of arrogant acts that are increasing hatred and mistrust in an increasingly shrinking world.

Samuel Paty’s murder was an unbelievably horrific crime, and every decent man and woman in the world is appalled. It would have been better if his insane murderer had been tried and hanged (by introducing capital punishment) instead of being shot dead by French police. President Macron did the right thing when he posthumously awarded Paty the Légion d’Honneur, France’s highest civilian award.

Every French city should have hung his images from the government buildings but insulting Muslims all over the world – who are not even aware of what’s happening inside France’s complex political crucible – does not bring any glory to French people and institutions.

Few days before Paty’s tragic murder, Emanuel Macron had made comments that “Islam is a religion that is in crisis everywhere”. No one should deny that. Muslim countries, communities and societies are passing through difficult transitions trying to adjust with the demands of post-industrial modernity – look no further than Saudi Arabia, UAE and Pakistan. But can Macron or any French political philosopher in all honestly deny that France itself is passing through a huge crisis of identity?

It is continuously battling with its five million-plus Muslim citizens, almost 10% of its population. Instead of accepting this as part of its difficult and cruel – if not outright barbaric – colonial legacy in Algeria and elsewhere – its elite are trying to put it on Islam. And French societal and political problems and challenges are not restricted to its Muslim citizens, but this will take us beyond the scope of this discussion.

Coming back to the “Prophet’s caricatures” this needless provocation is being permitted across France and Europe for one or the other pretext. When it first started, around 2005, it landed in courts and was dealt with utmost hypocrisy and double standards. Outlandish claims – like the one Macron made about Islam – were made about “our values” which had to be defended at all costs.

Failure of the courts to deal with the controversy lead to trouble and violence on the streets. An awkward moment of truth came when Flemming Rose, culture editor of the Jyllands-Posten newspaper, in Denmark, told CNN’s “American Morning” program that his paper – as per the policy of freedom of expression – will also publish the Iranian Holocaust cartoons.

Hamshahri, an Iranian paper, not without encouragement from Tehran, had said it wanted to test the boundaries of free speech, echoing the reasons Jyllands-Posten and other European papers had given for publishing the caricatures. But the European claim of “our values” ended in naught when Fleming Rose, the Danish editor, who had earlier commissioned the Prophet Muhammad (PBUH) cartoons, at the centre of a global row, was sent on forced leave.

Jyllands-Posten’s editor-in-chief Carsten Juste apologized for the offence caused by Fleming’s state of mind and told a Danish newspaper that the paper’s editors told Rose “to take a vacation because no-one can understand the kind of pressure [Rose] has been under”. No one across Europe stood up, and no one was sleepless. So much for the values.

A few weeks later, Fleming Rose, had what we euphemistically refer to as “Software update” in Islamabad when he told the media and the world, “I have committed an error – I am 100% with the newspaper’s line”. Khadim Hussain Rizvi had suffered the same kind of “software update” when he issued “videos of apologies” from jail in 2018 – after the insolent comments he had made.

Going back to Europe of 2015; within those days, we also found out that earlier the editor of Sunday edition of Jyllands-Posten had refused publishing cartoons of “Jesus resurrection”. “I turned them down because they were not good – their quality was not good,” Jens Kaiser, the editor, was now telling the world that his decision to turn down was purely a “matter of artistic quality”. But several months ago, when he had rejected the “Jesus cartoons” he did not tell the cartoonist that he expected “better quality”, he told him that these will “provoke an outcry.”

In 2015, five years ago, a US-based Turkish origin academic, Mustafa Caglayan reminded the Europeans about Der Sturmer and Julius Streicher. He reminded them that in Nazi Germany, there was an anti-Semitic weekly newspaper called Der Stürmer. Run by Julius Streicher, it was notorious for being one of the most virulent advocates of the persecution of Jews during the 1930s.

Streicher’s humour and values were loved by the Germans of his generation, and he made millions out of it. What everybody remembers about Der Stürmer was its morbid caricatures of Jews, the people who were facing widespread discrimination and persecution during the era. Its depictions endorsed all of the common stereotypes about Jews – a hook nose, lustful, greedy.

Jewish academic, Norman Finklestein reflecting on the Charlie Hebdo caricatures of the Prophet Muhammad argued that these did not constitute “satire,” and what they provoked were not “ideas,” Satire is when one directs it either at oneself, causes his or her people to think twice about what they are doing and saying, or directs it at people who have power and privilege, Finklestein argued.

“But when somebody is down and out, desperate, destitute, when you mock them, when you mock a homeless person, that is not satire,” that is “sadism”, Finkelstein said.

He argued that in the beginning of 21st century Europe, the “desperate and despised people” of today are not Jews of 1930s but Muslims. And this Jewish professor reminded his readers that at the end of the war, Streicher was convicted of crimes against humanity in the Nuremberg trials, and was executed. Streicher was the first member of the Nazi regime held accountable for inciting genocide by the Nuremberg Tribunal, and he was hung for those cartoons.

French and the Europeans need sombre reflection on what they are doing. They have a difficult history with Islam – and the middle east. They consider themselves above and beyond religion. But maybe this is not truly “beyond religion” but an evolution within a historical religious identity.

Christianity has been the principal idea that defined and created Europe. Anyone who denies this knows nothing. But Christianity like Judaism is an Eastern idea born into the Middle East. Initial Christian societies were in what is today Palestine, Israel, Lebanon, Syria, Iraq, Iran, Egypt and Saudi Arabia. Christianity arrived in Europe marching along with the Roman legions. Islam -as an idea – later replaced Christianity from its birthplace, and that is why we had crusades in the 12th century.

West’s “ideas of secular society” originated from 15th century onwards as a result of internal conflict between various Christian denominations. This “secularism” was not born between religions, it’s a system of thought inside Christianity -and is supported by a common history, and evolution of consensus. There is a larger Christian identity in the background of European secularism that helps bind and connect. Thinking that it automatically applies beyond Christianity is a false idea. Anglo-Saxons have somehow handled these fault lines better.

May be continental Europeans can learn something from the “treacherous English” across the Channel. Khadim Rizvi was not merely the name of a man; he represented a “reactive mindset”. And reactive mindset – whether Muslim, Christian, Jewish or Hindu – is only “reactive mindset”. From descendants of Voltaire, Rousseau, Durkheim and Braudel one expects better rationality than being displayed by those in Macron’s France.