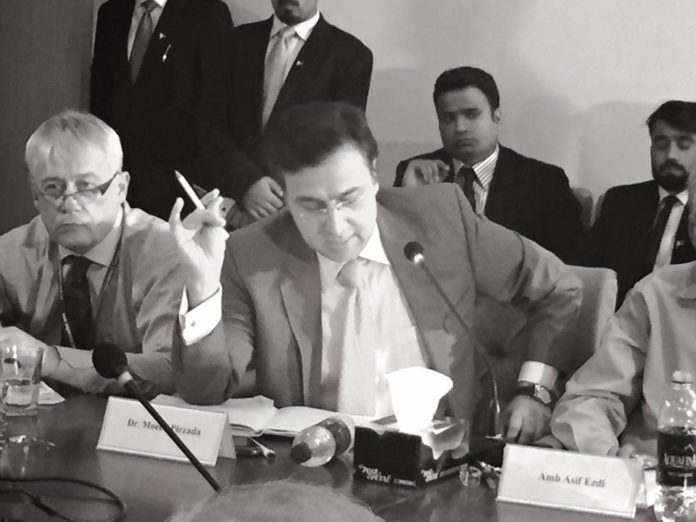 [Note: Read carefully how forced by a London Court in Jan 2000, Sharif family paid up $32 million to the Al-Towfeek Group, in the Hudabiya Paper Mill Case, to save their London properties, 16, 16-A, 17 and 17-A. Interesting Question is: Where the US $32 million came from? Most of Sharif family was in Jail at the time; so who paid? how paid? how the transactions were conducted? Did they have other ‘offs-shore accounts’ from where funds were mobilized? Did they sell properties in Pakistan to mobilize funds? If anyone paid for them, then why? What was the Quid pro Quo? In any case such large amount – US $ 32 million, i.e. $ 3 crore and 2o lacs – were not carried in a suit case..These questions remain unanswered to this day. Will a Pakistani Commission be able to ask and resolve this?]

IN order to reconstruct we must revert to the “ideology of Pakistan” and to the premier dictum of its Founder and Maker Mohammad Ali Jinnah: “The first duty of a government is to maintain law and order so that the life, property and religious beliefs of its subjects are fully protected by the state.”

Pakistani banks and lending institutions which handle state money and the people’s money were nationalized on New Year’s Day 1974 by Zulfikar Ali Bhutto for a highly nefarious purpose – to allow him and his government to lend to those who could not repay and were thus unable to borrow from elsewhere in accordance with banking norms.

Our last two ‘democratic’ prime ministers, Benazir Bhutto and Nawaz Sharif, plus their cohorts and admirers, robbed as much as they could from these very same institutions with the express purpose of not repaying anything, having successfully ‘fixed’ the relevant law-makers, law-dipensers andlaw-enforcers.

What I narrate illustrates how money is lent and recovered in recognized practising democracies where law and order prevails.

Hudabiya Paper Mills Ltd (first defendant), Mian Mohammad Shahbaz Sharif (second defendant), Mian Mohammad Sharif (third defendant) and Mian Mohammad Abbas Sharif (fourth defendant) , under English law and jurisdiction borrowed money from Investment Funds Ltd, operated by Al Towfeek Company (the plaintiff). Abiding by the Pakistani norm, they did not repay the loan. Al Towfeek went to court and the Order of Master Rose (The masters of the various divisions of the high court deal with routine matters) of September 4, 1998, was duly served upon Hudabiya and the three Mians of Lahore. Employing the usual delaying tactics, as applied in the land over which they misruled, the Mians filed an application in the court asking that the order and the service of the proceedings be set aside. The application was heard in chambers by Mr Justice Buckley of the Queen’s Bench Division. He wrote a one-page order on February 5, 1999, (as opposed to a 100-page judgment) which reads as follows: “Upon the defendants’ application for an order that the Order of Master Rose of 4 September 1998 and the service of proceedings be set aside pursuant to RSC Order 12 Rule 8 and that the plaintiffs do pay the defendants costs to be taxed forthwith and upon hearing leading counsel for the plaintiff and the defendants and upon reading the following affidavits : . . . . . [13 affidavits listed]

On March 16, 1999, the court delivered its judgment ordering Hudabiya and the Mians to repay the loan. The amount due was not paid and on November 5, 1999, Master Trench by a one-page order ordered that the properties of the Mians be attached.

“And it is further ordered that the plaintiff have permission to serve upon the second defendant, third defendant and fourth defendant in Pakistan a copy of this order together with a copy of the witness statements of Shezi Nackvi.

End of story. The Mians paid up and settled with the lenders. Master Trench recorded the ‘consent order’ signed by the solicitors of both sides on January 25, 2000 which reads as follows :

“Upon the plaintiff and the first, second, third and fourth defendants having agreed to the terms of the deed referred to in the schedule hereto “And upon the plaintiff by its solicitors undertaking not to enforce or execute judgment, or take any further steps whatsoever, in the action against the first defendant, save insofar as permitted by and in accordance with such terms

“By consent it is ordered that:

1) All further proceedings in this action be stayed, on the terms more particularly set out in the deed described in the schedule to this order, as between the plaintiff and the first, second, third and fourth defendants except for the purpose of carrying this order and the said terms into effect for which purpose the parties are to be at liberty to apply, including in particular, to apply in accordance with this order to enforce judgment against the defendants in this action in the event of non-compliance with Clause 3 of the said deed.

“The charging order nisi granted by Master Trench on November 5, 1999, be discharged forthwith upon payment in accordance with Clause 3 of the said deed with no order as to costs.”

To another matter, the power companies. HUBCO, KAPCO, and others have made shady deals involving, but not limited to, the companies themselves, the World Bank, other international lending agencies and our worthy ‘democratic’ prime ministers Benazir Bhutto and Nawaz Sharif aided by their team-mates. However, what is signed by the government must be honoured unless it can be commercially resolved out of court. The contracts with the power companies provide for international arbitration and WAPDA and the Government of Pakistan (whether civil or military) are bound by this provision. No foreign investor will invest in Pakistan if he is denied international arbitration and is compelled to take disputes to the Pakistani courts which he does not trust and is convinced are government-controlled and manipulated. The power companies are well aware of what they have done and are inclined to settle out of court. A commercial settlement is beyond the competence of military men. Our Finance Minister Shaukat Aziz should be empowered to lead a delegation of competent men of integrity trusted by the people to settle the outstanding issues.

The Asia Society annual corporate conference held this month in Shanghai was attended by a thousand delegates from all over the world, western and eastern, and was addressed by the prime minister of China and 43 leading world personalities in the political and business fields. The presence of our ambasador in Beijing, Riaz Khokar, marked our existence. No mention of Pakistan was made by any speaker, the country might not have been a part of Asia – or even of the world.

Of the greatest concern now is the physical law and order situation in Karachi. The least that a military government can do is to use, if and when necessary, the force and power it has at its command to stop rioters and arsonists from killing people and destroying public and private property. Case in point : the ransacking and burning of the offices of the Business Recorder on May 18. This government cannot be forgiven for what happened. If it had the will (the wherewithal it has), the least it could have done was to have ensured that no such incident took place.