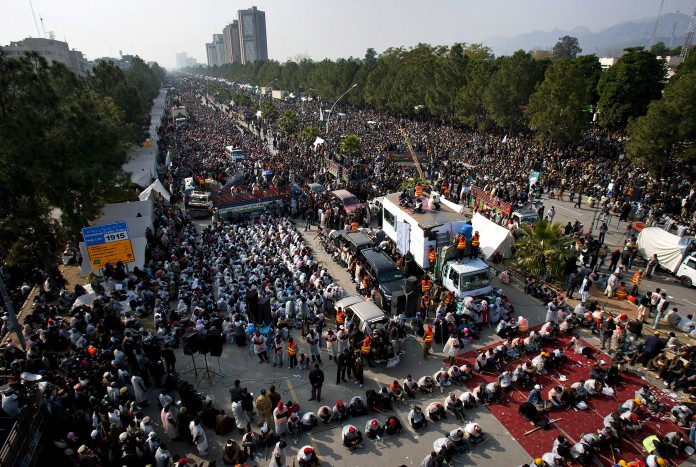 Dr Tahirul Qadri’s long march will continue to inspire debate in Pakistani politics for several more weeks. The kaleidoscope of events he unleashed was complete with all ingredients of a modern soap opera: thousands and thousands oozing out from small cities and towns of Punjab, braving the threats of terrorism, snakes, police high-handedness and petrol shortages reach Islamabad; they stoically face wind chills, thundering clouds and rain with babies in laps; they shout against corruption and demand change and reform without breaking a signboard; this Mahatma Gandhi style of discipline unheard in the rowdy politics of Pakistan was a testament to the leadership of a mercurial preacher-cum-politician, who lectured a nation of 200 million from a bulletproof container spinning a colourful narrative of hope, audacity and change interlaced with moments of suspense.

But despite the conviction and heroism of these men and women, Pakistan’s first real televangelist has not succeeded in delivering what he promised or threatened, though his theatrical performance has left strong impressions on public psyche and may influence the politics of elections – in ways apparently he had not intended.

From the beginning political parties and pundits aligned with them had offered various speculative theories to explain the motivations of this enigmatic character. The most prevalent theory had been that Qadri has been set up by the Pakistani establishment and the Americans to delay elections, derail democracy and help establish an interim set up controlled by the military so that the US can deal with one focused sovereign in Islamabad, while it withdraws from Afghanistan.

The PML-N remained convinced that this was a conspiracy to keep them away from heading a federal coalition after the 2013 elections, by splitting the ‘right of the centre vote’ in Punjab by stitching another entity along with Imran Khan’s PTI. Many sections of the PML-N – especially Chief Minister Shahbaz – were convinced that even President Asif Zardari and Interior Minister Rehman Malik may be part of this conspiracy; they were intrigued by the contradiction that on the one hand, Rehman Malik was telling Dr Qadri that he would welcome him in the federal capital; and on the other, he was requesting the Chief Minister to contain Qadri within Lahore.  All these theories might have elements of truth, but none could by itself explain what was happening.

In hindsight, we can argue with reasonable confidence that Qadri could not get any clear support from any quarter that mattered. Perhaps, the international or the domestic players that inspired his mission were unable or unwilling to come out more forcefully in the support of his cause, or a bargain was struck quickly making it unnecessary to provide him with any more oxygen; leaving him with no option but to find a face-saving exit from a stagnant situation that had become dangerously hopeless after the rain in a freezing Islamabad.

Should we forget that someone initially egged the MQM to join in and then someone convinced the MQM not to go ahead. One Islamabad insider argues that those powerful domestic and international ‘interests’ that coalesced and sustained the lawyers movement against Musharraf were not on the same page. And some argue that one of such ‘interests’ even advised PTI not to throw its lot with the protestors at D-Chowk. The PML-N, however, is convinced that Imran Khan and his kitchen cabinet panicked after the show of force by opposition stalwarts under Nawaz at Raiwind.

Life can be totally idiotic. The PML-N that had cried “conspiracy” appears to be the main beneficiary of “long march”; the PPP – apparently against whom Dr Qadri spent most of its rhetoric – has neither gained nor lost, but PTI that always stood for change and was admired by Qadri and his marchers seems to be the main victim of all what happened. This unpredictable outcome owes to the fact that political parties ultimately depend upon the morale of their support bases and the impressions of those neutral sections of the populations that support a winner. The PML-N supporters have been energised by what they saw a decisive, strong stand by Nawaz and his ability to assemble leaders like Maulana Fazalur Rehman, Pir of Pagara and Mehmood Khan Achakzai. Maulana though may have been unhappy by the dismissal of government in Balochistan and may have erroneously seen Dr Qadri and his protestors as another link of the same chain.

The PPP can convince its supporters that it defended democracy, successfully rebuffed a challenge from the establishment and has even recruited Dr Qadri as a supporter to frustrate the PML-N in Punjab. But PTI has been left with a difficult situation, both internally and externally. Its support base of young men and women were dazed by Dr Tahirul Qadri’s powerful rhetoric against the politics of corruption and status quo, and could not understand why Imran Khan did not come out strongly to strengthen the protestors at D-Chowk. For political observers, Imran and his kitchen cabinet failed to demonstrate the political skill or what you may call “killer instinct” to politically exploit a situation.

Whereas ambivalence of PTI leaders can be explained by the fact that they remained confused by Qadri’s antics, objectives and motivations and by the troubling question that who is controlling him and for what purpose?; and wanted to tread carefully due to the fears that this might be some sort of trap for PTI, after all Qadri’s continuous open overtures towards military, judiciary and PTI were far too direct and suggestive as if some sort of collusion or alliance exists. (For instance, he cleverly capitalised on the Supreme Court decision in the Rental Power Case). But irrespective of these genuine considerations inside PTI, the general public saw PTI and Imran as a bunch of indecisive and weak-kneed characters that kept on harping of tsunamis and change, but could not act; could not find intelligent ways to capitalise when a God sent opportunity presented itself; this may turn into a nightmare if the PML-N successfully markets the idea that Imran panicked due to the stand created by Nawaz at Raiwind.

Many political analysts and politicians quietly argue that the way interim set up will be shaped by the PPP and the PML-N, and elections will be held, PTI will get 15 seats and Qadri’s demonstration was PTI’s opportunity to fight for its political rights to demand changes in the system and it has failed to act. PTI is now confronted by a serious need of soul-searching and reflection to come up with internal and external communication to restore morale inside its support base and potential sympathisers.

Let me conclude with this. My Facebook page is followed by about 70,000; most of them are between ages 21 and 35; these educated men and women exist in different cities of Pakistan and across the world. I keep on asking questions; hundreds vote in such surveys and since you have to vote through your profile page, therefore, results are mostly accurate reflections of mood. When the long march ended, I asked them if the way the long march ended has strengthened their struggle for political change or it has consolidated the old politics of status quo? Almost 80 percent thought that the old political order has strengthened itself. And in a country of 200 million, with 65 percent young under 35, with more than 100 nuclear warheads and humongous challenges of unemployment, water and energy shortages and increasing frustration for want of solutions, this end of the long march disturbs me.