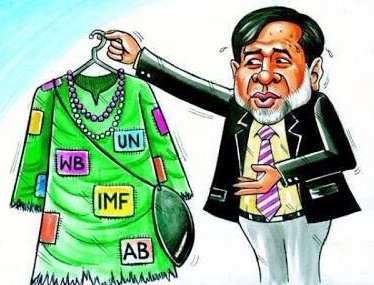 Dear Ishaque Dar sahib! This nation has not only disappointed you but everyone with an exceptionally good sense of humour. Is bragging about receiving an award from IMF that even IMF wasn’t aware of, that big a crime? (Memory loss perhaps). Banda poochay, kya aapka mazaq urranay walay naalayeqon ne khud kabhi doston k samnay apne iPhone ya Lamborghini k baray mein lambi lambi nahe chorreen? I remember how I used to pretend being a fighter pilot saving lives and sometimes a heart surgeon undertaking major surgeries in my childhood games.

The nation that couldn’t understand your misery when you confessed about laundering money for ‘not so Shareefs’ and denied later complaining about having been pressurized, doesn’t deserve you. Screw this country. (You’re literally halfway through the process already). Keep awarding and ‘rewarding’ yourself as it’s just because of sheer hardwork and relentless struggle of people like you, that democracy is prevailing and people are dying.

But that doesn’t matter because one day they are all going to die anyway. I wish I had more time and energy to thank you for taking up as much external and internal loans in merely 3 years that all the previous Governments had collectively taken in 66 years. What matters is that one stands first, be it from top of the list or bottom of the list. Love you for what you’ve done for Pakistan and its rivals simultaneously. SHERRRR!

Writer is a social and political activist, deeply interested in educational reform and also works as a management consultant; ideas expressed are totally her own, and not necessarily owned by this blog site