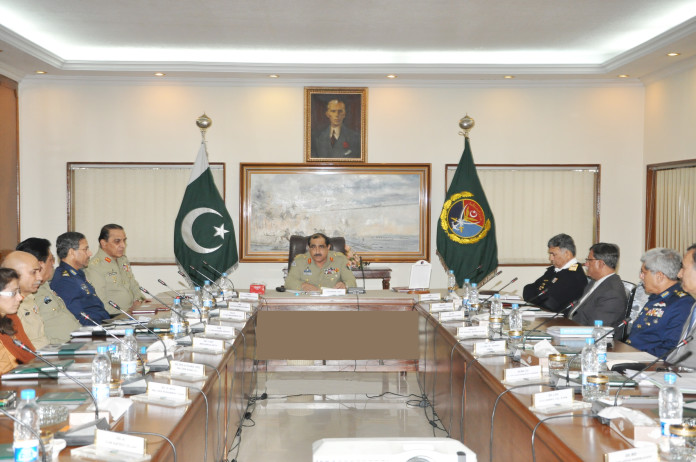 Hi! At a time when Pakistan’s foreign Secretary Salman Bashir was holding a press briefing on the Post-Osama Bin Laden Killing Issues, a select group of Pakistani media was invited to meet a few senior military and intelligence officials at an undisclosed location and this is what we learnt:

Was not finding and taking action against Osama Bin Laden an intelligence failure? Yes! strictly speaking it was, we never had an actionable intelligence on Osama Bin Laden. If we had, we would have acted first and it would added to our international prestige, bargaining ability and national security. However this failure needs to be understood in its context. Intelligence is not a black & white commodity that you have it or not. It comes and flows in from different directions and you have to develop it to make it actionable. We have taken lead in tracing and arresting more than 100 significant Al Qadea operatives and such arrests helped us and CIA to better unravel Al Qaeda. We have been chasing leads on OBL as well. Arrest of Faraj Al Libi in this area by ISI was the first link that later helped CIA a lot to develop this intelligence further. Such high level operatives of Al Qaeda never speak up immediately. Libbi volunteered little information in the beginning. As a practice and past understanding we handed over such foreign nationals (whose countries did not accept them) to the US Authorities ie CIA. It was much later, perhaps over a period of 2-3 years that Libbi provided information about OBL’s Courier to the Americans.

What about the area from OBL was finally tracked? We have been collecting leads from that area; these leads originated when we tracked telephone calls that originated in that area (not necessarily the OBL Compound) bound for Saudi Arabia in Arabic and mostly about financial transactions. We started to share that with CIA, the lead CIA talks of from August originated with us, however while CIA developed that intelligence into “Actionable Intelligence” it didn’t share its subsequent findings with us. Intelligence agencies do that to take full credit for achievements however penetrating our territory, taking action on our soil and then blaming us for somehow collusion with OBL are mere political point scoring rather than anything supported by evidence and is unfortunate. We have to admit that we don’t have the the kind of resources – like the satellite viewing and listening abilities- CIA has, and in the last few years CIA has deployed even greater human intelligence on ground as compared to us. The events of the last few years including Kerry Lugar Bill, the sequence of events that followed like the visa relaxations have played an important role in this new development and needs some reflection.

When we found out? we found out as soon as the guards at PMA Academy reported the firings, blasts and accident of a helicopter. But contrary to what has been reported PMA is basically a training school and not a military installation. Academy was closed after the passing out, PMA guards are not supposed to take care of events outside the academy. This OBL Compound which media has reported within 500-600 yards of the PMA is actually 4 Kilometers away (500-600 yards is the crow flight distance and is irrelevant). We first spent some time checking out if we had any helicopters in the area and we had none. At that point we suspected intruders and our first thought was of Americans, we alerted all strategic installations and the Air Force and PAF scrambled its jets. However could we have shot down the low flying helicopters? probably not since our best machines are F-16’s and we suspect that Americans would not send some thing into our territory that was easily detected by the electronics fitted onto our F-16’s. (many such assertions lead to lots of questioning and counter questioning but I am not going into that). Were our radars jammed? No, radar jamming is immediately detected, had they done that we would have been alerted because of the jamming, they used low flying and the broken down helicopter reveals improvised stealth technology (which probably no one has except the Americans, so Indians should forget about such fancy ideas- he did not say that, I am adding myself).

What about the 100, 000 or so Pakistani troops at the western borders? were they not supposed to take shots at the low flying helis? ..counter question: do you bother about every air craft that is flying overhead? border guards are not supposed to detect or take shots at the passing over air-traffic, it is the job of radar installations. If guards start shooting at the passing over helicopters then you will have a total mess. Americans knew of our radar installations, which are much smaller at the western frontier as compared to the east, since we don’t except intruders from the western frontiers. And since our radars are active rather than passive, it was easy for them to digitally map the terrain and then chart a flight path accordingly.American helicopters certainly came from Afghanistan, Americans have no helicopters at Gazi Borotha in Tarbela.

But could this intrusion into Abottabad means that our key installations are unprotected? actually there is no comparison between a residential compound containing 2-3 guards and few family members, which just happened close to a military school like PMA and a well defended military installation or a strategic asset with its own defense perimeter. Even if Indians want to cross over into our border, shoot a few fisherman or farmers in a desolate area, and then go back then they can do it. We can also do it, but that is not how States run their relations. No nation, including the United States protect every inch of its large territory from such sneak entry. Operation in Abottabad can be appreciated as intelligence operation and its marvel lies in the use of newly developed stealth technology, militarily speaking it was quite unimpressive; it was an undefended residential compound with two guards and a family living there. Any police force or militia could have done that. It was all about precise intelligence.

Was Obama there? given the family of OBL that includes three wives, and 13 kids the evidence emanating from them supports that he was there and it was in fact Osama Bin Laden who was taken away by the Americans. But how do we know that he was dead? well his wife who got injured in her leg reported that when she lost consciousness he was alive and was being taken into custody. However OBL’s daughter reports that Americans first arrested him and then suddenly shot him and then dragged him away. But the senior officer talking to us was unable to categorically confirm if Osama Bin Laden was in fact dead. Why? because his own information is either from the information released by the Americans or from the OBL’s family. And OBL’s daughter has only reported his father being shot and then dragged by the Americans for taking away. In fact we were told that Americans took away two men and one of them was OBL.(So was it OBL that was apparently thrown into the Arabian sea for fish? we have no option but to rely upon the credibility of CIA and President Obama, whereas CIA is a dubious case may be we can trust when Obama says so).

We found out that Mike Mullen called Gen. Kiyani, around 5am, Pak Time and said: “General, we got Osama Bin Laden, but he is dead” General Kiyani then congratulated him on this success, this much has already been reported but the officer who spoke with us disputed the context in which this conversation was reported by the US Media. Moving ahead, Kiyani then asked Mullen to announce it quickly, asap, so that confusion ends and asked him that Pakistan be acknowledged by President Obama for its role in leading upto OBL. Mullen affirmed. Earlier President Obama was supposed to speak few hours later, probably in the early US morning but as a result of the chat between Kiyani and Mullen, President Obama’s speech was first decided for 7.30am and finally appeared at 8.30am Pak time. And it was this speech in which Obama mentioned Pakistan’s role in leading to OBL. Why Pakistani military and intelligence not responding against this transgression into its territory? why not suspend all intelligence sharing and counter terrorism with the United States? after all for all practical purposes the Americans invaded the territory of an ally? …well is this for the military or intelligence to decide? or is it up to the government and the parliament to decide?

Note: There was more in this discussion, that related to why NCTA (National Counter Terrorism Agency) could not be formed? why Pakistan has not changed its criminal and prosecution laws since 9/11? amend what are the implications? some discussions that erupted in the question answer session about 450 visas issued in a day, in fact in a night, from Pakistan’s embassy in Washington without security clearance when President signed a letter to the Prime Minister and PM then signed that authority to Pakistan’s ambassador in Washington and how more than 7000 visas were issued since July of 2010 for various US persons working inside Pakistan. Why so many visas? apparently these persons come to work on various projects related to Kerry Lugar Bill, however we learnt that most who are associated with Regional Affairs Office are in fact working for CIA, similarly most who are assigned under “Security” are also affiliated with CIA, could this explain CIA’s increasing foot print inside Pakistan? certainly this is subject to a national debate..but I am sure you will find lots to read on all this in the morning papers of 6th May and do watch the 8pm and 10pm programs repeats on Pk Politics on internet to get diversity of views and perspectives on this since most Anchors were there.

Many had promised to tear down the officers before this meeting but the angry and loud opening debate soon turned into a point by point discussion, It was informative and sobering and most if not all concerns were addressed. To every question there was an answer. Was America denounced? absolutely not, in fact we were told that despite all difficulties it is a vital relationship. Was India discussed? not even once. So are we satisfied? No! all governments and state institutions have the right to inform, dis-inform and spin and it’s the aware citizenry’s responsibility to dissect what is told and we will continue to do that……it now belongs to you for tearing down… Good luck!