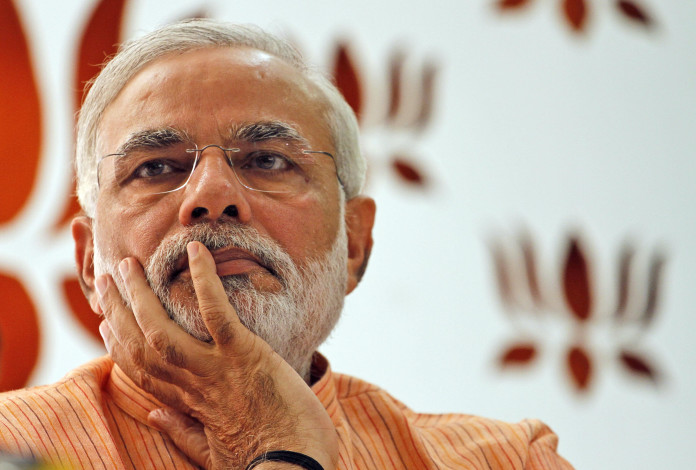 Why Modi sounded more confident than Nawaz? – Many factors are involved but two or three are more important. Modi knows that English is not his forte; Nawaz Sharif speaks much better English than Narendra Modi but at UNGA Nawaz could have fared much better for himself and Pakistan and his politics if he had decided to speak in Urdu – because he does not have as much skill with English language to be able to play with it, he cannot twist and twirl with it the way he can do it in Urdu which reduced him in UNGA to a monotonous reader of a script.

Nawaz speaks reasonably well when he is with his audience; he connects well with his voters in Punjab and his words sync with his inner self – even if he is twisting facts like all politicians do. Modi’s real edge was that he knew his weakness and decided to speak in Hindi which gave him the confidence and the freedom to maneuver with his words and thoughts and though he too had a written script, he could show independence of thought and belief, freedom from the written script, when he spoke with free gestures of his hands and at times he was even rhetorical in typical South Asian political style which was a bit much for the UN stage.

Why could Nawaz not decide to speak in Urdu and set a new standard and trend for Pakistani politicians to follow? – aferall heads of state of many countries speak at UN in their own languages? This is not only Nawaz’s failure; perhaps this is not his failure at all. Pakistani society has a huge inertia and mental block, a strange slavish attitude in that respect. Psychologically Pakistani elites have not been free from “British Colonial Subject Mindset”, they have not been able to understand distinct “identity” and its expression. This defines the failure of Pakistani politics.

If Nawaz and his advisers could not rid themselves of this “mental prison of being British slaves” then they are not alone; most Pakistani elite belong in that category. Most Indians also fall in that category – especially the rich superficial elite – but India also has a huge intellectual movement since the beginning of 20th century that has attempted creating its own identity and has left strong impressions on Indian mind, politics and psyche and that philosophy gives them a mental strength to deal with the world outside.

Indian rabid reaction in Devyani Khobragarde affair had that “identity” at play which many superficial Indians could not appreciate. Pakistan does not even have that philosophy, (read and hear Pakistani liberals arguments and you can feel a total absence of self-respect) so even if Nawaz would have felt or dreamt that may be I should speak in Urdu, all around him would have looked shocked as if he was committing a crime. But someone like Maryam Nawaz who sweats and struggles all the time on social media to defend “daddy” should have understood this point. This is principal reason why Nawaz could not express himself freely with hands, with body gestures and with the confidence he deserved at this stage.

Modi also appeared to have much more personal input to his speech. Nawaz read out a speech which was his country’s position; it did not appear if he believed in what he was saying or was interested. He was merely doing a duty. This was not because Foreign Office or Military told him what to say; institutions matter everywhere; this has to do with lack of personal interest in the kind of issues that matter at the interface of a state with the world outside. In contrast there were many aspects of Modi’s speech which must have been inserted by the Indian Foreign Office (you don’t need to know from inside; it was visible from outside) on Modi’s insistence because he wanted to say them, because he believes in them like India has its own way, its own philosophy and so on.

I am not suggesting that Modi invented them, these are part of the Indian foreign policy rhetoric but nevertheless Modi seems to believe in them; he has an attitude toward the world which Nawaz lacks. ZA Bhutto and Benazir and Musharraf and even Zia all had an attitude towards the world; ZAB was its most sophisticated expression but you cannot be a regional or international leader unless you have an attitude towards the world. Most Indian leaders who reach the top have that attitude- and Indian Foreign Office has that attitude even more than them. Most Pakistanis either don’t have that or they just cannot muster the courage to bring it out.

But Nawaz Sharif’s additional problem is his relation of fear and hatred with his military and a continuous mental battle to subdue military without which he feels insecure. He did not need these battles; he was very strong by the end of last year; he could have worked with all sides but in over projection of power to buy total and perpetual security he has weakened himself considerably. Present political crisis started from this insecurity. Imagine the fear of walking alone on a dark cold street in a December night. This emotion has consumed him in such a way that he is perhaps ready to get help from Washington or even India to tame his own military. Recent crisis has even added his real opposition like Imran Khan to that list of enemies who have to be defeated with help from outside. Repeated signals of support from Washington during the recent political crisis has exposed that dependence.

It’s only natural that he has to give out something in return to get support from outside. This defines his weakness on the international stage and total inability to deal with the interface of state with the world. Modi derives strength from inside India, Nawaz is dependent on support from outside. Nawaz desperately needs to fix his house; his real opposition inside has to stand by him; this is possible with political concessions; he can still emerge strong for the remaining period of his term (with early elections) by political engagement. Otherwise he will continue to get weaker and weaker. Washington and Punjab Police both will not be able to make him strong. Political process will.