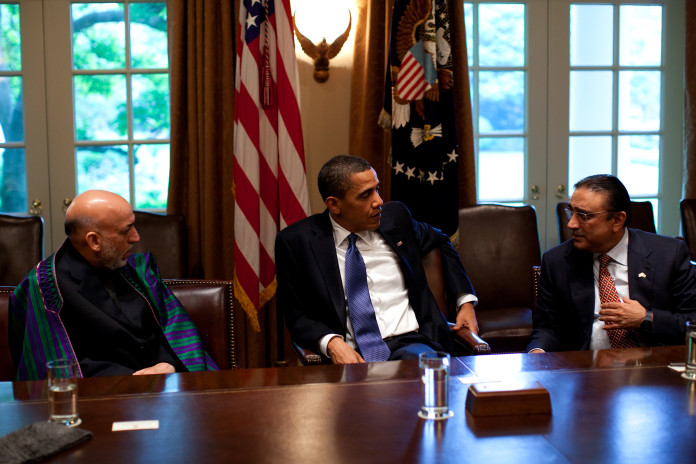 The emerging political structure in Pakistan may present new challenges to both the US and Pakistani diplomacy in the region. And it will be interesting to see how both sides continue to strengthen a relationship that is of utmost importance — to them and the region at large.

Last week the visiting US Deputy Secretary of State, John Negroponte and US Assistant Secretary of State, Richard Boucher had a taste of this new noisy, boisterous and less than deferential Pakistan, where many were prepared to raise questions never aired so audaciously before. In many respects it was a rougher microcosm of the neighbouring India where the Bush administration has found it so frustrating to sell its grand nuclear deal.

But while listening to the cacophony of political bravado the thing that must have worried the US diplomats the most was that there was no one single person or institution available anymore to be threatened with mid-night phone calls; that can negotiate, promise and guarantee the results on the continuing war against terrorism. In a report, the New York Times termed this as the ushering of a ‘new diplomatic order’ and later in an editorial termed the Pakistani leaders desire to review Pakistan’s role in the war against terrorism as ‘worrying’.

In an earlier column in these pages (Where exactly lie the next fault lines? KT, Mar 20) I had argued that soon the coalition parties may be compelled to take different positions on this issue. This started to manifest last week. Whereas PM Yousaf Raza Gillani’s cautious pronouncement that negotiations are possible with militants who lay down arms has raised eyebrows in the US media it must be the stand taken by Nawaz Sharif, the former prime minister, and the junior partner in the coalition government that must raise hackles inside the State Department.

Nawaz, in a hurriedly called Press conference, after his meeting with the US diplomats, asserted that whereas his party wants peace everywhere it doesn’t want Pakistan to become a slaughter house for peace elsewhere. Yet the differences between the two coalition partners on this issue may be deeper than discernable from the surface. PPP created political space for itself inside Washington beltway, over a two-year period, promising that if given the chance back in power it will impart greater legitimacy and effectiveness to the war against terrorism.

This was the position again reiterated by Hussain Haqqani, the PPP’s designated Ambassador at large and soon to be Pakistan’s Ambassador to Washington-during an interview with Los Angeles Times. It will be hardly an exaggeration to suggest that Haqqani was Ms. Bhutto’s principal one- man think-tank in the US providing continuous intellectual wherewithal to her strategy of winning and developing support for a comeback. Sharif on the other hand is being counselled by Tariq Fatemi, a nationalist figure from Pakistan’s Foreign Service whom many in the US diplomatic corps remember with some trepidation.

Add to this the fact that whereas PPP has relied upon its traditional vote bank in interior Sindh and southern Punjab, Sharif, who swept Punjab and its middle class vote, upstaging Gen. Musharraf and his support base, had fashioned his campaign around issues of national self-respect and sovereignty. Given this context both parties will find it difficult to move far away from their commitments and public image.

But this is not the only problem that challenges the minds.

Responding to the changed signals — or confusion — from the politicians, the so-called Tehrik-e-Taleban-e-Pakistan (TTP) the main extremist outfit has produced its own olive branch. And the nature of this “olive branch” only shows the kind of disconnect these neo-Luddites have with the world around them; they are prepared to offer peace to Pakistani cities in exchange for their right to continue Jihad against the US and Nato in Afghanistan. Well, this may entice some idiotic street opinion but is hardly helpful to the political decision makers- who will soon be confronted with the task of balancing budgets as well.

But these militants, lost in time warp, with their vision blocked by the rugged mountains all around, are trying to utilise some redundant paradigms of the past.

After all only a generation ago they and their fathers were utilised by the US and Pakistanis to wage a war of attrition against the occupying Soviets from sanctuaries inside Pakistan. The US certainly utilised this concept against the Soviet-backed regimes in many other theatres of conflict, across the world. India successfully employed the same paradigm against erstwhile East Pakistan by allowing the Begali insurgents to operate from the safety of West Bengal. And Pakistan — till 9/11 — was following the same against India in Kashmir. We must admit: all are naked in this Turkish hammam.

9/11 gave us the new paradigms of collective security where all were prepared to fight a common enemy — the terrorists- under the leadership of a global hegemon, with whom no one could reasonably disagree with. The assumption is that old fashioned pursuit of state interests is dead. But is it really true?

US media and think-tanks have continuously harped on the theme that Pakistani military establishment is playing a double game, saving some of its “jihadi assets” to be used later. Interestingly the Pakistani chatter mill has always pointed out the large number of Indian consulates close to Pak-Afghan border, foreign inspired insurgents in Baluchistan and activities of Indian Border Road Organization as evidences of a US double game in the region.

But Mirza Aslam Baig, the former army chief, recently wrote and distributed an unusually provocative piece: “Challenges for the new Government” accusing US and India of running an intelligence command operation at Jabul-us-Seraj, north of Kabul with forward posts at Sarobi for missions inside the NWFP and at Lashkargah and Nawah for supporting insurgents inside Pakistani Baluchistan.

These accusations look wild on the face of it and in all probability may be exaggerated; after all why will the US attempt destabilising a nuclear Pakistan? But unfortunately such conspiracy theories are widely believed across Pakistan. And one thing they point out is that the old fashioned pursuit of state interests and insecurities is not dead.

In the months ahead, US may find it better and more fruitful to define the struggle in this region less in terms of the war against terrorism and more in terms of regional stability. In any case, it may need to inspire greater trust about its role of a neutral, above board, global hegemon.