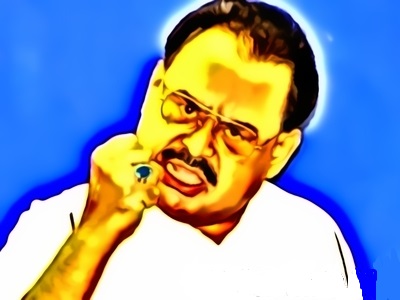 Altaf Hussain’s incitement to violence and exhortation to attack media channels has many dimensions and while he may look like acting in sheer frustration, its quite possible that he is acting on being prompted from some quarters – and ‘hunger strike of MQM workers’ was a convenient stage set for inciting something big. Govt of Prime Minister Nawaz Sharif, Interior Ministry and Foreign Office need to quickly and carefully analyze the building scenario; they need to take several important decisions but some initial steps may greatly help and one of them is talking to UK Govt about Altaf Hussain’s political activities from London.

Unexpected political situation in Indian occupied Kashmir, with its unending array of disturbing audio and video images flowing onto international media from Al Jazeera to BBC- thousands demonstrating, chanting slogans against India, burning Indian flags and unfurling Pakistani flags, Indian CRPF firing on unarmed protesters and photos of poke marked faces disfigured and blinded by pellet firing by security apparatus – has suddenly thrown up new challenges for Modi government in Delhi. One major imperative for Modi government is to show to the people in India and to the world all over is that Pakistan – that supports Kashmiri resistance – is itself beset by violent insurgencies, religious and ethnic terrorism and political schisms of all sorts.

To politically naive this may look either far fetched or immoral depending upon levels of information and which side one belongs to. For instance to most Indians and western media and diplomats that see India through a very sympathetic and sadly ‘unrealistic lens’ this may look like yet another ‘conspiracy theory’ and to most Pakistanis this is yet another proof of ‘Indian vileness or Modi’s immorality’. Both are unjustified. From a realpolitik perspective, whatever India may do in Kashmir for long term solution is different from its immediate needs. What it needs immediately is: pacification of the crowds in Srinagar and adjacent areas.

Though Indian government fully understands that its ongoing, latest challenge with Kashmiri youth has less to do with Pakistani efforts and more to do with indigenous factors, but it is also an undeniable fact that Kashmiris derive ‘psychological strength and hope’ from Pakistan across the border. So putting an end to their hopes is important. Importing internally and exporting worldwide images of a Pakistan ridden with chaos, bleeding from its multiple wounds, confused and directionless, struggling on its knees, is the best way for Modi government to deflate, demoralize and defeat the hopes of Kashmiri youth. And there is nothing new about it; Indian government agencies and several sections of media aligned – even apparently serious sounding news channels – with state agencies routinely run these kinds of trailers on Pakistan; at times when nothing is happening in Pakistan, they invent imagery from films, documentaries and through rehash of old footages.

Pakistan thus – at the receiving end of this Offense/Defense paradigm created by Ajit Doval – has a very tough situation at hand. Despite its elevated rhetoric it can do little to trouble or help India in Kashmir. Given the grim human situation – to which Indians are unable to find any solution due to the polarization of their own mainstream politics and its massive swing to the right – Pakistanis can’t keep their mouths shut, though admittedly Nawaz Govt only took a bit of a tiny weeny position when worsening Kashmir situation and reactions of Pakistani media forced its hand. So million dollar question is: how to respond to the kind of situation India has created for it in Karachi after Quetta.

Many parts of  Baluchistan are disturbed, nationalistic feelings ran high in these few districts even before the killing of Nawab Akbar Bugti, after all he was leading a kind of rebellion from hills on the issue of gas spoils. Though, admittedly his struggle was mainly focused on issues of royalty from Sui. But such feelings of anger and alienation multiplied after his tragic death about which fiercely opposing narratives exist. But these nationalistic aspirations and mini-insurgencies have gradually weakened since 2009/10 thorough determined intelligence lead operations by Frontier Fonstabulary (FC). In the last 18 months, insurgency has literally been defeated; with the death or disappearance of Dr. Allah Nazar (in all probability killed in intelligence lead operations)  the Robin Hood character, who had sustained an impression of ‘something real’ through his charismatic leadership. The recent arrest of RAW saboteur, Kulbhashan Yadav – who had been visiting from Iran and maintaining liaison with insurgent groups to organize their activities for the past several years – only happened because local network and support systems of Baluch groups had significantly weakened.

The specter of unrest in Baluchistan is now being continued purely through terrorist attacks against soft targets. The recent attack claimed by Jammat al Ahrar, despite its savagery is continuation of the same strategy. Sources inside Baluchistan inform that only remnants of TTP – now in refuge inside Afghanistan – have reservoir capacity to create suicide bombers. TTP factions are being supported through a complex financial and strategic relationship between NDS and RAW. (reportedly RAW Afghanistan budget in the last financial year was around Indian Rs. 400 crore; INR 4 Billion) However suicide bombers TTP produces are being traded like market products. So what carries the impression of an ‘ideological struggle’ to many in western media is essentially a commercial market thriving on violence. Traders of suicide bombers- unlike the Palestinian pattern against Israel before 9/11- are seldom willing to sacrifice or risk their own precious lives for the cause, whatever it may be. LEJ that holds the ground inside Baluchistan buys ‘suicide bombers’ as if these are toyota jeeps. TTP factions are the suppliers of human wares and LEJ is the executioner of violence.

But despite ongoing Indian needs and attempts, Baluchistan will not offer much. Its schisms are self-contained and its not urban. Unlike Kashmir and unlike Karachi. Its Karachi where India can play havoc. And Altaf Hussain’s speech inciting violence against Rangers and media, and exhorting slogans against Pakistan can meet the requirements of Modi government. (Remember Kashmiri youth cry anti-India slogans and burn Indian flags; what could be more sweeter revenge projected through Indian and international tv screens?)

Altaf Hussain’s incitement to violence – coming atop of a hurriedly conceived hunger strike of MQM workers over the past few days – couldn’t achieve as much today (22nd Aug) as it would have if MQM’s militant gangs had not been severally bruised and weakened in a sustained 33 month long Rangers operation. Had MQM militancy been intact, Karachi in a matter of hours would have spiraled into mayhem and chaos. But there is no room for complacency. Altaf Hussain represents a cult; he sits atop a mountain of ethnic grievances nursed and multiplied over decades of Sindhi – Mohajir divide. Whatever was triggered today has scope to take different forms. Civil-military divide in Sindh and in centre provides abundant fault lines for all kinds of outside influences to play havoc. Without a broad political unity – that may not be easy to achieve and sustain – an effective counterstrategy to defeat what clearly smells like ‘Modi/Doval’ enterprise will be  difficult.

Pakistan in the end has to talk to India. These talks may be very different than the kind of fancy, ceremonial, media glitzy talks world imagines. These talks, serious and substantive, may be between RAW & ISI, behind the scenes have to be around a genuine ‘quid pro quo’. Both countries need to address their real concerns. Pakistan needs to understand how can it help India without jeopardizing its national security. But India may not be ready for anything ‘substantive’ for despite its endless propaganda and crying designed to woe west, it has nothing serious to fear from Pakistan; it considers itself – thanks to the Indo-US nexus against China – on the winning side of history – a feeling continuously multiplying since 9/11. And India wants more; it wants to push things around as much as it can without any genuine quid-pro quo. But if talks around a table, or a forlorn secret island somewhere in the world did not work, then Pakistan will have no option but to return Modi/Doval in the same language they understand.

But all these imaginative scenarios can wait; first thing is to secure Karachi. Nawaz Govt now needs to talk seriously with British government, with all legal home work, with evidence of audio tapes and transcripts. It immediately needs to hire the best legal firms in London to arm its foreign office with a plausible international case against British citizen, Altaf Hussain; a case that will show that what Altaf Hussain is doing – running politics of agitation and hatred – from British soil is not permissible under UK’s international obligations – not after the plethora of laws westminster made since 9/11. Ministries and their babus in Islamabad & wizards in GHQ can provide pieces of evidence but they are strongly advised not to over estimate their legal and moral arguments or their cerebral skills; let this tricky job be done by a London Law Firm. Let London gag and force Altaf Hussain to where he now belongs: sick bed. Let Karachi and its politics move on.