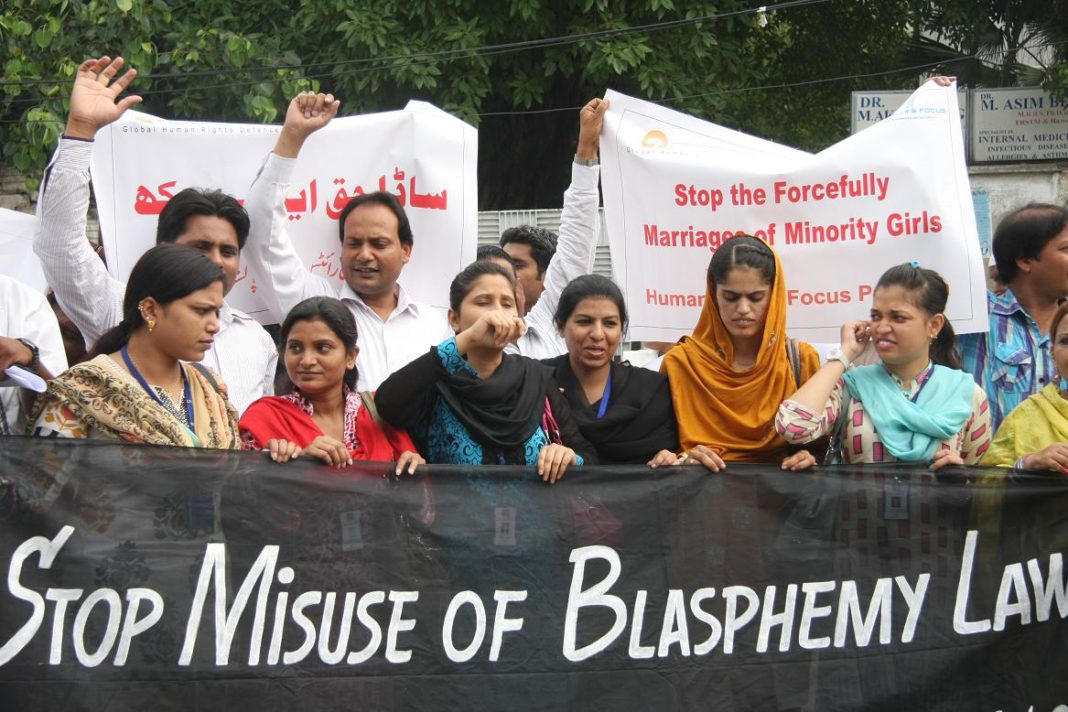 How could two be related? Blasphemy Laws and Woman Protection Act? These two pieces of legislation look so different. How on earth some one in right mind can find a relation between these two. And yet this is where real catch lies.

When mullahs and religious parties, in Gen. Zia’s reign of horror, demanded to add ‘strict punishments’ to the British era ‘blasphemy laws’ their argument was simple: Pakistan is a land for Muslims, and no one should be allowed, encouraged or tolerated in anyway to insult Islam, or its Prophet (PBUH).

Gen. Zia had a faustian bargain, an evil pact with the religious parties and conservative sections of the society – especially in Punjab. He derived his political strength from this arrangement. Any one familiar with history of this country will remember the ‘Majlis – e- Shura’ and its initial office holders, power wielders, most of whom later on became important politicians of Nawaz Sharif’s Muslim league. Gen. Zia’s government never set up an Official Commission of Enquiry or any enquiry whatsoever – at least using his structure of Deputy Commissioners and District Police Officers – to determine if there is any real problem of people, Muslims or non-Muslims insulting Islam or Prophet (PBUH) in public places. No one in government raised the question: Do we really need a law like this? Do we have a challenge at hand? What is the scope or magnitude? What will be the unintended consequences.

Now fast forward. If religious parties & mullahs were giving legitimacy to Gen. Zia’s regime, today PMLN government is deriving ‘international legitimacy’ by towing the line of western funded NGO’s. Zia needed ‘mullahs’; Nawaz Sharif needs ‘NGO’s’. In Zia’s Pakistan, power was still being derived from ‘inside’. Relations with the international system were still on the basis of ‘state to state reciprocity’. He could get away with his ‘internal faustian bargains’. In today’s Pakistan, governments cannot function, rule effectively or rule at all without ‘external props, supports, and approvals’. Western funded NGO’s, their approval certificates thus become important. Punjab Woman Protection Act & Politics of NGO’s & Religion? Result is same: Governments end up ignoring real interests of the public, the state and the society.

We in Pakistan in 1980’s didn’t need ‘New Blasphemy Laws’ or stringent additions to the existing ones. British had left us a basic structure of such laws. Only because they felt that in a multi-religious society that in early 20th century consisted of Hindus, Muslims, Sikhs, Christians and so on; and occasional disparaging comments, by one religious side – one irresponsible person or mischievous character – against the other, can lead to communal disharmony. They wanted to give something to the Police and Deputy Commissioners in districts to reprimand the careless or the trouble maker. But such British era law consisted of small fines and light punishments. Purpose was to improve governance. They only wanted to create a moral deterrence. Such laws were seldom used.

But Pakistani religious parties and mullahs in 1980’s were not interested in improved governance. For them enforcing such laws was part of ‘political empowerment’, of taking control of society and politics, to shift the balance of popular support to the right. In certain cases, it was also to improve their fundings from external sources in middle east. In 2016, ‘foreign funded NGOs’ have to show performance to their donors. A demonstrated ability to force governments to make new laws, that look or sound liberal, that align with the overall ‘donor agendas’  adds to their budgets and to their power. It makes them effective. Its not about ‘public interest’; its about ‘power’

I used to do a program from London in 2005. I once took Qazi Hussain Ahmed on line. During discussion I pointed out that these stringent ‘Blasphemy laws’ were not needed. These are being abused. He agreed that these are being abused and something needs to be done. But he argued that laws in itself are not providing for abuse. Laws are only to preserve public harmony; to prevent Muslims from venting their emotions in public, to prevent violence. There was no intention to kill, hurt, burn or arrest innocent men and women; there was no intention of a witch hunt against the minorities- he went on. I was in London, we kept sparring; I could afford to disagree.

Laws are always abused. Implementation of a law seldom follows the spirit or intention of its framers or legislators. But legislators can never be excused for making laws that have potential for disastrous abuse or great mischief. They cannot turn around and say: we didn’t want to do this; we did not know this could happen; this was not our intention. Law makers – if they are genuine law makers, working in public interest have to weigh the ‘positive impact’ versus the ‘negative outfall’. It was perhaps Jeremy Bentham, who in late 19th century established the principles of ‘Utilitarianism’. Simply put: worth of every public act or decision has to be measured against its overall utility.

Did religious parties, mullahs and framers of the stringent blasphemy laws of Pakistan in 1980’s realize that within next 25 years, thousands of innocent people will be harassed, hounded, arrested and will be made to languish endlessly behind bars. Did they know that dozens will be killed or maimed, families destroyed and public harmony which they intended to preserve will be ruined. Was it their plan to tarnish Pakistan and Pakistanis world over? Did they imagine that such laws and their use will massively increase political and societal polarizations? Did they imagine awkward situations, international pressures, the kind of which took Salman Taseer to visit Aasiya Bibi in jail? the first ever murder of a ruling Governor of Punjab by his body guard who had sworn to protect him?

No they didn’t. Despite all their stupidities, their faustian bargains and shortsighted political interests we cannot blame them for a ‘grand conspiracy’. For what followed was an unmitigated disaster; something which we still live on with. It was their failure of imagination. Not only their’s but also of the bureaucracy; our educated babus, from Oxford and Cambridge, also failed to anticipate the consequences. May be some of them wondered or discussed in their offices but no one has penned down his or her fears of the disaster that was in making.

And now we have the NGO’s. Western funded NGO’s. Our modern day equivalents of philosophers and intellectuals or academics. Are they planning a ‘grand conspiracy’? against society or family? No, sir, they too are incapable of planning anything grand. Their interests are narrow and short lived. Like religious parties in 1980’s they too are for ‘power trip’; they too don’t understand or visualize the long term consequences of their actions on ‘family’ and society. The only difference is that they are coming from the opposite direction. Mullahs abused religion for ’empowerment’; NGOs are using ‘liberal slogans’, anything that syncs with the western imagination to show performance, to create impact. Anything that helps to increase budgets.Punjab Woman Protection Act & Politics of NGO’s & Religion?

Persuading governments to make new liberal sounding laws is the best strategy to impress upon the donors. To persuade governments, to win public approval, to sensitize an unaware citizenry on an issue they write reports, collect data and project figures – all of which can be highly dubious. If today they sense that a major donor wants to raise the issue of rights of  ‘gay and lesbian’ in Pakistan, they will come up with a report with data to prove that 50% if not  more men in Punjab or Pakistan are gay, but were unable to express themselves because of the fear of mullahs or ISI or military or something like that.

But there is no ‘grand conspiracy’. Its about naked ambition, lack of understanding, power grab and dollars. And yes, one thing more: hatred of religion and conventional society. Combined with all these traits, these NGO’s – like mullahs in 1980’s – have embarked on ‘self profiting missions’ of whose consequence they are not aware. And they don’t care. Men who have affairs with ‘wives of others’ always suspect their own wives; they are always very worried for their ‘daughters’ too. Women who had suffered violence or abuse or had particularly difficult relationships generalize that to all men and society. Its the only way they feel vindicated; for if every ‘woman’ is not a victim of ‘man’ then may be something was wrong with their own ‘biochemistry’. Much damage has already been done by the way issue has been presented with its ‘binary overtones’; Man vs Woman. Given the superficial commentary, most women are bound to feel that law empowers them; most men will be afraid of entering a rational debate, for a man who is against the NGO driven law is essentially against women. In my earlier blog,  Punjab Woman Protection Act & Politics of NGO’s & Religion?I had explained the sheer stupidity of seeing ‘Man vs Woman’ as a binary relationship. Men are not only husbands and boy friends but are also fathers, brothers and sons.

Lets sum up. Framers of stringent blasphemy laws of 1980’s did not, could not understand the mischief inherent in what they were putting on statute. They, without realizing, provided a tool to thousands of people for settling their base emotions, their financial rivalries, their personal animosities in the name of religion. Their failure of imagination lead to systemized witch hunt of weak, poor and minorities and debased our religion; today forget about the wider world, its difficult to explain to ourselves, to our children, that we are not evil as people; what happened was bad politics. Read my 2008 piece from Daily Times:  View: Murder, media and intolerance : Moeed Pirzada about how a Muslim mob lynched a helpless Hindu factory worker. Today western funded NGO’s have created a ‘bad law’; it may look harmless or beneficial to its proponents like blasphemy laws of Zia era looked then to the mullahs but it will, in due time, lead to the destruction of ‘family’ as we understand it. Blasphemy laws provided a ‘destructive tool’ to settle emotional scores within the ‘local communities’ this ‘Woman Protection Law’ will become a tool to settle emotional scores within families. People have shamelessly lied and fabricated ‘accusations of blasphemy’ to punish their enemies within village and mohallas. View: Murder, media and intolerance : Moeed Pirzada. Angry interactions, and hurt emotions within families will lead to ‘for profit interventions’ by planet’s most corrupt state functionaries.

But who will suffer? Why do you think the Punjabi MPA’s have faithfully passed the law, without any debate, not even of a day? Because powerful men – and powerful women, the politically connected ‘mothers in law’ – fully realize that they operate above the law. I am amused when I find that a most powerful ‘Punjabi Politician’ with several cases and FIR’s of murder pending against him becomes the champion of ‘Law against Violence’. There are others whose kin and kith have been accused of abductions and rapes. And there are those who have several wives and mistresses, comfortably placed in different houses, in different cities and sometimes different parts of the world. They all know that if laws and police cannot reach them for ‘murder and rape’ and to ask about ‘Panama Papers’ then which ‘Woman District Officer’ or SHO is going to enter their homes. Like the ‘Zia’s blasphemy laws’ it will be the poor, weak and dispossessed sections of society where ‘corrupt minions of state machinery’ will barge in looking for opportunities to profit. It is time for common citizens – both men and women – to open their eyes and assess that how they are being taken for a ride – a disastrous ride.