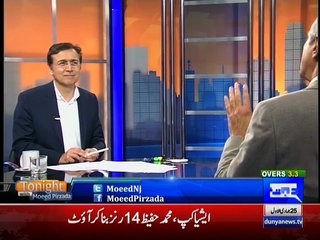 Dr Moeed Pirzada critically discussed and raised important questions in front of Jahangir Khan Tareen who is contesting as Secretary General of Pakistan Tehreek-e-Insaf in its Second Intra Party Elections. PTI will celebrate party’s Foundation Day on April 25, 2016 as it will complete 20 years of political struggle. Jahangir Khan Tareen said that intra-party elections are a proud of PTI and we will onboard all the groups for the betterment of the party. He said that Imran Khan had introduced a new political culture in the country in order to involve youth and women in active politics. He declared that he would congratulate his opponent if he would win the intra-party election and expected the same from him. On the occasion he thanked the party leadership for trusting upon his abilities and skills for making PTI more popular among the masses.