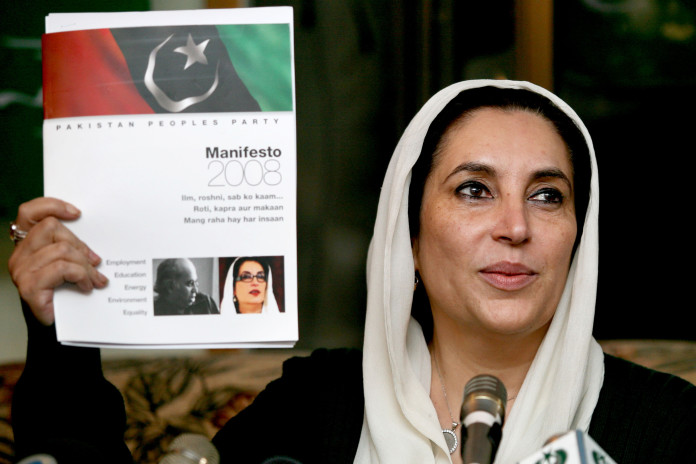 The rot may have been brewing for a while. The natural thought, “what will I get?” must have dominated many minds from the moment they descended upon Naudero and Gari Khuda Baksh to bury the last of the ‘real Bhuttos’. But in recent days the first shot was fired by PPP Senator Dr Babar Awan who issued a statement that no one but the party co-chairman, Asif Ali Zardari, was the right person to be nominated as PPP candidate for prime ministerial slot after the elections.

The good senator was obviously testing the waters for Zardari. It then transpired, from newspapers, that party’s top most leadership has rebuked Awan for giving such a statement in violation of the party’s considered position that such a decision will be taken after the elections. Many wondered: “who is this top leadership?” Fortunately the confusion did not last long.

PPP senior vice chairman, Makhdoom Amin Fahim, emerged on the scene terming Senator Awan’s statements his personal opinions and clarified that only party’s Central Executive Committee (CEC) has the authority to decide upon the matter — and that too after the elections. Perhaps to add authority to his voice he claimed that he and   Asif Ali Zardari were in complete cohesion over the issue.

Makhdoom of Hala might have regretted his words. For soon afterwards   Zardari, while talking to the US publication Newsweek, made it clear that he is seriously considering himself for the prime ministerial slot, for he has the “widest name recognition in the party” and “no senior leader apart from him spent eleven years in jail”. Under his directions a copy of the will of Benazir Bhutto was made public to prove, once again, that she had nominated him, and no one else but him, as the acting chairman of the party.

This is now the third time that PPP under   Zardari changed its position on the subject: First on 30th December, three days after Ms. Bhutto’s assassination,   Zardari had clearly indicated that Makhdoom Amin Fahim, who always lead PPP, in Benazir’s absence, would be the party’s candidate for the prime ministerial slot. A few days later this position was reversed announcing that CEC will decide this after the elections. This in itself was an indication of the growing fault lines.

However, now with Senator Awan’s premonitions,   Zardari’s interview in Newsweek followed with the dramatic release of the Bhutto’s ‘political will’ it is abundantly clear that Benazir’s widower is making his moves towards the top slot-albeit cautiously, inch by inch, to make it more palatable. Even in the Newsweek interview he said that he might or might not be the prime ministerial candidate. And since then he has again tried distancing his person from the idea- he has planted himself.

Since Benazir’s assassination,   Zardari has not only benefited from a natural wave of sympathy inside Sindh but several of his actions have generated a national goodwill and expanded his political space: his voice of reason and restraint at a time of great commotion in Sindh; his ability to defend the federation; his better command on the use and nuance of Urdu language and his indicating that Makhdoom Amin will be the party’s nominee for the prime ministerial slot all contributed to that.

Yet his, all too visible, desire to become the prime ministerial candidate is something he should better stay away from, in the best interests of his party, country and his family. And there are certain good reasons for that.

Zardari may not be that villainous character many in the media and the government agencies paint him into. Some of those who have interacted with him on an intimate level vouch that he is as normal or unprincipled as any other in Pakistan’s power structure. Yet someone, like him, rooted in reality might be painfully aware of the negative baggage, rightly or wrongly, he carries in Pakistan’s collective consciousness. The attempts of his lawyers and lobbyists to either defend him on the grounds that nothing has been proved or by drawing parallels with the misdeeds of other politicians, bureaucrats and generals will fail to make any significant dent in the overall collective perception, at least not in the short run.

Whatever he may do, in immediate future he will continue to be a divisive figure, especially outside Sindh. And both People’s Party and Pakistan, at this hour, need a less polarised, and a uniting figure.

Also, there is a limit to which this “will business” can be pushed; and for two reasons: One, even if it is 100 per cent original many will continue to doubt it for the simple reason that Benazir Bhutto had meticulously kept her husband out of immediate political arena in her last few months and her sudden change of heart on 16th October 2007, making her beloved husband the net beneficiary of her legacy – though analytically correct — continues to look far more dramatic than most people can digest.

But even if all this is ignored, this “will business” has serious limitations in the long run. Pakistan People Party may not be a party in the western sense of it, but it deserves to be at least comparable to a better managed Private Limited Company.

This “will business” belongs to private assets and properties and even there exist examples of private concerns where managers or long time associates end up inheriting the mantle of leadership over incompetent off springs. And PPP, in all fairness, is endowed with a range of competent persons.

Despite this, we must admit that today Asif Ali Zardari has been given a role by history; he is someone who can provide internal unity to PPP; by keeping it together he can help it to emerge as the most powerful political force in the aftermath of the elections; can wield tremendous influence for himself, his son and for people of Sindh and may end up developing a new profile for himself in his own role rather than the borrowed sheen of his slain wife.

But all of it will have a chance of possibility if he demonstrates the maturity of putting his good will and organisational abilities behind a ‘consensus candidate’; in other words: if he decides to become Sonia Gandhi of Pakistan.