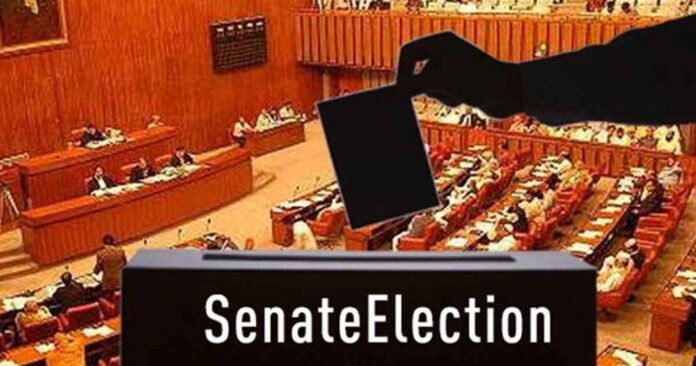 PM Imran Khan and ruling PTI are trying to establish the principle that senate elections – due in March – should be held through an open transparent ballot; instead of the secret vote as mandated by the constitution. This now represents the latest chapter in the never-ending tug of war between the government and its myriad opposition – and becomes important because the PDM movement, on the streets, appears to have stalled bringing all political focus back into the parliament.

In December, the government had moved a reference in the Supreme Court of Pakistan seeking the apex body’s advice on the issue. The court started hearing the reference in the first week of January 2021, and sought replies and opinions from a wide body of stakeholders including all political parties, provincial governments and state institutions like the Election Commission of Pakistan.

In the last week of January, the Khan government suddenly announced that it will now introduce a bill in the parliament seeking a constitutional amendment to provide for an open transparent ballot. Apparently, the government fears that the supreme court will not grant its request and will advise the matter to be decided in the parliament – as the opposition parties had been arguing from the very beginning.

However, PTI members keep reminding the PML-N and PPP leaders on tv shows that both these parties (PPP and PML-N) had themselves agreed, in the famous “Charter of Democracy” in 2006, that Senate elections should be through open ballot – but in the ten years of PPP and PML-N rule (2008-2018), they never introduced a bill in the parliament to give this commitment an effect.

Why the Pakistani political system ended up with a senate as an upper chamber of a bicameral parliament is not clear. This was certainly not on the minds of its earlier political thinkers be it civil dictators or the military interventionists. When the Second Constituent Assembly, convened in May 1955, framed and passed the first constitution of Pakistan in February 1956, it provided for a parliamentary form of government with a unicameral legislature – unlike India where Nehru and Ambedkar’s first constitution established Rajya Sabha as the upper chamber of a bicameral parliament in 1952.

The 1970 Assembly framed the 1973 Constitution which was unanimously passed on 12 April and promulgated on 14 August 1973. This 1973 Constitution that has often been referred to as Bhutto’s great achievement in Pakistani politics, again provided for a parliamentary form of Government – but this time with a bicameral legislature, comprising of the National Assembly and the Senate.

In the new scheme of things the Senate – also compared with the House of Lords in the UK – was given a permanent character; unlike the National Assembly of Pakistan that can be dissolved on the advice of the Prime Minister, Senate – as per Pakistan’s constitution – cannot be dissolved. Bhutto may have thought this as a bulwark against possible military interventions – history soon proved him wrong.

But this perhaps explains Senate’s mystique in Pakistani politics and in media discussions where it is often referred to as a “permanent structure”. However, this “permanence theory” was severely tested in July 1977 when Gen. Zia overthrew Bhutto’s second government; both National Assembly and Senate were sent packing. On 24 December 1981, under Presidential Order (P.O.15 of 1981), a Federal Council (Majlis-e-Shoora) was constituted by the president. Its members were nominated by the president.

The first session of this Council was held on 11 January 1982. This so-called “Federal Council” of Gen. Zia became the precursor of Senate after the 1985 party-less elections. The constitutional romanticism of “Senate being a continuous structure” was perhaps given credence by Gen. Musharraf who – after the Oct 1999 coup against second Nawaz government – did not abolish the Senate.

After the Twenty-Fifth Amendment, the number of seats in the Senate was reduced to 96, as the seats for FATA were removed after its merger with KPK. The fundamental sense of Senate being an upper chamber where all provinces – irrespective of their population size – have an equal representation stays. This is often compared to the US political system where even the largest states like New York and California, have only two senators like Idaho or Kentucky. But similarities end here because, in the US, senators are often hugely popular figures of their communities and are directly elected by the people (since the early 20th century).

In Pakistan, an electoral college that consists of the combined numbers of the National Assembly and the provincial assemblies elects senators indirectly. And this is where the problem lies. Since smaller provinces like Baluchistan and Khyber Pakhtunkhwa have equal representation in the Senate, the votes cast by the MPAs from these provinces become disproportionately important or perhaps crucial in the process. Vote trading may have gradually started in the early 1990s, but by 2008 it had assumed the form of an open market – where MPAs sell votes like shares in a stock exchange.

In April 2018, Imran Khan, then an opposition leader, expelled almost 20 MPAs of his provincial party (PTI) that ruled Khyber Pakhtunkhwa – after an enquiry that allegedly revealed that these 20 MPAs had voted, in the Senate elections of March 2018, against party’s directions. PTI had not obtained as many senate seats as were expected on the strength of its numbers in the provincial assembly and it was assumed – on good reasoning – that the dissenting MPAs had betrayed the party after selling their votes.

It is believed that buyers were PPP of Asif Ali Zardari and the payments were made through a business tycoon who faithfully kept video recordings of these clandestine cash transactions for later use. Khan’s decision was smart. General elections were to be held in July of 2018 – and interim set up was expected in May. PTI scored a huge moral victory, established a principle without much of a risk. But a moral principle was nevertheless established that vote for the senate – held in secret as per the constitution – should be open and transparent, perhaps through a show of hands.

It was in this background that the Attorney General of Pakistan, Khalid Jawed Khan, had on Dec 23, 2020, moved the 11-page reference under Article 186 of the Constitution relating to the advisory jurisdiction of the Supreme Court – on the question of “open vote”.

The president had sought the court’s advice on whether the condition of the secret ballot under Article 226 of the Constitution applied to the Senate elections. This reference was filed soon after the cabinet’s decision to hold the elections for 52 senate seats that will fall vacant, following the retirement of some senators from the 104-member upper house of parliament on March 11, 2021.

The cabinet had on Dec 15 decided to hold the Senate elections in February and invoke advisory jurisdiction of the Supreme Court on open voting. A five-member bench headed by Chief Justice of Pakistan (CJP) Gulzar Ahmed also issued notices to the speakers of all provincial assemblies, speaker of the National Assembly, Chairman Senate, and the Election Commission of Pakistan (ECP).

The government reference had argued that the condition of secret balloting referred to in Article 226 of the Constitution of 1973 is applicable only to the elections to the office of president, speaker and deputy speaker of the National Assembly, chairman and deputy chairman of the Senate, speakers and deputy speakers of the provincial assemblies and not to the elections for the members of the Senate held under the Elections Act 2017.

The presidential reference, on the advice of PM Imran Khan, had argued that the legislature could provide for an open ballot for the Senate elections by substituting the word ‘secret’ with ‘open’ in Section 122(6) of the Elections Act. The argument was that it will discourage floor crossing and the use of laundered money for vote-buying in elections that grossly insult the mandate of people. And that the Supreme Court of Pakistan can adopt the interpretation which advances greater public welfare and good.

The reference had emphasised that the requirement of a secret ballot for the Senate elections was not by way of a constitutional mandate, rather only by way of statutory provisions namely Section 122(6) of the Elections Act, which may be amended by an act of parliament or through an ordinance promulgated under Article 89 of the Constitution.

The open ballot will help acknowledge the respect for the choice and desire of the citizen voters, strengthen political parties as well as their discipline, which is essential for parliamentary democracy, the government had argued. Most legal analysts had suspected as early as December that court being a conservative institution will find it difficult to grant the wish.

Now when the government has decided to introduce a bill seeking constitutional amendment through the parliament it is obvious that the move in the court is not succeeding – the debate will thus continue through the month of February. How will the PTI government – that lacks the two-third majority in the national assembly – succeed in bringing a constitutional amendment remains to be seen.