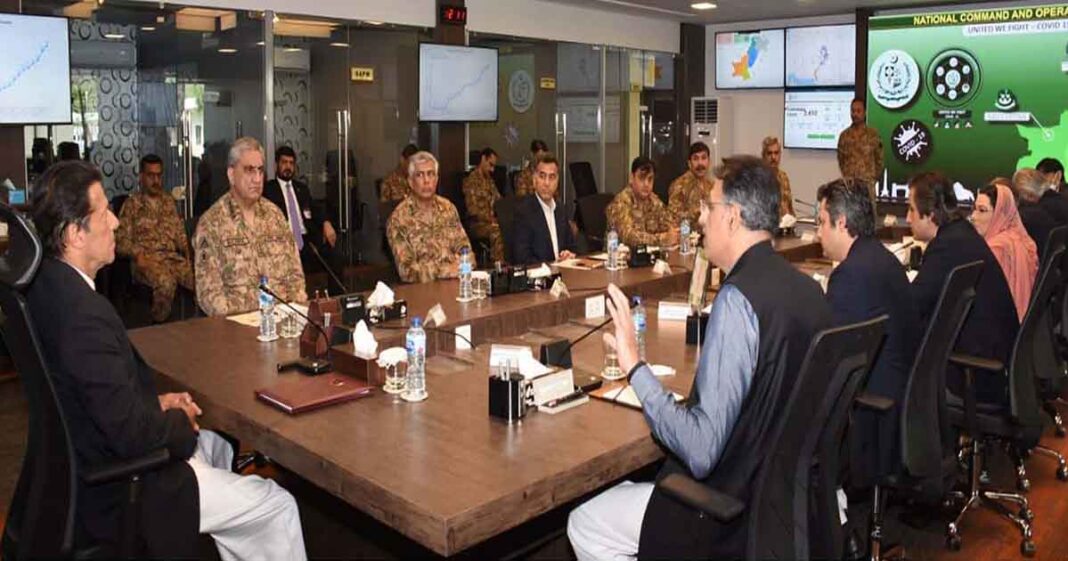 Last week I had the opportunity to spend a whole day at National Command and Operational Centre (NCOC) and I left with this palpable feeling that Corona Pandemic has induced Pakistan into creating a quintessential national institution – in the form of NCOC. An institution that may serve this South Asian nation of 200 million plus in dealing with other crises in future.

But odd as it may sound, little is known about Pakistan’s NCOC. As I was requested to cover its proceedings, in my tv program, related to discussions between centre and provinces on the centre’s recommendations to ease lock downs, I went searching on net. I wanted to contextualize my commentary – but I found nothing of substance.

Yes, there were some press reports, tv news stories and 2-3 TV programs but nothing to help you understand what Pakistan’s NCOC actually represents and what is its scope. From tv footage one gets the idea of a large meeting room where ministers huddle, around an oblong table, with uniformed officers – with swanky display of plasma screens and microphones. But this is only a part of story – a very small part.

NCOC was preceded by NCC (National Coordination Committee) in the second week of March 2020. But the journey towards this institution started in the fourth week of February, when Dr. Zafar Mirza, SAPM on Health, started to have his first meetings to tackle the challenge of as yet nascent threat of corona.

In its operations room, you find doctors, experts and officers in uniform pouring over the data that is continuously arriving from a nation state spread over almost 900,000 sq. kilometres

Meetings, I have been told were taking place in National Institute of Health (NIH) when a participant from the military pointed out to others that what is developing appears to be huge; we won’t be able to manage a coordinated response unless we have a command and operational centre that brings along provinces and dependent territories.

As others listened with incredulity, he argued that large resources will have to be mobilized and directed; provinces, public and media have to be taken into confidence and all that will not work from the old rusty structures of NIH. Dr. Mirza and others bought the idea. Presentations were prepared, soon a summary landed in PM Office. National Coordination Committee was born on March 13. On 27th March, it created National Command and Operations Centre (NCOC).

Located on Murree road, not far from Islamabad club with green elevations of Shakarparian and iconic Margalla hills in the background – NOCC found birth in the old offices of Earthquake Reconstruction and Rehabilitation Authority (ERRA). Quiet, like a demure lady, from the outside with its unimposing buildings, but ready to surprise you with feverish activity inside. This is how you feel when you enter NCOC.

In its operations room, you find doctors, experts and officers in uniform pouring over the data that is continuously arriving from a nation state spread over almost 900,000 sq. kilometres. With a population estimated to be around 220 million, Pakistan has around 300 cities with populations over 10,000 – 8 of these have populations above a million. Karachi is above 20 million and Lahore 10 million plus.

Every morning, since NCOC’s inception Chief Secretaries of the four provinces and two dependent territories (AJK and GB) brief the team of civil military experts – headed by Asad Umar, the planning minister – through video screens on the situation as it evolved through the last 24 hours. Information is flowing to Chief Secretaries from all district administrations and intelligence and army’s field formations provide support to this data collection and verification.

In terms of management, this may be South Asian country’s biggest war. Conflicts with India – with the exception of 1971 for people of erstwhile East Pakistan – have all been fought away from the cities and towns. Even the insurgencies post 9/11 were mainly in the periphery, but the war against the pandemic is being fought from every city and town across the 900, 000 sq. Kilometres. Clearly this is Pakistan’s biggest war.

This information management structure connected across the country then forms the basis of evidence-based analysis and decision making inside the NCOC. Morning proceedings are headed by Asad Umar, the planning minister. However, Interpretations, projections and conclusions drawn by the infectious diseases’ experts and government officials are fed to Prime Minister, Imran Khan, who remains the final decision maker.

Dr Faisal Sultan, Prime Minister’s Focal Person on Covid-19, has been one of the key point man to drive policy for collating, interpreting, processing and analysing the data flowing in from across the country. But he is not alone; senior doctors, experts of infectious diseases from Army Medical Corps (AMC) are present inside the NCOC operations.

But this is not all about the machinery of NCOC. Data of the health facilities sent by the provincial governments was then counter-checked and re-verified by reports from the ground. For that NCOC harnessed the wide network of the National Rural Support Programme (NRSP) to get situation reports from the ground in terms of infections and deaths reported at district and local hospitals. Reportedly, Pakistan’s work with polio vaccination, its data and experience were a great support in this crisis.

But NCOC did not stop here; realizing that quality of decision making depends upon accuracy of data additional independent counterchecks were requested through Intelligence and military set ups across the country. The state intelligence machinery is also playing a leading role in the Tracing, Testing, Quarantine (TTQ) strategy employed by the government to aggressively do ‘smart suppression’ of the infection.

It will not be exaggeration to say that military has played a pivotal role in this management of pandemic from the conceptualization and need assessments of NCOC to facilitation of its work. Civil servants in the provincial governments admit that they have been actively assisted by military commanders.

The reports from the ground by the NRSP, intelligence and military outfits help NCOC to assess that the health facilities, across Pakistan, were holding well to the pressure and the official death rate appeared fairly accurate. Pakistan was initially projected by May 15 to have 175,000 infected people with 10,000 of them in critical condition and nearly 3,500 deaths. However as of 10th May, deaths in Pakistan were less than 700. It’s understood, with experience, that overwhelming number of deaths could not have been hidden.

As mentioned above, by the turn of second week of May 2020, the total reported deaths across Pakistan (from its 4 provinces and 2 dependent territories; a population of around 220 million) were still less than 700. Even a single death is tragic but given the large number of deaths reported from the United States (almost 80,000) with population of 330 million versus Pakistan’s 220 million and Western Europe (well above 100,000) Pakistan’s risk appears low and manageable.

Infectious disease’s experts, like Dr. Faisal Sultan, are under no illusions. Talking to me, Dr. Sultan admitted that several factors could be at work. The virus that attacked across the United States and Western Europe appears different in its lethality; Pakistan’s younger population, its generalized exposure to infections and hot weather all may have played a role in low fatality rates being observed.

Similar data is being observed from India – in a population of more than 1.3 billion the reported deaths are around 2000. However, irrespective of the underlying scientific causes, this data collection, collation and interpretation has enabled federal government to make evidence-based judgements. The million-dollar question has been: Open now to ease economic pressures and risks of political melt down or wait further? Data analysis has helped Prime minister to move towards a partial open up from 9th of May. It remains a difficult decision.

Data analysis at NCOC could help federal government understand that health facilities across cities and districts – hospitals, wards, beds, masks, ventilators etc – still had excess capacity to cater to the pressure. The number of patients were increasing gradually but nowhere was there any run on hospitals – as it happened in Italy, UK, France, Spain and the United States – reported across Pakistan that would indicate that the health infrastructure was near being overwhelmed. However, this once again underscores the importance of accuracy of data.

CM Sindh, and his representatives, have consistently been critical of the decisions of partial lock down or easing the lock downs. They have consistently maintained that rate of infection and death have not been astronomical because Sindh – with Pakistan’s largest urban centre – went for early lockdown. Their arguments have weight – data from the US and Western Europe reveals that corona pandemic has principally hit the large congested urban centres. In Pakistan this means Karachi and Lahore.

But even Punjab, KP, Baluchistan, AJK and GB have not always been on the same page. When I watched the proceedings -as a fly on the wall – many recommendations of the centre were accepted by the provinces, but many were also turned down. It was almost a 50/50 kind of situation.

GB wanted funds to tackle the crisis, AJK did not like the idea of traffic from other parts of the country; Punjab, Sindh and Baluchistan opposed opening trains, planes, intra-provincial and intra-district bus services and so on. But herein lies the strength and utility of NCOC – and that is why I say at the outset that a great institution has been born.

Pakistan is not authoritarian China, monarchical Saudi Arabia or computer-controlled Singapore. It’s a democracy like the Italy, United States and the UK – albeit immature, imperfect and noisy like India next door. Without a platform like NCOC, where centre and provinces could wrangle, fight, agree and disagree every morning with the help of data slides, figures, stats it would have found it almost impossible to confront the humungous challenge of corona pandemic.

It was in NCOC meetings that everyone – from PM of Pakistan to Chief ministers to Chief secretaries – had to grapple daily with the facts, figures and challenges of Pakistani industry and populations. What is the number of PVC & steel units, electrical cable and switchgear manufacturing plants, steel/aluminium manufacturers, ceramic manufacturers, paint factories, sanitary ware and ceramics products, paint shops, steel/aluminium retailers, electrical cable switchgear retailers, hardware stores and how their closures are affecting economy, workers, taxes and so on. How many tertiary care hospitals do we have? How many private hospitals? What skill sets exist in health sciences?

How the shops in rural areas, are different from large towns and cities. How many shopping malls exist, how many schools, colleges, universities, mosques and madrassas are spread around the country. NCOC presentation also discussed traffic data learning that how on motorways, cars traffic since post-corona has reduced by 55 per cent; coaster/minibus traffic has reduced by 73pc; and bus traffic has come down by 95pc. This data portrayed that the impact of the lockdown is far heavier on the financially weaker segments of the population.

Fernand Braudal, celebrated author of History of Civilizations, and Arnold Toynbee, known for Study of History, had both argued that challenges test civilizations and cultures. Pandemic forced Pakistani system to create an institution like NCOC – and NCOC compelled ruling elite to confront the challenges of governance.

Political leaders had to come face to face to grapple with facts under deadlines of life and death. It was no more possible to appear on tv only with your own version and sleep happily ever after – because next day you had to sit in NCOC dealing with real facts. Pakistan has willy nilly created a new institution – a quintessential institution of governance and policy making. Let’s see if we manage to continue with this learning experience -and where we take it from here