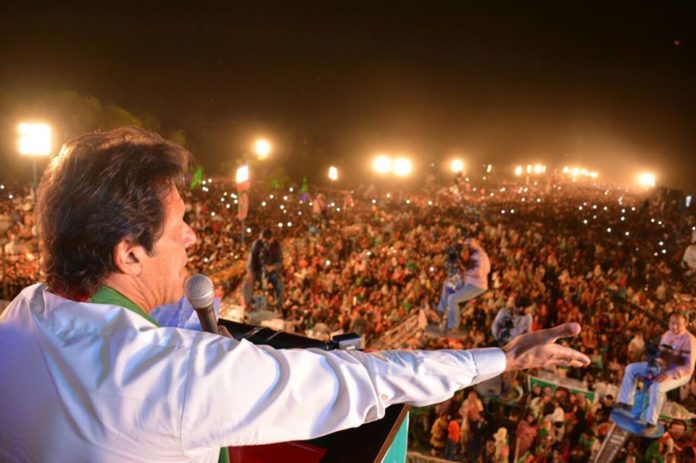 With Imran Khan of PTI announcing a ‘Campaign against Corruption’ from Fatima Jinnah Park in Islamabad; Jammat-e-Islami organizing a ‘Dharna’ (Sit Down Protest) against Corruption in Lahore, with Mustafa Kamal’s, Pak Sarzamin Party (PSP) organizing its first mass congregation in Bagh e Jinnah in Karachi, a feeling of ‘something cooking, something in the air’ definitely hits you. Add to this the fact that ‘an under sieged Prime Minister Nawaz Sharif’ facing the ‘God sent Curse’ of Panama Files has already announced a ‘Mass Contact Campaign’ (Awami Rabta Moham) from next week and you have an unmistakable evidence of ‘something happening’. But what that something is? And what it may become is the real question here.

Though the mythical 300,000 never materialized, PTI, on its 20th ‘Foundation Day’ was able to demonstrate large crowd mobilization. While importing young men from KPK, in hired transport, by a sitting PTI government — many of whom lost their minds and heads on finding themselves standing so close to beautiful emancipated Islamabad girls; something which PTI needs to address — should be less impressive, the significant  presence of people from Lahore and other parts of Punjab and very enthusiastic participation of men and women, often in the form of families, from Islamabad was a sign of party’s’ growing clout, urban middle class penetration and its ability to sustain the spirit of its young followers and professional classes despite repeated set backs at the hands of wily PMLN – PM Nawaz Sharif’s party, Pakistan’s version of GOP, well entrenched in Punjabi bureaucracy, military, media and judiciary.

While PTI’s crowd pull was definitely impressive, its event organization was poor. While Imran Khan was still speaking, and crowds from the McDonald end of Jinnah Ave were walking slowly, pushing and struggling to enter the park, hundreds of people were also seen emitting out of the single entry/exit on Jinnah Avenue. They told me that: there was insufficient space inside the park, it was uncomfortable to withstand repeated waves of push and pull, sound system was poor, Imran’s speech started very late and Khan Sb is repeating ‘old things’ they had heard before. Many complained that there should have been video walls/screens and speakers on the Jinnah Avenue itself. Why PTI did not do that? Perhaps it was not permitted. But there was a feeling that Imran’s speech was not ‘hard hitting’.

Though PMLN leaders, I later joined in Dunya News discussion, were blasting Imran for clandestinely using his ‘Party’s Foundation Day’ for attacking PM Nawaz, (what would an opposition leader do?) most PTI supporters wanted him to hit hard at Nawaz, the way he did in his press conference one day earlier, to come up with a game plan or perhaps demand Prime Minister’s resignation on Panama Leaks. They were disappointed for Imran – quite unlike his usual self – was cautious; he announced a ‘campaign against Corruption’ from Sindh, on 26th and a rally in Lahore on 1st, but regarding Nawaz, he only thundered: ‘Mian Sahib, apko jana paray ka’ (Mian Sahib, you will have to go). Perhaps he now realizes  that to push against Nawaz, he needs to develop greater momentum.

Or else, Imran is probably only reacting to the stage set by Nawaz Sharif – who has already announced his ‘Public Contact Campaign’. But Nawaz Sharif’s objective are clear. He desperately wants to shift the focus away from allegations of corruption that emanate from ‘Panama Files’. Public rallies will also demonstrate his ‘mass support’ to judiciary, bureaucracy military and to the diplomatic community. It will be a sort of ‘message’ to them all. If despite this maneuvering, ‘pliable commission’ still became difficult, if the pressure for ‘full & Complete disclosure’ kept mounting then these rallies may turn into a ‘pre-election campaign of sorts’ for a PMLN, that till the Panama Files was pretty confident of beating all its opponents in an electoral contest in Punjab; a province it rules – something which Law Minister, Zahid Hamid, argued in the cabinet meeting three days ago, prompting a laughter from all, except PM Nawaz. Public rallies, at national exchequer’s expense, by a chief executive, who appears to be dodging an investigation into allegations of corruption, is definitely a pugnacious idea, a kind of ‘Wag the Dog’ but everything is possible in Pakistan.

However, it raises a very interesting question: Is ‘Electoral Success’ a reprieve for criminal offense? Can public through vote forgive crimes of men in leadership positions? Is law only an ‘expression of popular will’? Can people of a village get together and forgive a ‘popular murderer’ through show of hands? Apparently in Pakistan, the idea is that ‘popular mandate’ washes all your sins. This was carefully planted into public imagination through print and electronic media, by a combination of self-serving politicians, writers, and media persons in the run up to ‘NRO’. Objective was to create space for acceptance of ‘National Reconciliation Order’ (NRO) which Benazir Bhutto needed to reenter Pakistani politics, and which Musharraf wanted to offer her in return for her support to stay on as president till 2013. History, like horror movies, is often cruel: She got murdered and her successors kicked out Musharraf.

But lets come back. Those self-serving crooks – disguised as ‘intellectuals’ mostly aligned then with PPP, who wanted to bail out BB and not Nawaz- who in 2005-7, built the case for disgusting ‘NRO’ in front of the Americans, argued that cases against politicians – both Benazir and Nawaz – were made purely on political grounds, politicians have suffered in jail (like Asif Ali Zardari) but nothing has been proved against them, and since they could not be convicted therefore they were innocent victims of ‘witch hunt against the politicians’. The term ‘witch hunt of politicians’ which you keep on hearing from all sides now and again – like by Ishaq Dar in Kamran Khan Show – was coined in that era.

Ironically these cases –like the famous Hudaibaya Paper Mill and the Swiss Cases – inherited by Musharraf, were mostly made by PPP and PMLN against each other. The allegations which we now find in ‘Panama Files’ against Sharif family originally surfaced in the FIA Report of 1993-96 which was the investigative work of PPP’s Rehman Malik – who now also finds his name in the Panama Files. How interesting?

But given the developments since then, all published and revealed by media, we now know for sure ‘Swiss Cases’ against Benazir and Zardari were true and genuine. If convictions were not obtained, it was not because of ‘political witch hunt of the innocent’ but because of the incompetence and corruption of Pakistan’s Criminal Justice System that was totally penetrated, compromised and bought over at all levels by the supposedly ‘innocent victims’ – who could completely manage it. Also, Sharifs struck a deal with Musharraf, courtesy Clinton and Saudis, in 2000, which then stopped all prosecution against them; and Musharraf, whose principal venom was against Nawaz, for his own selfish reasons, wanted to ‘go slow’ on Benazir, so that he can bring her into power sharing – to prolong his rule. This thinking, and mutual needs, lead to the infamous NRO – midwifed by the British & Americans.

Bottom line is that the ‘flawed and corrupt paradigms’ established by self-serving ‘hyenas’ who masqueraded as ‘intellectuals’ in the run up to a ‘Faustian Bargain’ between Musharraf and Benazir Bhutto for creating “NRO” may again be used now to continue the cycle of pain and misery. Is Pakistani state and people then the mythical ‘Prometheus’ being punished by God Zeus?

Question is: Will a new generation of Pakistanis, a decade later, will allow itself to be fooled again by the self-serving paradigms of ‘corrupt writers’ or will it cleanse itself like a smart CPU that routinely trashes the ‘corrupted files’ from its cache?

So lets sum up Pakistan’s Political Sunday. With Imran initiating his ‘Anti-Corruption Campaign’ from Sindh, with Jammat offering dharnas in Lahore, with PM Nawaz kick starting his ‘public contact campaign’ from KPK and with PPP’s Maula Bux Chandio shouting on Imran’s ‘Sindh yatra’ its clear that fault lines and alliances of Pakistani politics are being finally defined. PTI has apparently decided, without declaration, that PPP will leave it sooner or later; so let’s face today what confronts you tomorrow. Nawaz and Zardari will be natural allies, like they were since 2007. Its only that developing circumstances won’t allow them, anymore, to pose as ‘enemies’ and ‘opponents’. Next few weeks and months are thus momentous in shaping the coming decade of Pakistani politics. Though everyone tells me that in a country as illiterate, as elite controlled and as corrupt, as Pakistan, history will only repeat itself. Prometheus will remain chained to the rock, with Zeus’s  ‘mythical eagle’ eating away his liver. I am not that sure. I think you can fool all the people some of the time, some people all the time but you cannot fool all the people all the time. Something that worked out in 2006-7, wont work in 2016-17. Even then Benazir got murdered and Musharraf was kicked out by her successors.