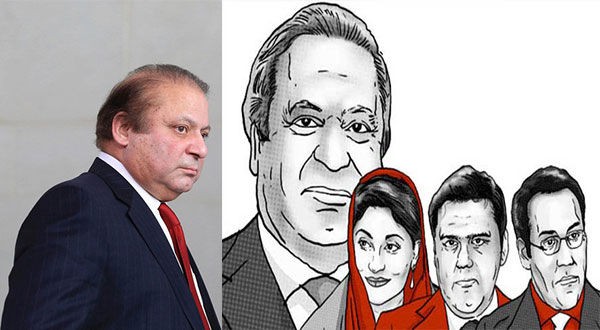 In the morning of 27th April, Pakistani public was bombarded with the front page stories in leading English and Urdu papers of a media group closely aligned with the government, stories that claimed that International Consortium of Investigative Journalists (ICIJ) that leaked the ‘Panama Papers’ has admitted that PM Nawaz Sharif’s name was wrongly implicated in the Panama Papers and that now it has been withdrawn.

This apparent ‘comedy show’ directed by Prime Minister’s Media Team – ironically on the day when the federal government banned film ‘Maalik’ for bad taste – was a spin as most urban educated Pakistanis and those active on social media have understood by now and as this piece will also further explain. But this ‘spin’ had a darker sinister side to it. And making sense of that ‘dark sinister move’ will help you understand as to where Pakistan is heading.

A cabinet meeting in the afternoon looked like a festival, a carnival, a party thrown to celebrate victory. And in this cabinet meeting, this ‘govt planted story’ which for all practical purposes appeared like a ‘handout’ rather than independent work by the paper became the basis, the justification for important decision making in connection with ‘Panama Leaks’. Ministers who were falling over each other, like courtiers in an ancient kingdom, to congratulate their PM for his great leadership, for extracting apologies and retraction from ICIJ then decided that now since PM’s name has been cleared of the ‘Panama Papers’ therefore there is no need even to seek consensus on TOR’s for the Commission. In other words, no need to revise the TOR’s in consultation with the opposition. See Dawn story by Khawar Grumman: Cabinet throws its weight behind PM

‘ICIJ Apologizing’ was a full comedy show, no holds barred, ‘Desi style’ but the irony of this is that it demonstrated once for all that now the Pakistani PM is so desperate for clearing his name that a ‘planted news story’ was being used as ‘psy-ops’ to set the stage for obtaining a ‘Subservient Commission’. The so called cabinet decision of unilaterally finalizing the TORs for the ‘Commission’ was nothing but a gimmick, another trick to increase pressure upon PTI and other opposition to persuade them to lend acceptability to a govt. created Commission. Reality is: without PTI’s acceptance, any Commission of Enquiry into Panama Papers will have no respect or legitimacy in the eyes of the public and the world.

On 27th April, I was one of the many Pakistani journalists, who sent emails to editors and directors of ICIJ in Washington and London enquiring if ICIJ had withdrawn Pakistani PM Nawaz Sharif’s name from Panama Papers, and Mr. Ryle, Gerard, Director ICIJ, promptly replied, in these words:

“We simply made it more clear that the link to the PM was through his children. That was already clear but we made it more clear. The News report is extremely misleading. As I understand from reading the report, it is claiming that ICIJ has issued an apology and withdrawn all mention of the PM being in the data. Let me be clear. The PM’s name is in the data, in reference to his children, and you can read about the Mossack Fonseca links here:

We stand by all of our reporting.”

That explanation was hardly needed. For any sane mind, the sheer stupidity, the pathetic script of the Pakistani govt ‘spin’ and its desperation was obvious and written large on the story itself. It was in the nature of claims. Anyone even slightly familiar with the Panama Files story, the discussion that followed world wide and the heated tv debates in Pakistan knew that awkward questions, allegations, doubts and suspicions around PM Nawaz Sharif all flow from his children possessing ‘Offshore Accounts’ or London properties.

Even in his own speeches, at least twice, Nawaz Sharif pointedly said that his name is not there; news stories in the same ‘friendly paper’ kept claiming that PM will clear his children’s name. PMLN ministers privately kept claiming that since children are not residents in Pakistan therefore ‘not much of a case exists’ since their transactions conducted abroad cannot be scrutinized. It was obvious that assets and accounts have been maintained in the names of the children, since 2006, as part of a legally thought out strategy. And it was obvious that a ‘Compliant Commission’ is needed where these children can safely appear in front of the ‘avuncular characters’ to say whatever they want to say and the matter can be hushed up, with a funny report after several weeks or months or years.

Overall strategy is still the same. It is only branching out into different tactics. PM Nawaz is desperately in need of a Judicial Commission, or a Court decision, or a parliamentary committee, an APC, something that looks like a ‘forum’ from where he could safely clear his name so that few weeks or months down the line, the State Dept spokesman in Washington can say: “Well, a Commission examined the charges against the PM Nawaz and has exonerated him”.

This strategy, like all strategies of ‘rich and powerful’ in Pakistan is patently a “legal defense”. It is not about facts and reality. That means you have to challenge all allegations not as facts but as points of law. Iceland’s PM had to resign, not because of legal issues but because facts of his case created doubts and suspicions; British PM David Cameron was never defending himself legally, he bravely explained the facts. PM Nawaz’s response of the past several weeks makes it obvious that he does not feel secure or confident about disclosing the facts of his assets, taxes, financial transactions and properties.

Troubled by his fears, unable to divulge the facts, Nawaz Sharif and his team are struggling with a ‘legal strategy’ of picking up fights, of threatening media critics, of pointing out flaws, however trivial they may be and then finally hiding behind the various provisions of law inside a ‘Pakistani Commission’ where accusers will have to bring evidences, where many questions will be time barred, previous allegations however credible will be ‘past and closed transactions’ and where countless other people will be dragged to prolong the proceedings and to create the impression that allegations against PM are just a tiny part of a large public trial or investigation of hundreds of others. Actions of the Nawaz govt. were also calculated to instill fears and insecurities in hundreds of Pakistani businessmen who are now afraid that they – for any reason whatsoever – can be hauled and harassed before a commission.

It was part of this ‘strategy’ of ‘legal defense’ and media disinformation that even an editorial correction, on behalf of ICIJ, that only straightens the sentence to make it clear that PM Nawaz is implicated not because of his own account but because of his children had to be used as a ‘big development’. Purpose of crying hoarse and loud is only to mislead the poor Pakistanis that live in small towns and villages. After all the ‘Public Contact Campaign’ is not for urban intelligentsia who cannot be fooled by such ‘comedy shows’ but for more disadvantaged populations.

Otherwise the urban intelligentsia and those with access to internet and social media also remember that Russian President Putin and Chinese President, Xi Jinping are named in Panama Papers only because of the accounts and activities of their relatives. David Cameron and Argentinian President are explaining the sins of their fathers. Name of Javaid Pasha (JP) rings bells about Asif Ali Zardari and so on. The whole Panama Papers is like this. No one in the whole world has reacted the way Nawaz Sharif has done. But then no Prime Minister had ever attacked his own supreme court.

And it is common knowledge that in corrupt Asian societies, top politicians, generals and other government executives keep their ill-gotten wealth in the names of their children and their families. Arguing that I don’t have accounts in my name, but in the name of my children is a pure, quintessential legal defense. It is good for a ‘Court’ or ‘Commission’ but it is of no use in a functional democracy. In a democracy, top politicians have to come clean in front of the public, parliament and the media. PM Nawaz is simply refusing to do that. If he is still hanging on, if no one can ask him to leave, if his party and opposition, and media are all helpless; if he is not even persuaded to disclose his assets and accounts and his transactions since 1981 or 1990, then its is only because Pakistan is not a democracy. After all in UAE or Saudi Arabia, Panama Papers, is not an issue. In China, we hear, these days, you can not search ‘panama’ on internet.

World outside ignores Pakistani absurdities because the argument is that Pakistan is a fledgling democracy. The only evidence to support this contention is that ‘Elections were held’. True! Elections were held. But in a system, where government can order state broadcaster not to broadcast the parliamentary debate on ‘Panama Papers’ or can force its version on private channels, where government can buy or threaten journalists and media houses, where government without any fear of accountability, can spend hundreds of millions in advertisement campaigns to defend a Prime Minister and his family facing corruption allegations, (as was done on 28th April) where senior bureaucrats are like ‘private servants’ or ‘naukar’ where politicians inside the political parties, like PMLN for instance, behave like the insecure employees of a ‘private limited company’ and where party or cabinet meetings are rare and most decisions are taken by the ruling family; in short all power is vested in few hands then how fair or credible elections can be? How can this system where all powers of the state are concentrated in few hands ever throw up a “Commission” that can examine the same powers?

Panama Papers, has exposed the nature of Pakistani politics and so called ‘democracy’. Whereas democracy is the best expression of mankind’s political thought and evolution, but ruling elite in Pakistan have specialized in running ‘dynastic family control’ in the name of democracy. It is in this milieu that the debate around ‘Panama Papers’ in Pakistan has to be understood. If the opposition, the media and the aware citizens succeed in braving the storm of bluffs and lies and ‘threats’ and succeeded in forcing the PM Nawaz to disclose his assets and transactions from the date he held public office then Pakistan will move on the road to become a ‘democracy’. Otherwise next elections, the elections after that and the next elections after that will all be meaningless. ‘Panama Papers’ is Pakistan democratic test.

An earlier version of this blog appeared on this website on 27th. Panama Crisis & Government by threats, bluffs and lies!

[Note: Moeed Pirzada is leading TV Anchor & Political Commentator in Pakistan. He is Editor Strategic Affairs with Dunya News; you can find his programs and writing on his official website: www.moeedpirzada.pk and he tweets at: MoeedNj]