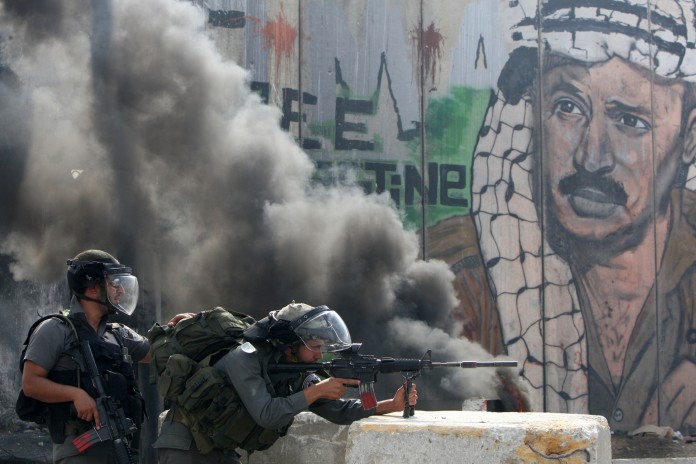 I was listening to Abu Mazen. This is how the Arab people and many Middle Eastern diplomats in Islamabad refer to Mahmoud Abbas, President of Palestine. This is coup d’état. He was talking of his conflict with Hamas in Gaza. With barely restrained anger, with emotions oozing out of his tired eyes, this 78-year-old comrade, founder member of Fatah, and a lifelong companion of Arafat described Palestinian’s inner conflict – with Fatah running a few miles of the territory on West Bank and Hamas on another small strip of land in Gaza – only as coup d’état by Hamas, only a rebellion. I wondered: will Abu Mazen even attempt explaining what led to that rebellion, that ensuing tragedy, which broke the Palestinian ranks and divided and destroyed their power to negotiate with Israel? What eroded their ability to sway the global opinion? But he didn’t.

President Mahmoud Abbas was in Islamabad to lay down the foundation stone of what will be the first formal brick and mortar Embassy of the Palestinian state. I asked him: “What has he achieved by the UN General Assembly granting the non-member status to Palestine in November?” He explained: “From disputed territories, now we have become a state under occupation.” Did he say: “A state under occupation?”

My head started to spin. Suddenly lost in time and space, vision after vision danced – without any respect for political correctness or chronology – on the kaleidoscope of my mind: the whole history of Palestine, Zionist Movement, Arab-Israel conflict, inquisition of Muslims and Jews in Spain, British mandate, anti-Semitism of the Europeans, holocaust by Germans, Nakba of 1948, Suez Canal crisis, 1967 and Israeli planes knocking out the scions of Pharaohs, sickening feeling of defeat and despair shared by us all, Pakistani crowds shouting on the streets, Tariq Ali on the sidewalks of Lahore, London and Oxford, Egyptian tanks rolling in Yom Kippur War, Pakistani mullahs damaging their vocal cords against America and Israel in their khutbas, Camp David with Begin and Sadat shaking hands, and then Muslim brotherhood quenching their rage of impotency with the blood of Sadat.

The disturbing visions, at times blurred with halos, kept appearing: screaming children from Sabra and Shatila oozing out from the screens of PTV, Lebanon’s occupation, Marine Barracks bombing, the first Intifada, Oslo Accord, two-state solution, Abu Mazen signing the recognition of Israel in the lawns of White House, Edward Said’s warnings and parting of ways with Arafat, second Intifada, Hezbollah blowing the myth of the invincibility of Markova tanks, first Gulf War, American troops in Saudi Arabia, al-Qaeda, Osama bin Laden, horrors of 9/11, stench of burnt human flesh and the horrors of imperial revenge that followed, drone strikes in Pakistan, in Yemen and everywhere. And Abu Mazen tells me that from disputed territories, we have now become a state under occupation? Am I really hearing this? Is he serious? Did he and his comrades, ever realised that along with their Palestinian brothers, how much Muslims worldwide and in Pakistan have suffered, became radicalised; and how politics of anti-West, rejection of modernity and material world evolved in these faraway lands, to a great extent, by associating with the plight of Palestinians?

In the post-9/11 political discourse, the Western governments and intellectuals are hell-bent, for obvious reasons, in not accepting that the Islam versus the West polarisation, which shaped the consciousness across the Muslim world, after Second World War, to the huge detriment of this blue planet, has mostly to do with this Arab-Israel conflict where religious identity and ancient scriptures were used to justify conquest and displacement of one people by another, thus injecting politics of religion into the post-war Middle Eastern discourse. And even today, though much water has flowed under the bridge, the resolution of this internecine conflict into a sustainable peace there, on that tiny piece of land, may help to improve the mental schisms everywhere on the planet, for all of us.

Talking to the head of a state – even one under occupation – has certain decorum, etiquettes and limitations and it was not possible for me to follow the trajectory of my politically incorrect brain waves to grill Abu Mazen on his contradictions. He asserted the jargon of received wisdom, that the “two-state solution” is the only way forward, and defended the recognition of Israel through the Oslo Accord, though he agreed that this recognition was offered in lieu of promises that never materialised, for the final settlement negotiations to be completed in five years could never conclude.

For that he blamed the assassination of Yitzhak Rabin, and the stringency of successive Israeli governments, the rightward shift of the Israeli politics and the emergence of unsavoury characters like B.B. Netanyahu. He was emphatic that Hamas’s rejection of Israel is only cosmetic for when Hamas talks of the “two-state solution”, then that second state has to exist.

He was right; Hamas’s rejection of Israel is not absolute; in fact, it exhibits all signs of its willingness to recognise Israel. But Hamas has certain terms and conditions on its mind; and despite neck breaking pressure by the US and the Europeans, it wants to bargain for something in return. And as it happens in a conversation, Abu Mazen, unconsciously, ended up giving conceptual legitimacy to what Hamas thinks.

When I asked him that now since you have recognised the state of Israel and in our neighbourhood India too has recognised – and benefitted tremendously to our great disadvantage – then will it not be helpful if Pakistan also recognises the state of Israel? “No, Pakistan should wait, till the Middle East Peace Process is accepted by Israel”, was his reply. Though there is hardly any evidence that Pakistan’s non-acceptance provides a meaningful leverage to the Palestinians – whose internal disunity is a gift to the Israelis – but it was clear that Abu Mazen thinks that recognition by Pakistan and some remaining Muslim countries like Iran or Tunis will provide a bargaining chip. But this is precisely what Hamas is looking for: bargaining a better deal.

And whatever Abu Mazen or Fatah may tell us, the Oslo Accord was that bad bargain, that “peace without principles”, which delegitimised and destroyed the spirit of the Palestinian movement. Edward Said – the towering Palestinian intellectual at Columbia University, the paradigm transforming author of ‘Orientalism’ – had warned then in a remarkably prescient piece, “The Morning After”, that appeared in the London Review of Books in October 1993, that Arafat and PLO have given away all what they had in return for nothing; he warned that Israel would not be under pressure to deliver and soon this will lead to internal dissention and revolt amongst the Palestinians and by the time a “final settlement” takes place, the Palestinians will be too weak to negotiate anything effectively. The destruction of Palestinian movement was inherent in the nature of Oslo Accord, that as Edward Said had predicted, turned PLO into a security guard for Israel.

In January of 1999, Edward Said argued in another landmark piece, “The One-State Solution”, published in the New York Times that the only and the only way to achieve sustainable piece in Middle East will be possible with a bi-national fully democratic state for Jews, Muslims and Christians. This may still look absurd today, and a newspaper article has its limitations in explaining; but this “One-State Solution” is the only way forward for them and for all of us.