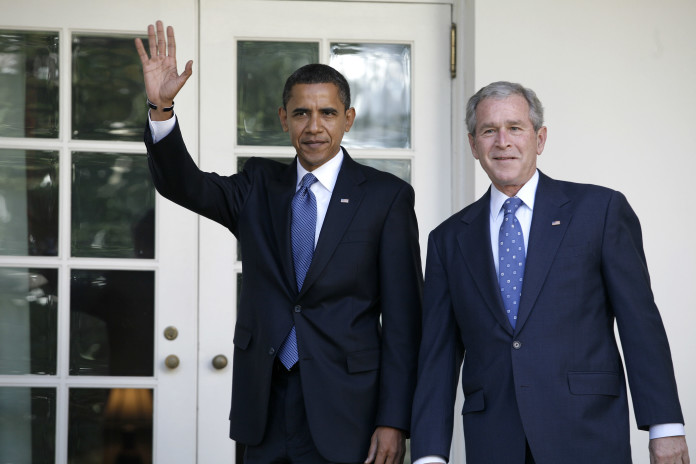 These overtures were a must to ensure the continuity of US strategic interests in a period of transition. However, it ended up creating the impression as if the fault lines between Pakistan’s new political dispensation and the US centre around Musharraf. Well for the time being they do — but the real trouble lies somewhere else.

As the diplomatic activity became visible many newspapers in Pakistan shot up editorials and op-Eds condemning the US interference. They termed it: meddling in Pakistani politics and attempts to negate the will of Pakistani electorate, which had overwhelmingly rejected Musharraf.

This was sheer hypocrisy. The US State Department and media have been active throughout the last few months mediating with Musharraf’s regime on behalf of Pakistan’s civil society, politicians and the media. None of us objected to that interference then; if any thing it was actively sought and welcomed and often any delay of statements from Washington were resented; how could the rules of the game change suddenly?

In reality the US State Department and the media have remained very active in following and shaping the political developments inside Pakistan. And this is not only in the last few months but it built up over the last two years. In what may be referred to a “constructive engagement” the US media joined the State Department, the US embassy in Pakistan and Pakistan’s civil society in pressurising the Musharraf regime to move towards a process of “credible elections”.

It was this relentless process of engagement, confidence building on all sides and persuasion that lead to, among other things, the: return of Benazir Bhutto; issuance of NRO to facilitate her party; prevention of emergency the first time in August; taking off uniform by Musharraf; an early end to emergency and easing of the restrictions on the media and ensuring an election that could be accepted by all stakeholders. This process of engagement has almost turned the US State Department into a domestic player in sync with Pakistan’s civil society, media and politics.

Yet this apparent alliance between the US interests and Pakistan’s civil society especially in the last few months may have hidden the serious differences that lie underneath; fault lines few like to address on either side of the divide.

Laura King of the Los Angeles Times may be one of such few US journalists who came up clearly pointing out that the election results in Pakistan do not mean support for the US policy of stepped-up attacks against the militants. [LA Times; 26 Feb]

US paradigm from the beginning of 2006 — gradually adopted by the British political establishment — that lead to the acceptability of Benazir Bhutto in Washington and her return to Pakistan was based on the premise that Ms Bhutto and her party will provide a foundation of popular political support to General Musharraf’s war against terrorism. I suspect that this paradigm was less a result of original thinking on behalf of the US State Department and more a case building by Ms Bhutto and her supporters in the US and some articulate voices inside Pakistan’s print media. The very fact that Washington establishment bought it — and ignored the former premier Nawaz Sharif — points out the US difficulties in understanding Pakistan and their limitations in terms of choices.

Ms Bhutto before her tragic death gave repeated statements to keep that assumption alive and recently after winning elections Mr Zardari, her widower and co-chairman of the PPP, has twice echoed the same message. But it should be of some significance that even the PPP election campaign in Pakistan was conducted without any direct reference to the war against terrorism. And Mr Nawaz Sharif — who has undoubtedly emerged as the most popular national leader in Pakistan — maintained a careful distance from the jargon of the war against terrorism. Since winning the elections he has even demanded that US needs to define the war against terrorism in more specific and narrow terms.

Taking a quick glance at the last few years, this strategy of “face change” for beefing up support for the “war against terrorism” may not be anything more than a short term remedy.

True! Musharraf had never been a popular leader in the way a politician inspires by his words and jugglery and wins elections but for the first few years in power he enjoyed high approval for his actions. His decision to support the US against the Taleban and overtures of peace towards India were popularly accepted as difficult decisions taken under pressure but nevertheless in the best national interest. His downside started when he was increasingly seen unable to preserve Pakistan’s interests in Afghanistan or secure any concessions from India for his peace overtures.

Public and the politicians — many of whom will now come into power — and the Pakistani media often blasted Musharraf for being a US stooge; the lackey who was continuously making concessions against the national interests for he lacked legitimacy and popular support. US media were against him from the very beginning; initially because they suspected him or his military for covertly helping the Taleban and working against India and later when he became unpopular they resented Bush Administration for propping up an unpopular dictator — a situation that reminded many of the US support for the Shah of Iran.

Ironically, the principal under-current of the lawyers movement was unmistakably nationalistic with references towards the “missing persons” and a feeling that strong independent judiciary may provide some protection against the repeated dictates and insults from the US; an assumption that was lead credence by the Bush administration’s failure to support the cause of the reinstatement of the judges.

Summing it all up: Musharraf is merely a symbol of the fault lines; the real test of the new political construct’s ability to deal with the US will depend upon the extent to which US policy makers and media are able to revisit the whole concept of this ongoing war against terrorism.

Many in Pakistan’s civil military bureaucracies are extremely suspicious of some sort of ‘undeclared regional agenda’ by the US; others are concerned that tragic consequences to Pakistani social fabric are not being understood by the US and yet there are others that understand that a continued US engagement is a must for the economic expansion and sustenance of this region. In the wake of Pakistan’s elections a new US vision is needed that can assuage these fears and take most if not all on board.