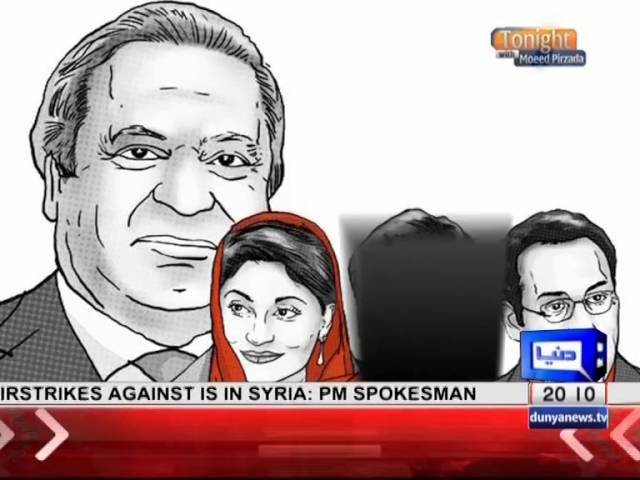 For the past six weeks, PPP leaders have been playing the ‘Punjabi gallery’ and playing well with rhetoric, acrobatics of emotion and feigned anger to present themselves as an ‘opposition’ to the reign of Nawaz Sharif. Moment of truth is now only few hours away.

In the morning of Mon, 16th May, Prime Minister Nawaz Sharif will hopefully present himself to the parliament; this, if the moment is genuine, can probably be the most difficult performance of his political career. However, whether he swims or sinks, emerges out laughing or ends up crying will mostly depend upon the theatrics of one man; his name is: Khurshid Shah of PPP.

We have been told ad-nauseum that PPP Punjab sees ‘Panama Files Leaks’ as its opportunity to reenact itself in its birth place: Punjab. We have heard that Bilawal Bhutto, is the new young dynamic supreme leader of the party, who believes that Nawaz Sharif should resign and who has declared a ‘soft coup’ within PPP against his own father: Mr. Asif Ali Zardari.

However they say: Once bitten twice shy; we remain incredulous since we know how both these parties – PPP & PMLN – have struck a Faustian bargain in the APC of London in 2007, a Faustian bargain essentially against the people of Pakistan and state of Pakistan and how they fooled everyone till it became obvious that they have a ‘muk-mukka’ and they are only playing ‘Opposition-Opposition’ game like children play ‘doctor-doctor’ in a village.

So when Barrister Aitzaz Ahsan says, as he said again in my program, on Dunya News, on Saturday, 14th May, that ‘PPP is united behind Bilawal, we have no differences, Khurshid Shah sounds different only because he is soft spoken’ we want to believe because Barrister Aitzaz is an honorable man- a rare breed in our politics – but we still want to remain cautious; we need to see the proof, and fortunately the ‘Moment of Truth’ of what lay behind Bilawal’s rhetoric or what PPP really stands for is only a few hours away.

Why Khurshid Shah is important? Because despite never personifying genuine opposition to the Nawaz Govt, despite only making occasional cosmetic gestures, few purrs here and there, he is still nevertheless the ‘Leader of the Opposition’ in Pakistan’s inconsequential debating club, euphemistically referred to as ‘national assembly’. This was off course part of the scheme of things thrown up by the 2013 Elections. So whereas PTI represented the original hot molten opposition on the streets and on the media, within the national assembly even this title belongs to Zardari’s party, an entity that has been aligned with the ruling Nawaz regime since their pact of 2007. So what will Khurshid Shah do on Mon, 16th May?

The needs of opposition and Nawaz Sharif are at 180 degrees apart. The so called ‘Combined Opposition’ wants Nawaz to answer its seven questions; those seven questions are designed to obtain ‘facts’ and ‘statements’ from him, on the floor of the assembly. These ‘statement of facts’ – regarding his wealth, his assets, asset accumulation since 1985, and taxes paid etc – are needed if a Commission is required later to examine these. Without these ‘statements of facts’ any Commission will be meaningless, cannot reach any conclusion, will be a waste of public money and time.

Much acrobatics, of anger and bewilderment, have been done by the usual brigade of PMLN wannabees to divert attention, to dilute importance of these questions. It appears that PMLN ‘fight brigades’ are prepared to indict, burn or lynch half of Pakistan to create a situation where Nawaz can somehow avoid answering these questions. Perhaps Nawaz’s appearance in national assembly on Friday was delayed since Imran’s confession on his ‘offshore company’ had to be secured through the Ptv-2 and Pakistan Times. [work must have been going on this, for a while; all critics including useless people like me in media are being mercilessly scrutinized, through all means available to the state, to create a scandal; Imran offcourse is ‘democracy’s enemy No.1]

But it is not in the interest of Nawaz Sharif to answer these seven questions. Listening carefully to Mohd Zubair, State Minister for Privatization, in today’s program with me, in which he blurted while explaining the 1993 purchase of Offshore Accounts and Apartments that ‘Sharif Clan’ needs to be differentiated from ‘Nawaz Sharif and his children’. My ears started to buzz, alarm bells rang in my head; I had a sick feeling that the explanation ready for the ‘Supreme Court Commission’ will claim that ‘Sharif Clan’ – namely Mr. Mian Mohd Sharif late father of Nawaz Sharif and his sons like Abbass or cousins etc – had created the companies and purchased the properties and now since they are dead, most details are missing, not available, cannot be traced. Children of Nawaz Sharif have merely inherited the family wealth in 2005 – as Mohd Zubair hinted. You must watch this video.Tonight With Moeed Pirzada: Nawaz Sharif’s foreign Asset !!!

Nawaz will thus prefer to appear in the national assembly, make some gestures of regard to the parliamentarians, say some consolatory sentences, some kind words, and then tell them what he has already told us many times before that while his name is not in the Panama Files, and while Imran Khan had an Offshore Company (and no one knows if Imran made his money from country cricket or drugs or gun running or porn stuff) but ignoring these unsavory details, about his principal and the only opponent, he will generously offer himself and his family up for all kinds of accountability – through a Supreme Court Commission. And will offer them and request them negotiations for creating ‘Consensus on TOR’s’. He won’t answer the ‘Seven Questions’ the ‘Seven Golden Bullets’ of Truth. It is not in his interest to do so. He needs a Commission to hide behind it; a Commission where facts will be debated, obfuscated, defeated, and submerged through points of law, through principles of ‘past and closed transactions’ legal precedents, judgments of high courts, violations of human rights, issues of discriminatory treatment and conflict of laws with foreign jurisdictions. Panama Papers & Pakistan’s Kingdom of Lies!

This will be the moment, where we will find out what PPP really stands for and whether Bilawal has any real control on this old machine. Will Khurshid Shah, welcome Nawaz’s great benevolent gesture, thank ‘King Nawaz’ for coming to the parliament (as brown Indians had thanked white English King George V for coming to the Delhi Court in 1911) and do his wishy washy speech, swinging from left to right, going up and down, to stress the need for ‘Consensus on TORs’ or else will he politely but firmly demand, as leader of the opposition, that PM Nawaz should first answer the questions raised by the combined opposition, with facts and statements, with documents as Aitzaz has explained in so many media interactions in the last few days? What will Khurshid Shah do, with his speech, his comments, will determine what PPP actually stood for and what will follow.

As I pointed in my earlier piece “Soft Coup: Has PPP Punjab rebelled against Zardari” [15th May, 2016] Soft Coup: Has PPP Punjab rebelled against Zardari? Nawaz has two kinds of allies: Declared and Undeclared. Declared; those like Maulana Fazal ur Rehman, Mehmood Achakzai and Hasil Bizenjo’s National Party who are aligned openly and ‘Undeclared’ like Sherpao, MQM and ANP – and may even be Jammat e Islami. Once the signal for need for ‘Joint TOR’s” emanated from Khurshid Shah, these ‘declared’ and ‘undeclared’ allies of the PM Nawaz will thunder in applause appreciating the great gesture from Nawaz and will all align behind Khurshid Shah’s demand for ‘Consensus TOR’s”. No one will ask PM to answer the Oppositions Questions, no one will demand his statement of the facts. Imran and PTI will be left alone, gawking like idiots into blank space. A section of media – Unholy Trinity of a TV Channel, an English Paper and a Urdu Paper – will immediately bring the good news to the whole nation. There will be ‘special prayers’ in Akora Khattak to thank God for the saving of democracy.

If one listens to the pronouncements of Chairman Senate, Raza Rabbani and Senator Farhat Ullah Babar – both close to Mr. Zardari – over the last 48 hours, then the stage for the ‘saving of democracy’ has been set once again. Today railways minister, Kh Saad Rafique also reminded his audience that martial laws have always taken the country back. Trick is obvious: instill the idea, the fear in minds, that Panama Leaks represent Establishment’s conspiracy against civilian democracy. Initially it was American CIA conspiring against the China Pakistan Economic Corridor. But don’t miss the point, though this is all bogus, but yet this ‘implant of bogus idea’ this rubbish, this utter nonsense is coming from both sides: PPP and PMLN. Two entities joined at the hip since the APC of London in 2007.

I hope PPP and Khurhsid Shah prove me wrong; and I hope PTI and Imran Khan have imagined this eventuality and have something up their sleeve too. All analysts love their analysis, like their ‘dear and only child’ and so do I, but I will love to be proved wrong in this case. I want to trust Barrister Aitzaz.

There used to be an old advertisement on Ptv. It said: “Chai Chahye; Konsi Janab? Lipton Umda Hay” Today the political situation is: Commission Chahye; Konsa Janab? ‘Supreme Court ka Commission with Opposition’s Consensus’. From the day one, I am pointing out that one man desperately needs a Supreme Court Commission; his name is Mian Nawaz Sharif. His needs cannot be met without this kind of commission. But if he had asked for this ‘commission’ straightway then all his critics, his enemies and his real opposition – namely Imran Khan and PTI – would have denied him what he needed the most. All the chivalry, emotional outbursts of tv brigades, the angry tricks, the colorful gimmicks of PMLN firebrands and its allied parties were to develop a situation of acceptability for a ‘Supreme Court Commission’ with ‘Opposition’s Consensus’. Without opposition’s consensus such a Commission will be useless. It will serve no purpose.

So we have moved through a carefully crafted journey of ‘Offer of a Commission Under Retired Judge” then Prime Minister’s team sending unilateral TORs to Supreme Court with a clear realization that since opposition has not been consulted so the Opposition will reject that initiative. This is called ‘softening’; PMLN team has played well. On 16th May, you will find PM Nawaz quiet willing to accept the Opposition’s TOR’s; offering negotiations to create consensus. And you will find a Khurshid Shah willing to play along. But don’t expect Nawaz Sharif to answer you the questions set by Aitzaz and company.

What will Imran Khan do? Difficult to predict, since he has always been an unpredictable cookie; but all this stage has been set to capture him and lets see if they got him or he has a trick or two up his sleeve? Lets see! I wait for myself to be proved wrong!