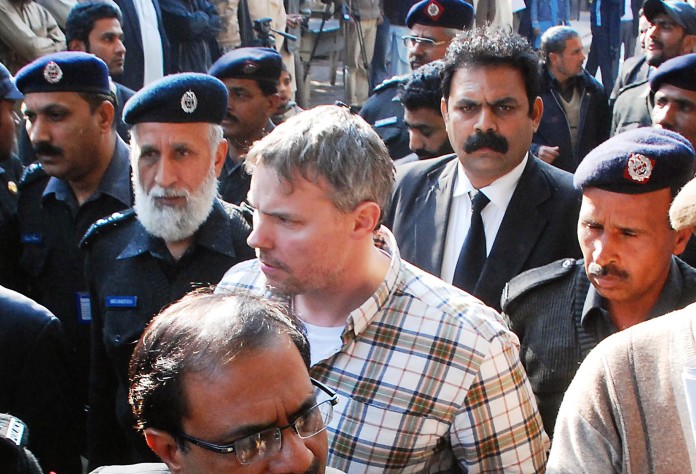 In all fairness, the Raymond Davis saga, irrespective of the technicalities being discussed in Pakistan, may prove a fit case for the world to review the whole concept of ‘diplomatic immunity’

When Secretary Clinton came to Pakistan in July of 2010, I again got an opportunity to moderate a discussion with her. But that morning I struggled hard to find an opening sentence that could encapsulate the rather sedate mood since her earlier visit in October of 2009. And I opened by saying, “Secretary, I am afraid you are coming to a somewhat boring Pakistan; today no one is talking of Blackwater and of Americans running with Pakistani nukes.” She laughed and said, “Thanks! Boring is good.”

Unfortunately, thanks to the Raymond Davis saga, and the way we all handled it — and that includes both Pakistanis and the Americans — this is not boring anymore. Seven months ago, almost like a public barometer, I could feel that relentless engagement and public diplomacy by Clinton, Holbrooke, Mullen and Petraeus on the one hand and countless Pakistanis within and outside the government on the other. There started to appear a level of trust and stability on the horizon of the US-Pakistan relationship, the kind of stability which if sustained can do much good for countless millions in this troubled region. But the events of the past few days have re-ignited the old fears, mistrust, paranoia, and conspiracy theories. The genies of ‘Blackwater’ and ‘denuclearisation’, however unfounded they may be, have again become part of the public discourse. Viewed from the tunnel of time and space, Pakistan looks like Somalia and the US like imperial Rome.

We have an awful lot of cathartic thinking to do. We can blame the Punjab government for not consulting the foreign office before the arrests and judicial remands; we can blame the foreign office for not determining something that is not for the courts to decide; we can blame ourselves in the media for our insatiable hunger for the sensational; we can blame the US Consulate in Lahore for their contempt of the local laws, and we can blame the US Embassy in Islamabad for showing far less sensitivity than was needed under the circumstances. We should certainly blame General Musharraf and the idiots around him who struck a Faustian bargain with the Bush administration to allow these ‘RoboCops’ in our cities. One person we should not blame is the contractor code-named Raymond Davis, for he did what he was trained to do. This disaster was built into that stupid policy; it had to happen one day.

Rather we should be wary of those pseudo-intellectuals and ghost writers who are trying to belittle the enormity of all that happened in Lahore by creating a fiction that the Vienna Convention is tailor-made to deal with such situations or that there was an easy way out.

Proverbially, diplomats can get away with murder. But in reality, death and especially murder by diplomats has been rare and almost always created difficult, ugly and often messy situations. When, in January 1997, Georgia’s Gueorgui Makharadze, the Harvard-educated Deputy Chief of the Mission, had a car crash in Washington that killed 16-year-old Joviane Waltrick, he sought immunity but President Clinton and Republican Senator Judd Gregg pressured the then financially beleaguered Georgian President Eduard Shevardnadze to lift the immunity for its second top diplomat. Makharadze was tried in DC and sentenced to seven years in jail. In 2002, British Prime Minister Tony Blair personally intervened to pressure Colombia into waiving diplomatic immunity when its diplomat was accused of murdering Damian Broom, a 23-year-old Tesco warehouseman.

But perhaps the death of British policewoman, Yvonne Fletcher, during the Libyan Embassy siege in London in April 1984 is most instructive to help understand the kind of reactions and messy outcomes that may follow. Fletcher was killed in St James Square, when apparently bullets were fired on protesters from inside the embassy. The situation remains confusing to this day; the murderer or shooter could never be identified. In 1997, a Channel 4 Dispatches documentary, ‘Murder in St James’s’ in which ballistic expert Colonel George Styles, home office pathologist Hugh Thomas and Professor Bernard Knight testified that technically Fletcher could not have been a victim of bullets from inside the embassy. In 1999, while Libya was desperate to mend fences with the West, it accepted a general responsibility and paid compensation though the mystery of Fletcher’s death could not be conclusively resolved. But guess what happened in 1984?

In 1984, tempers were so high that a furious London Metropolitan Police continued an armed siege of the Libyan Embassy for 11 days. Colonel Gaddafi shouted obscenities on the violation of diplomatic immunity and ordered a counter-siege of the British Embassy in Tripoli. Finally, relations broke down and diplomats were ordered to leave under police escort. Some argue that Fletcher’s murder and the tensions that followed later became the major factor in Prime Minister Margaret Thatcher’s decision to allow US President Ronald Reagan to launch the USAF bombing raid on Libya in 1986 from American bases in Britain.

Even a moment’s reflection would help us understand that situations differ and political challenges may arise that do not offer neat, clean and easy solutions. And the tragedy in Lahore — a double murder, arguments of self-defence that look less than convincing to many, illegally possessed weapons, a third death by manslaughter, issue of fake identity, association with a Blackwater-type organisation, and a diplomatic status that, at best, is controversial — is clearly a unique challenge. Add to this the Pakistani public’s colourful narratives of ‘Blackwater’, ‘denuclearisation’ and ‘ruling elite as American stooges’ and now a widow committing suicide and you will start to realise the immense difficulties of all those who are working to find a solution. In all fairness, the Raymond Davis saga, irrespective of the technicalities being discussed in Pakistan, may prove a fit case for the world to review the whole concept of ‘diplomatic immunity’.

Let us not kid ourselves; this is not going to be settled inside the Vienna Convention. This needs to be resolved inside the bilateral relations. I wish the indefatigable Holbrooke were around today. Anyway, it is not a secret that Washington has much leverage in Islamabad, so a rough solution may be emerging within the next few days. But as both sides wriggle to get out of this, it is imperative that a small tactical victory should not be allowed to jeopardise the gains of diligent public diplomacy of the last few years. Two things are vital: one, whatever happens should not emasculate those in Pakistan who take inspiration from the US as a beacon of hope for the rule of law; second, it may be the time to review and do the cost-benefit analysis of the Faustian bargain struck between a military dictator and the most cerebrally challenged president in US history.