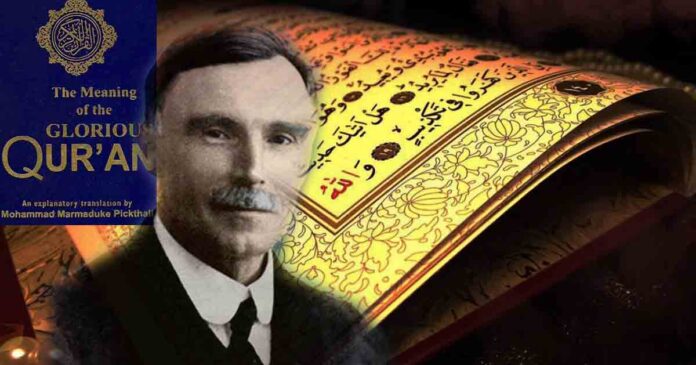 Muhammad Marmaduke Pickthall died on 19th May, 1936. Today, few in the Muslim world remember him but maybe they should for he was the first Englishman to come up with a credible translation of Muslim’s Holy book, Quran, into English.

Pickthall was a convert from Christianity, he has been variously described as a novelist, esteemed by D. H. Lawrence, H. G. Wells, and E. M. Forster, as well as a journalist, headmaster, and political and religious leader; and we are told at Harrow he was a class fellow of Sir Winston Churchill. But above all these identities he was a British Muslim scholar -and that is how he should be remembered by more than one billion Muslims across the world.

21st Century Muslim scholar, A.R. Kidwai, offers a moving tribute to Muhammad Pickthal while writing a review for, “The Meaning of Glorious Quran”. Kidwai reminds us that in the “Foreword” to his English translation of the Quran, The Meaning of the Glorious Quran (1930), “partly out of the innate modesty of a scholar and partly in deference to the truism that the Quran being literally the Word of God is untranslatable” Pickthall had lamented his inability to capture and articulate in his English version “that inimitable symphony [of the Quran], the very sounds of which move men to tears and ecstasy”.

Meaning of the Glorious Quran, by Muhammad Murmaduke Pickthall

These lines are present even in the latest editions being sold by Amazon and other book companies.

Quran moves its readers to tears and ecstasy!

Yet, as A.R Kidwai argues Pickthall’s work published ninety years ago has been remarkably successful to this day in moving its numerous readers to tears and ecstasy, and in inspiring scores of later Muslim scholars to embark upon their own Quran translations.

This humble scribe had the opportunity to read from, “The Meaning of Glorious Quran” during his school days on the recommendation of his father and later while preparing for his Islamic studies paper for CSS and like any other English speaking Muslim he too can testify to the mesmerizing power of this English translation.

Today, the English translations of the Quran by Muslims, number more than fifty, but even today Pickthall’s work holds pride of place for at least two reasons: One, it was the first worthy translation, and Second, it served all along as the touchstone against which all later ventures have usually been measured for their faithfulness to the original Arabic/Quranic text and for gauging their mastery or otherwise over the English idiom and usage.

Though Pickthall’s majestic English translation of the Holy Quran was finally completed in 1930, as the final culmination of a project sponsored by the Nizam of Hyderabad, the ruler of what was once the richest princely state in British India, but he had this project in mind soon after his internal acceptance of Islam in 1914. How he finally declared himself as a Muslim makes for an interesting story. It was after delivering a talk on ‘Islam and Progress’ on 29 November 1917, to the Muslim Literary Society in Notting Hill, West London that he dramatically declared himself a Muslim.

Charles was an Anglican clergyman, the rector of Chillesford, a village near Woodbridge, Suffolk. So, interest in religion and scripture was in his blood and DNA.

Young Pickthall spent the first few years of his life in the countryside, living with several older half-siblings and a younger brother in his father’s rectory in rural Suffolk. He often suffred from bronchitis.

On the death of his father in 1881 the family moved to London. He attended Harrow School but left after six terms. As a schoolboy at Harrow Pickthall was a classmate and friend of Winston Churchill.

We don’t know when he started to convert to Islam internally in his heart, since he never publicly declared till 1917 as mentioned above. However, from his writings, his articles, we know that he had started feeling the need for a quality translation of Quran, in English, which might help readers “feel the power of inspiration in it”.

Pickthall’s translation in English – though often referred to as the first, in India and Pakistan, was not literally the first. My father and later the erudite looking librarian in the Quad-e-Azam Library Lahore (1989) had told me so. But as I mention above it is for all practical purposes the first credible translation in English that can help a native English speaker to discover the majesty and power of Quran because of the correct use of English idiom that is understood by native speakers.

Prior to Pickthall’s work three types of English translation existed: One, those by Orientalists namely, Alexander Ross (1649), George Sale (1734), J.M. Rodwell (1861), and E.H. Palmer (1880). Second, those by another group, Ahmadi translators, namely, Muhammad Abdul Hakim Khan (1905) and Muhammad Ali (1917), and by Ghulam Sarwar (1920) who had Ahmadi leanings. And third, Those by some well meaning but very poorly equipped and incompetent Muslims of British India namely, Abul Fadl (1911) and Hairat Dihlawi (1916)

Ross, Sale and Rodwell could not fully understand Quran – perhaps because of lack of command over Arabic and also because of lack of the kind of love and devotion that was needed for the work. Ahmadiyya translations introduced issues that can be considered controversial by most Muslims.

And the two earliest translations by Muslims namely, Abul Fadl (1911) and Hairat Dihlawi (1916) had the ambitious plan of countering the Orientalists’/missionaries’ charges against the Quran in their commentary. However, as observed by A.R Kidwai, these deliver very little in terms of meaning. If Ross, Sale and Rodwell were not well versed in Arabic then Fadl and Dihlawi did not know English well. Neither of them had academic credentials or any real grounding in English idiom and presentation skills. So while they did record for the first time the Muslim presence in the field of English that was it. Perhaps this passionate task was to be undertaken by Mohammad Marmaduke Pickthall.

The translation, “Meaning of the Glorious Quran” was authorized by the Al-Azhar University and the Times Literary Supplement (TLS) praised his efforts by acknowledging him as the “noted translator of the glorious Quran into English language, a great literary achievement.”

Pickthall had identified himself as a, “Sunni Muslim of the Hanafi school”. He remained active as “a natural leader” within a number of Islamic Organizations and travelled actively across Middle East and British India. He was often condemned, in Britain, for being a staunch supporter of the Ottoman Turkey and reportedly refused fighting against the Turks during the First World War (1914-18).

He preached Friday sermons in both the Woking Mosque and in London. Some of his khutbas (sermons) were subsequently published. For a year he ran the Islamic Information Bureau in London, which issued a weekly paper, The Muslim Outlook. Pickthall and Quran translator Yusuf Ali were trustees of both the Shah Jehan Mosque in Woking and the East London Mosque.

In 1920 he went to India with his wife to serve as editor of the Bombay Chronicle, returning to England only in 1935, a year before his death at St Ives, Cornwall. It was in India that he completed his translation, The Meaning of the Glorious Koran, in 1930.

Pickthall was buried in the Muslim section at Brookwood Cemetery in Surrey, England where Abdullah Yusuf Ali was later buried. Muslim world owes him a debt by remembering him on his 74th anniversary. He died on 19th May, 1936.