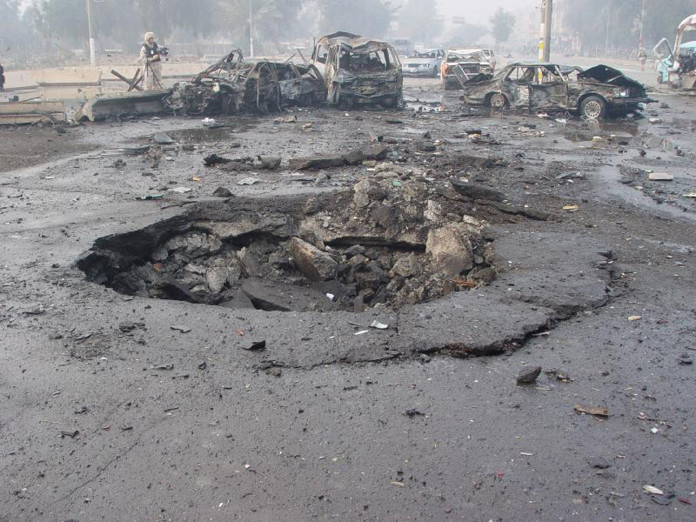 Former prime minister Nawaz Sharif and Mr Zardari, Ms Bhutto’s widower, were able to reconcile their differences for a historic accord that promises the restoration of judiciary sacked by President Musharraf. And it appears that Mr Zardari is finally able to sideline Makhdoom Amin Fahim with a view to his own candidature for the prime minister of Pakistan.

But then there were other happenings that if not totally sideline then at least take away the sheen from these political developments. After a brief lull the terrorists struck with impunity — leaving hundreds dead or maimed. Their aim was to bleed Pakistan’s heartland, Lahore. In a situation where many people are worried if going to office or stopping at the next red light will be safe, the question who will be the next prime minister has lost much of its meaning. What is important is will he or his government be able to rethink and renegotiate the whole concept of the war against terrorism?

Some recapitulation will help see things in perspective. More than 1,500 Pakistanis died in around 130 terror attacks in 2007; almost five every day on average. Hundreds more have died since the beginning of this year. Pakistan’s security apparatus now remains the central target of these terrorists. Images of flesh and blood, amidst twisted metal and plastic bars adorn television screens almost every week.

It is in this context that we need to evaluate the new twists and possible strategies in the ongoing war against terrorism. Recently Pakistan’s prominent daily, The News, came up with the scoop, “US Yearns for Pak Capitulation” which disclosed that US administration has put up eleven demands to Pakistan. As soon as it was confirmed, by the ministry of foreign affairs, that such or similar US demands do really exist Pakistan’s Urdu Press was up in the arms.

So what are these demands? To be honest some of them are really interesting. For instance US has demanded among other things that US military and auxiliary personnel be: allowed in Pakistan without visas; allowed to wear uniforms and carry arms; be exempted from Pakistani laws; allowed inspection free import and export of all equipment and be allowed all necessary radio spectrum. There is yet another: US personnel be waived from all claims of the loss of life and property.

May Allah, Bhagvan and Christ all forgive me for any exaggeration. But in all fairness this demand list reminds me of either the conquered Japan after Hiroshima and Nagasaki under McArthur or post- Saddam Iraq being restructured under Paul Bremmer. But what is happening in Pakistan?

This “demand list” appeared a day or two after the investigative stories in Asia Times Online, by Saleem Shahzad, who claimed that a joint Pak-NATO operation is in offing inside Pakistan’s tribal areas. Other reports — albeit not confirmed — suggest that around 750 US Special Forces personnel will take part in the operations against Taleban inside Pakistan. Is this really true? I am not sure, but if you connect the dots, especially the nature of the US demands cited above, then this appears to be the game plan.

But what an irresponsible act? No one in Pentagon, with a functioning brain, can really imagine that a hard military push involving US personnel will achieve lasting results. And what about the stability of Pakistan as a society even if some temporary results are possible in the mountains?

If this really is a serious plan then this appears to be motivated more by the political considerations of a Republican administration in the run up to an election rather than the concerns for stability, or the long term US interests, in this region. Ironically it may even lend credence to the “Hameed Gul School of thought” that argues that the real purpose of US policies is to create such chaos in Pakistan that the demand for “institutional denuclearisation” starts looking natural and justified.

Unfortunately the suicide terrorism in the Muslim world correlates directly with the US military presences. Seminal work of Professor Robert A Pape of the University of Chicago offers clear insights into the whole process. Pape clearly points out that suicide bombing is not related to fundamentalism per see and neither is it the domain of any particular religion; Jews, Buddhists, Hindus and seculars are all fully capable of turning into suicide warfare given the compelling set of circumstances.

When Professor Pape published his land mark work, “Dying to Win: the strategic logic of suicide terrorism” he followed a data from 1995 to 2003, studying the pattern of 71 Al Qaeda related suicide bombings. Ironically he had then cited Pakistan, as one of the five major Muslim fundamentalist populations with the least inclinations towards suicide bombings.

Majority of the suicide bombing tendency was then clearly exhibited among populations like the Saudi Arabians and the Arabian Gulf directly exposed to the US policies and personnel. Now add to this the fact+ that fundamentalist Iran has not produced any suicide bombers but erstwhile secular Iraq became the biggest center for suicide bombings. In the last two years as Musharraf increasingly budged under the US mantras of “should do more” — especially since our mismanagement of the “Lal Masjid Crisis” — Pakistan has now become a hot bed of suicide bombers. Other observations should be even more interesting. Pakistan’s northwest stretching from Afghanistan to the Indian controlled Kashmir has experienced a continuous conflict since 1979; first as a result of the US and Pakistan sponsored Afghan struggle against the Soviet military and later as a result of Pakistan supported Kashmiri insurgency against India. But we should ask: how many suicide bombings were heard of against the Soviets or against the Indian army?

Two central ingredients of suicide bombings are: extreme asymmetry of struggle and polarisation of mind. Both elements remained missing in these earlier conflicts. Despite our propaganda against the Indian army in Kashmir and notwithstanding certain instances of human right violations the Indian army has fought the Kashmiri insurgents through patient traditional counter-insurgency methods.

In the case of the US military dealing with the Muslim populations the elements of asymmetry and polarisation are inbuilt. Asymmetry is in the nature of hyper power and polarisation is the gradual accumulation of half a century of Muslim perceptions about US in the overall context of its Middle Eastern policy. Given the strong influence of domestic politics on US foreign policy it is unfortunately not capable of sustaining any positive signal for any substantial period to have significant change of perceptions in Muslim consciousness.

The first and foremost challenge for the new political leadership will be to negotiate with the US, and build trust in a way, that ensures that the war against terrorism is prosecuted only and only by the Pakistani military without a shadow of the US personnel and their gadgets.

I don’t remember the last time I went to a mosque, but trust me I want to stop at a red light without the fear of being blown up.