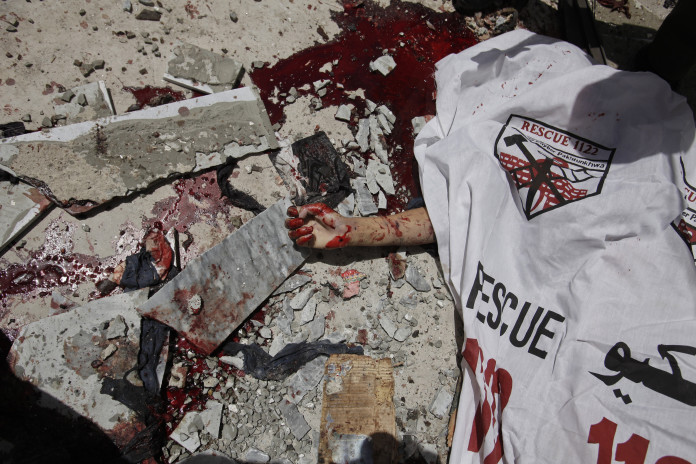 First we see the images of blood pools, scattered limbs and charred torsos on our TV screens, then we watch the histrionic cries of the survivors and then we hear that ludicrously reassuring news-item that the head of the bomber has been found and the police have started their forensic investigations.

Suicide bombings and these gory scenes have now become part of our tortured consciousness.

And just like Iraq, unless the figure of dead and dying is a good double digit most of us listen, as if in sleep walking, and continue with our daily routines. Perhaps there is nothing unusual about it; we are getting used to, we are getting desensitised. This is human nature but then the terrorists also realise this and they aspire to kill more of us to make their own impact.

Naturally the bombings outside the gates of the Pakistan Ordinance factories in Wah Cantt — some 30 kms from the twin cities of Pindi and Islamabad — demanded attention for they were deadly: more than 70 killed and well above 100 injured. But these were important for another reason: they now represent the continuing trend of our military under attack and a growing impression that the Pakistani military is unable to defend itself.

This may be a false impression. Terrorists at Pakistan Ordinance factories — just like the attacks at the Bagram Air Base in 2007 and the Indian embassy in Kabul in August this year — have chosen to attack the easily targeted workers outside the gates of an otherwise protected premises. Many across the world will remember that the 2007 attack at the Bagram Air base, in Afghanistan, was timed with the presence of the US Vice-President Dick Cheney inside the base to send the message that he was under attack though the possibility of Taleban ever reaching him was infinitely remote. Nevertheless the symbolic value of such attacks is unmistakable.

Maulvi Umar, that ubiquitous spokesman, of that shadowy outfit, Tehrik-e-Taleban Pakistan (TTP), while admitting responsibility for these attacks cited them as retaliation on “killer factories” for the military operations in Bajaur agency. Taking his words along, these bombings then serve at least two distinct purposes: One, they serve to expand the political space of the TTP as a defacto representative and champion of the rights of the tribal people in Bajaur. Second, it sends the message, that Pakistani military, even in its heart, is not safe from the counter reach of the Taleban.

Both are important strategic moves of long term consequence and implications however I want to focus on the second one for it has serious international dimensions — which is my area of interest. Pakistani state possesses nuclear assets and, despite popular apprehensions or even targeted propaganda, many professional analysts in the West — for instance Michael Kreppon of Stimson Center in the US in recent Senate testimonies — have argued that Pakistan’s nuclear assets are safe as they are guarded meticulously by the military. But if terrorists can continue to demonstrate their ability to knock at the gates of compounds presumably protected by the military, then it is bound to erode even this argument.

Who controls Baitullah Mehsud? Who provides him sophisticated encryption technology? How has he survived so long despite being accused of the murder of Benazir Bhutto and despite throwing a gauntlet to the country’s military? These and many other questions are already on many minds, if not on lips. But now with the attacks on Pakistan Ordinance factories and their international implications, we may add: who inspires his strategic vision?

But let’s come back to the issue at hand: ironically with every suicide bombing there appears a rather customary assertion by police or government officials that no defence is possible against a determined suicide bomber. This apologetic assertion by the police has a wider context. Given the nature of discussion we have on the war against terrorism in the media, most people in Pakistan, despite their growing despondency, also expect that some kind of political compromise or formula may suddenly end the suicide bombings. The dramatic lull after the February elections only reinforced this impression.

Unfortunately this may not be true at all. Any political negotiations with the Islamists, presumably if it is possible, will not only be a long drawn affair but will only succeed if, at the same time, suicide bombings become less effective, less potent as a destabilising weapon. And that will not happen by smart politics but by enhancing the policing abilities against the suicide bombers by developing indigenous standard operating procedures (SOP’s).

A detailed discussion is beyond the scope of this piece. However, when we reflect on the last few years it appears that whereas Pakistani security apparatus has relied upon increased projection of dumb authority and fire power it has failed to develop the simplest of the procedures like: fool-proof identifications of people and vehicles that relate to an area; training security personnel in the use of information systems; developing physical profiles of suicide bombers like dress codes and behavorial patterns; minimising crowds at places that may constitute targets and so on.

It is true that neither a ready-made solution is available nor a perfect control possible; but the mental inertia and incompetence of Pakistan’s security apparatus have hugely contributed to the situation in which we find ourselves. For instance, the inability to protect a small planned city like Islamabad, or the diplomatic enclaves should be taken less as an evidence of the intelligence or determination of the suicide bombers but more as a failure of Pakistan’s security agencies to improvise, to meet the new challenge they are confronted with.

Police forces operating in dense civilian populations, with their resource constraints, may be limited in their ability to devise and implement procedural improvisations. But Pakistan’s military has no real excuse. It has to take the responsibility to protect its premises and installations; this is the minimum it can do to ensure the people of Pakistan that islands of security are possible and exist from where a counter control can be exercised. Every good General ought to know: winning a war starts from the mind.