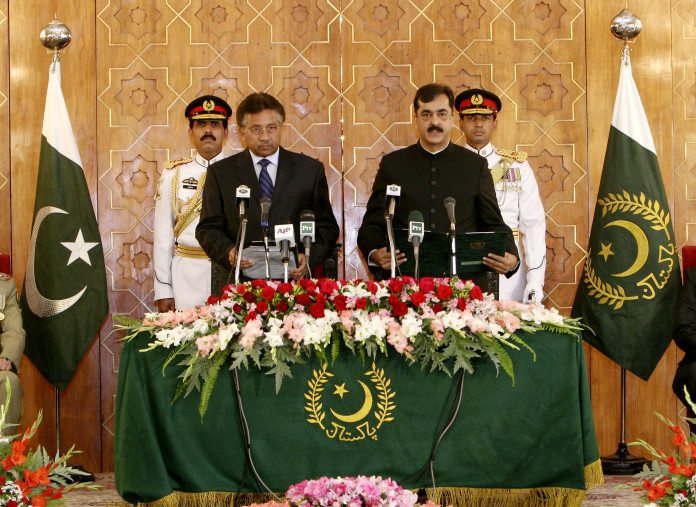 On 28th May, many in Pakistan celebrated or condemned the first ten years of Pakistan becoming an overt nuclear power. But the date had another teeny-weeny element of significance: it almost completed 100 days of Pakistani politicking since the elections of 18th Feb.

In scientific disciplines, from physics to statistics, we have concepts like cross-section; in biology and medicine we have a similar tool: tissue slides. The idea is that we do not churn a whole body of data or put every thing under the microscope but use instead a small part of it to reach conclusions that are then extrapolated to the whole. One hundred days is more than one fourth of a year. Could it then constitute a cross-section, a tissue slide on the aspirations and abilities of the Pakistani politicians?

And more importantly, and in more mundane terms, could this be a window onto their understanding of the exercise of political authority?

If it is then the results do not augur well for them and unfortunately for all of us. Looking back at these hundred days: the winners of a long drawn electoral process, have concentrated every atom of their energy, and of the media, and of the people in an endless and increasingly fruitless debate for and against the restoration of the judiciary. In the last few days PPP has now come up with a 62-point constitutional package that can easily consume the rest of the year in similar debate unfortunately without any solution for the current issues in sight.

I am not saying that the restoration of the pre-November judiciary was not a worthy cause; also it will be unfair to politicians especially to PPP and Asif Ali Zardari to accumulate all blame since lawyers, civil society organisations and media all have ensured that focus remains on the judiciary turning this into a single point agenda. But will it also mean that those who won elections in the name of 165 million people of Pakistan have either no ability or no sensitivity to understand the diverse range of issues that together constitute the public interest?

Some numbers might help. If the statistics of Pakistan Election Commission can be trusted or at least taken as a point of reference then out of the 35 million votes considered valid in the 2008 elections PPP got approximately 11 million (31 per cent), PML (N) around 7 million (20 per cent), PML(Q) around 8 million (23 per cent) and MQM around 2.5 million or 7.4 per cent of the votes cast.

If we keep in mind that in a population of around 165 million more than 70 million registered voters existed we can grasp some idea of the fact that the arithmetic of the electioneering has less to do with the absolute levels of popular support or approval and more to do with a political principle that allows the winners to claim and run a government.

Those who win the elections may only represent a small fraction of the overall population of a country as large and as diverse as Pakistan, and whereas the political principle gives them all legitimacy to form a government and take decisions, the same principle expects them to take into consideration the interests of all people who may or may not have voted for them.

It is precisely in this context that the performance of the last hundred days needs to be assessed.

I am afraid that unfortunately the judiciary debate, over the last one-year, has so contracted our consciousness that we have lost track of this larger reality around us. We read and hear of the regional and international crises but with a detachment as if we live on another planet.

Thanks to this ‘contraction of consciousness’ for which media is to be equally blamed, we are not paying any attention to the fact that economies on both sides of the Atlantic, after years of robust growth, are struggling to ward off the frightening prospects of full fledged recession; international banking industry is under tremendous strain and that after the US the housing market in the United kingdom is collapsing.

We hear but we don’t care that the rising oil and commodity prices in the international markets are adding to these worrisome developments.

Already, the currency markets in Pakistan are under strain thanks in no small measure to the pro-rich policies of the State bank over the last few years and now with the impact of continuously rising oil and commodity prices Pakistan can end up with full blown currency crises — a crisis that can wipe out whatever economic gains the middle classes had made in the last few years.

We have finally admitted that we cannot make the Kalabagh dam. This act of political realism should not obviate the reality of energy crisis. The hopes of gas from Iran-IPI project- may not be realised unless there is a rapprochement between Washington and Teheran, without which New Delhi will continue to flirt with the idea without any real interest — but with misleading implications, for Pakistan.

A series of new nuclear power plants can perhaps solve Pakistan’s energy puzzle? But could we develop an international climate of acceptability for that?

All these issues demand focus, hard work and decision-making. And it still may not be easy. But the politicians for the time being are not even concerned. Till the last news they are busy winning the narrow political debate, on TV, with a view towards the next elections.

The realisation that multiple crises are threatening to erode whatever gains the Pakistani people, nation, and the state had made in the last few years simply do not appear to be part of the political agenda.

But soon it will be issues like these — and not the judges drama on — that are going to pull the rug from under the system. No amount of chicanery and friendly columnists — or should we call them eulogists — might be able to change this reality. Politicians need to understand this — before it is too late.