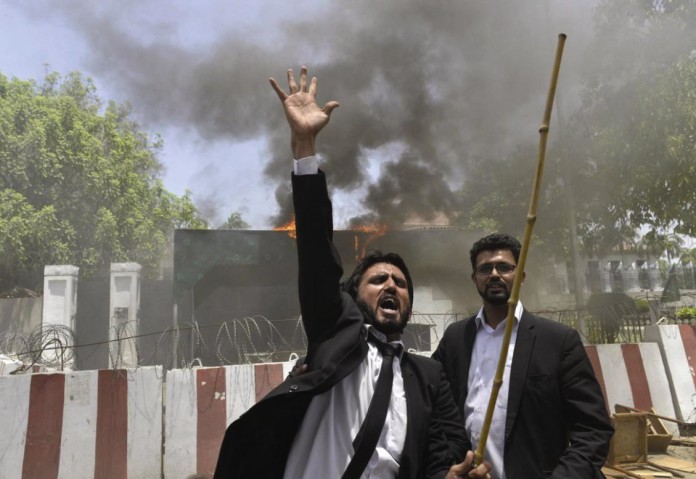 These are great times. Pakistani state, civil society and the judiciary are in a state of flux. Some observers are convinced that a new nation is being born, out of the throes of the old. Eyes are focused on the supreme court with the lawyers forum now demanding a review of the Apex court’s earlier decision on 17th Amendment, and JI a verdict on Musharaf’s uniform; Nawaz Sharif is landing in Islamabad to a historic reception; and Ms Bhutto is about to conclude her deal with the Generalissimo for the umpteenth time.

History is being made. We are marching ahead. A group of intellectuals, courtesy a Lahore based paper, are ferociously fighting on the question: should we have transition or transformation? And the exponents of ‘transformation’ are convinced that finally the time has arrived for the civil society and its advocates to put the genie of the Pakistan army back into its bottle, that is, the barracks.

I don’t want to spoil this propitious mood. In the midst of this “Orange revolution”, who cares for the small negatives here and there? Yet apparently the puny events may have wider implications; for our lives are only a microcosm of our collective consciousness. And one such teeny-weeny incident, which reflects on who we are, took place in the Rawalpindi District courts on 9th August.

A group of lawyers, defenders of the due process of law, elegantly dressed in black coats, thrashed senior advocate of the supreme court, Naeem Bokhari. Inside the court room, right in front of the helpless eyes of the additional district judge, they dragged him of his chair; stripped him of his coat, tore his shirt and pants, threw lentils on his face, struck repeatedly at his head and pelted him with stones. Police had to be called who saved his life, took him for first-aid and gave him shirt and pants to put on. Before that a helpless district judge, instead of calling police or ordering arrests, kept on advising him to run from the back door of his court room. It wasn’t all that bad an advice but for the fact that the “legal revolutionaries” were outside blocking the exits. Bastille had been stormed; lawyers had conquered their own court.

Do I know Naeem Bokhari? Not personally. But-right from my college days I have seen him a zillion times on television. I guess now he must be in his late fifties. I was impressed of his knowledge, his wits, his sense of humour. Yet the moment I read his open letter to the Chief Justice of Pakistan, I like others suspected — though without proof — that this kind of extra-ordinary courage must be in cahoots with some official quarters. On March 9, when the illegal and mindless decision to sack the chief justice was taken, I was convinced — though without any clear proof — that Mr Bokhari must have acted as the advance shock trooper of the presidential attack. And I felt sorry for him for becoming a pawn.

But unlike many others in Pakistan he put his name and signature to his act. I expected that he will face charges for the contempt of the apex court. And, seven months later when the events in Pakistan have moved full circle, I still believe that whatever he has done, openly under his name, can only be judged through the courts.

Let’s move forward. A month has passed since the violence inside the Rawalpindi courtroom. Additional district judge had witnessed at least two things: assault and battery on a senior advocate and open contempt of his court. One wonders if any one has been arrested or any contempt proceedings ordered. Has the Punjab bar council cancelled any licences?

Interestingly, save with the exception of Nasim Zehra and Asghar Nadeem Syed, no columnist stepped forward, no editorials emerged either; and at least one prominent face of the lawyer’s historic movement, in a TV talk show, implied that probably Mr Bokhari deserved what he got. As if this near conspiracy of silence was not enough, a post-doctoral fellow, of all the places at Oxford, invented her new “doctrine of necessity” in relaxation of all principles of civilisation to defend the despicable act, of assault and battery, by arguing that “military touts” will not be tolerated.

This, in Pakistan, is a moment of change. Old order is certainly departing and a new one is taking shape. In times like these it is either safe to stay away from the losers or shout full throttle against them. However those who maintain eerie silence and those who gloat have misunderstood the inter-related realities.

Last year when Barrister Aitzaz Ahsan came to London for the launch of his book, “Divided by Democracy” — which he co-authored with Lord Meghnad Desai — we sat for an hour long television interview. The astute barrister repeatedly referred to the undermining of Pakistani society by the emergence of the national security state.

And what was the worst impact of this national security state? I think it encouraged a systematic process, and a mindset, that was prepared to set aside and disregard the country’s law in the perceived higher national interest. Today we can see the results: once powerful national security apparatus, wriggling in its own blood, is unable to confront the genie it has unleashed upon itself.

I recently asked a retired Judge, who once resigned from Lahore High Court, as to why the district court judge, who was witness to all this, did not order the arrest of the assailants and the wise old man looked at me with innocent surprise, as if I should have known it. “How can he? Pindi bar is very powerful; they will fix him up,” was his reply.

Interesting; isn’t it? So some lawyers are really above the law? Are we witnessing a new selective application and immunity from the country’s law, just like the national security apparatus had done since the Afghan war?

Unfortunately for lawyers, and the legal community, the situation may be a little more precarious. They derive authority, and whatever influence they have, not from sticks and stones, but from the power of the written and the spoken word; their ultimate weapon is their argument. And for understandable reason, in a country like Pakistan, it has never been much. And their antics of using courtrooms as circuses are only going to erode their moral authority.

The chaos that has ruled Pakistan’s periphery for a while is fast encroaching upon the centre. “Transformationists” lead by Dr Ayesha Siddiqa are still thinking that extremists are some fictional creatures out of GHQ’s old cartoon movies; others are not all that convinced. After the gory drama of Lal Masjid, the recent suicide attacks inside the Rawalpindi cantonment should help focus minds on the barbarians that have crashed open the gates. More than ever before, we need to restore the authority and prestige of the district courts. But if they cannot control the “legal revolutionaries”, if they are afraid of bar politics, then please forget about confronting the Islamists; they are somewhat tough.

Will someone consider a suo moto notice to restore the prestige of a district court?