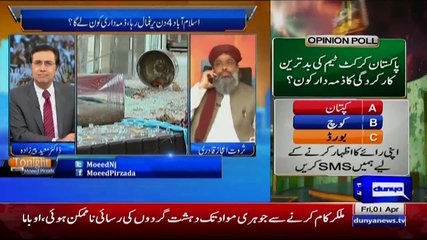 In this Program segment, Tonight With Moeed Pirzada: President of Pakistan Sunni Tehreek Muhammad Sarwat Ejaz Qadri explains the questions raised by Dr. Moeed Pirzada as what were the major achievements achieved from this Four Day long protest on The Constitutional Avenue, Islamabad which not only paralyzed life in Islamabad but also disconnected Islamabad from the World. Dr. Pirzada also inquired as who is responsible for the damage done to public property in the wake of this Protest? Sarwat Qadri categorically said that if these demands mentioned under agreement between Government and Religious Scholars are not fulfilled then they will surely announce “Million March” in near future.