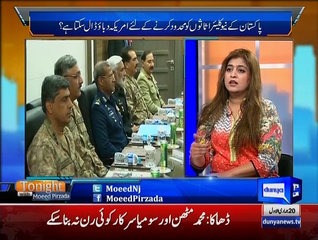 In this part Dr. Moeed Pirzada along with Nuclear Expert Dr Maria Sultan who is also Director General of SASSI discussed different aspects of the coming Nuclear Summit in Washington where Prime Minister Nawaz Sharif and PM India Narendra Modi will likely take part along with other 40 Heads of State. This summit also holds importance as President Obama’s initiative behind these Nuclear Summits which he proposed in 2010 as an important source to build a Mechanism for Reporting and Maintaining Nuclear Technology. Guest of the show Dr Maria Sultan discussed the initiative of this Nuclear Security Summit and President Obama’s stance to put a mutual effort to take measures to maintain and report the enrichment of Uranium and Plutonium. Dr Maria Sultan thinks that President Obama somehow failed to achieve his targets in these series of Nuclear Security Summit .